On September 20, 2018, after a dozen years of delays—partly caused by the complicated cleanup of an old fireworks factory brownfields site—the long awaited regeneration of Dublin, Ireland‘s St. Teresa’s Gardens public housing has been launched. The first phase will create 54 new public housing units.

St. Teresa’s Gardens was initially designed in the 1930s, but wasn’t built until the late 1940s and early 50’s. While the complex was a response to the pre-war housing needs of the population, it wasn’t designed to meet modern living standards.

The City Council has been active over the years in seeking to revitalize this area of the inner city. John Thompson and Partners was appointed in 2005 to prepare a Framework Development Plan for the Dolphin’s Barn Area. The redevelopment of St. Teresa’s Gardens forms a key element of that Plan.

There are plans for a total of 1,100 homes in apartment blocks up to 20 stories high, with half being subsidized or affordable.

An urban park is planned, overlooked by the new dwellings, providing active recreational uses and children’s play facilities. Other works include the provision of a new road network from Donore Avenue and an entrance from Cork Street/Cameron Street into the new development. There will also be monitored CCTV and additional lighting.

Speaking at the launch of the regeneration plan, Sinn Féin local councillor Críona Ní Dhálaigh said there had been “despair” among the local community, due to the long delays.

Commissioned in 2017, the 3 year Strategic Plan outlines how the Regeneration Board and the staff team will work to ensure the progression of the regeneration project for St. Teresa’s Gardens in a timely and positive manner. Construction of the first new 54 social homes at the location is due to commence in the coming months. 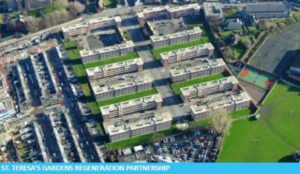 Over the lifetime of the Rebuilding Ireland program, some €211 million will be made available under the Department’s Regeneration Programme for the provision of over 1,000 additional homes, including the development at St Teresa’s Gardens.