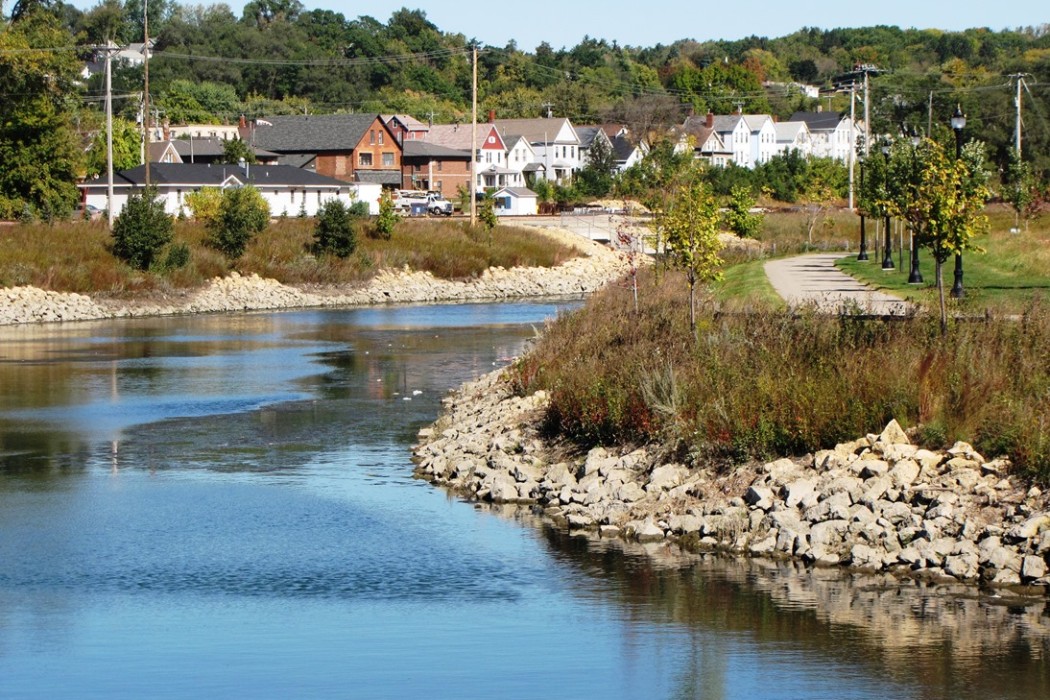 Note from Storm: The good people of Dubuque, Iowa (widely considered the most beautiful city in Iowa) were kind enough to hire me to keynote their 7th Annual Growing Sustainable Communities conference in October of 2014. It’s a highly-successful regional event that draws over 400 attendees from a surprisingly large area.

Mike Van Milligen, their congenial, highly-dedicated City Manager was kind enough to take me–and my wife, Maria MacKnight–on several tours of their rebirthed city. We saw their revitalized historic downtown warehouse area. We visited their gorgeously renovated Eagle Point Park, one of the prettiest parks in the Midwest. We saw their restored Bee Branch Creek (pictured above), which civil engineers had (typically) wanted to bury to reduce flooding. They instead made it a centerpiece of revitalizing a lower-income neighborhood. 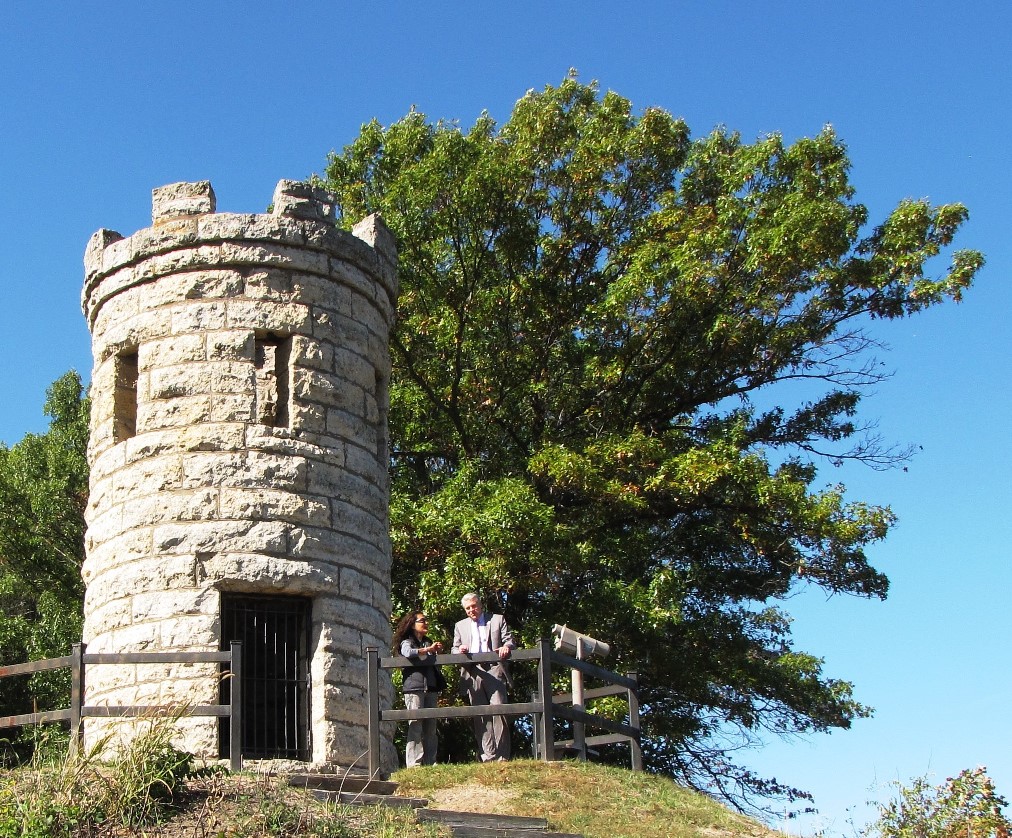 Pictured above: Maria MacKnight and Mike Van Milligen at the Julien Dubuque Monument in the 1380-acre Mines of Spain Recreation Area just south of the city.

Mike, along with visionary Mayor Roy Buol, and sustainability leader Cori Burbach–among other lovely folks I enjoyed meeting–count among my favorite urban revitalization teams anywhere on the planet. This is partly due to their holistic, collaborative approach; renewing natural, built, and socioeconomic assets in a connected, people-focused manner. And it’s partly because they know the value of maintaining momentum. Too many cities throw themselves into a grand project, and then sit back for a few years once it’s done. That’s a formula for failure that I’ve witnessed many times the world over.

What I saw happening in Dubuque was a revitalization process many places could learn from. Dubuque’s reputation as a revitalization leader is probably a major reason their Growing Sustainable Cities conference is such a long-standing success. There are many attractive, interesting cities all around the world, but there’s a very special healing energy in those that are coming back to life. It draws people who hope some of it will rub off on them.

From the article: In the 1980s, Dubuque, Iowa, was down and out, or so it seemed. The farm crisis that had swept across America’s grain belt hit Dubuque’s agriculture-based economy especially hard – at one time bringing the city’s unemployment rate to a nation-high 23 percent. Its Mississippi riverfront, arguably the community’s most precious asset, was a tangled mess of scrap yards, rusty oil tanks, shuttered factories and dilapidated warehouses.

By the end of the decade, thousands of people (nearly 8 percent of its population) had left the city for greener pastures and, adding symbolic insult to injury, even the “little old lady from Dubuque” had passed on.

Now fast forward 20 years. In 2010, various organizations, agencies and publications, including Forbes, recognized Dubuque as, among other things: the best small metro for projected job growth; the best small city to raise a family; the third most livable community in the world; the seventh best small U.S. city for economic growth; and one of the 10 smartest cities on the planet. In 2013, for the third time in five years, it was one of 10 U.S. cities honored with the National Civic League’s All-American City Award.

And what about that riverfront? Today, the junk is gone, and in its place, a $500 million facelift that includes a new convention center, hotels, casinos and bike trails; factories converted to high-end restaurants; warehouses transformed into walkable multi-use communities; and the world-class National Mississippi River Museum and Aquarium, a Smithsonian affiliate that attracts nearly 200,000 visitors per year. In 2014, USA Today named Dubuque the fourth “Best American Riverfront.”

The city had reinvented itself as a “Masterpiece on the Mississippi.” But, how did that happen? In a word, said Dubuque Mayor Roy Buol, “Collaboration.”