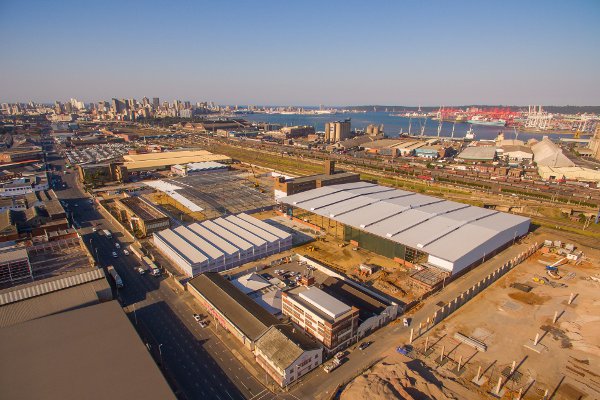 The reinvention of the old Dunlop tire factory in Durban, South Africa will transform it into state-of-the art warehousing. It’s on track, and will be ready for occupation by logistics companies in October of 2016.

Originally built in 1937, the complex at 265 Sydney Road is situated in the heart of Durban’s historic industrial area. Its proximity to the port in the congested harbor economy mean its location is gold.

It is probably the biggest brownfields commercial and industrial development ever undertaken in Durban and you only have to stand on top of the tallest building on site to appreciate how catalytic it promises to be.

Grant Smith, a director at JT Ross – the Durban headquartered property development firm that owns and is developing the 130 000m² site in Sydney Road – said about R1.5 million was already spent on repairing and preserving the original buildings built in 1928 in line with the requirements of Amafa, KwaZulu-Natal’s heritage agency.

Smith said he hopes the new facility will do to Umbilo what the Lion Match redevelopment did in Umgeni Road, spurring on the renovation of surrounding buildings that now house hipster designers, craft brewers and cool restaurants in adjoining Station Road.

Smith said the scale of the development meant it was the anchor address in Sydney Road. “That is where the future of our city’s economy now lives“, he said.

About 35,000 bricks were recycled for use in the new buildings, 10 000m² of concrete and brick was demolished and used as sub-base material under the surface beds. Features such as the original saw tooth profile was retained and a large proportion of the tyre manufacturing plant was sold to other industries rather than dumped as scrap, he added.

Gareth Jones, Managing Director of Swanlite and a member of the Umbilo Business Forum, welcomed the JT Ross development. “This is a fantastic area. Historically and now, it makes business sense, because it is easily accessible. But it needs a clean up. We’re really looking forward to the JT Ross development. It will have a positive impact on the caliber of people this area attracts and the rentals property owners will achieve.”