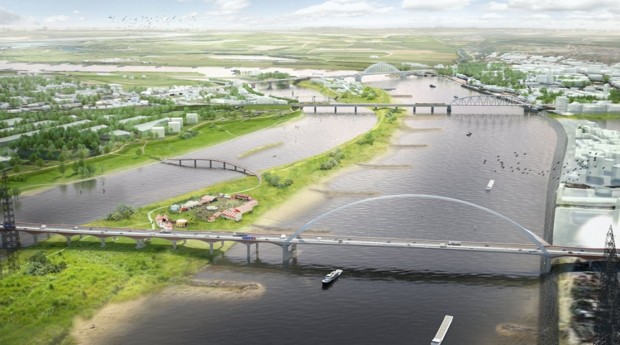 When the 2000-year-old city of Nijmegen, Netherlands launched its Room for the River flood control project, that’s all it was: just a functional bypass in the River Waal. It was a typical single-focus engineering project without any synergies, efficiencies, or fringe benefits.

Then, enlightened local leaders decided to leverage the water project by integrating it with urban regeneration goals. A new island would create an ideal spot for leisure activities such as water sports, walking, and organizing festivals. It would bring nature back into the city and at the same time connect two adjacent protected areas that are habitats for birds and plants. Meanwhile, across from the city center on the north shore of the Waal, a new riverfront promenade would anchor an expanded residential area with great views of the city.

A new neighborhood is now rising across the river from the city center, bringing some balance to the urban development on both sides of the river. And four new bridges are being built, connecting the new island to both sides of the river. When it is all done, Nijmegen will have a new urban heart in the middle of the very river that has occasionally threatened its existence.

“For the first time,” says Alderman Bert Velthuis, “the city center will actually be in the middle of the city.”