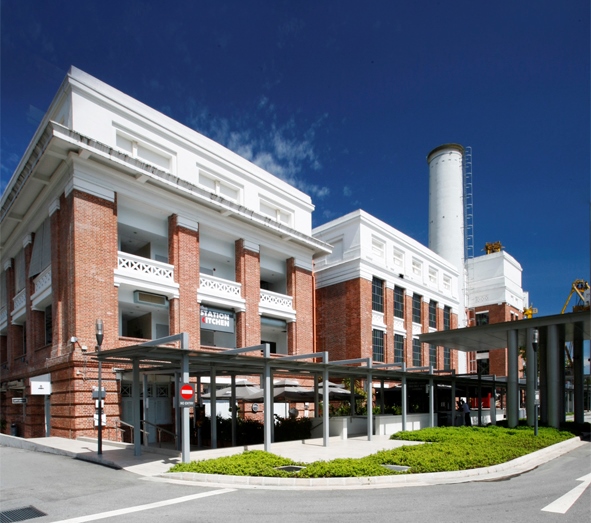 You’ve probably seen articles about the controversy over Sir James Dyson‘s relocation of his company (Dyson) headquarters from England to Singapore. He is an outspoken advocate for Brexit, so he has been accused of hypocrisy as a result of the move.

However one feels about the move to Singapore, one can feel good about his choice of buildings: he is moving into the historic, restored St. James Power Station.

Dyson’s CEO, Jim Rowan, says that the new location would become “a hive for our research and development endeavours.” The firm has actually had a presence in Singapore for a dozen years, and Dyson himself lives there, in the city’s largest penthouse. But Rowan says that the company had outgrown the technology center it has occupied there to date.

As a result, Mapletree Investments, which owns the St. James Power Station (SJPS) building, announced on November 28, 2019 that the structure will be transformed into a technology center with a heritage gallery.

Ms. Amy Ng, Regional Chief Executive Officer, South East Asia & Group Retail at Mapletree said, “SJPS is a treasured and iconic national monument with a rich history. As we move forward, Mapletree aims to revitalise the monument as part of the upcoming Greater Southern Waterfront development. From its origins as Singapore’s first coal-fired power station, SJPS will soon find a new lease of life as a centre of innovation, generating exciting ideas and future technologies.”

This is timely, as it will become one of the first elements in the wider “live, work, play” revitalization plans for the city’s Greater Southern Waterfront, as announced by Prime Minister Lee Hsien Loong during the National Day Rally on August 18, 2019.

When completed in the second half of next year, the newly restored and retrofitted power station will provide about 110,000 square feet of space for Dyson, a leading global technology company. SJPS will increase Dyson’s research and engineering footprint in Singapore two-fold, and sit at the centre of its ambitious global expansion.

Befitting its history, the restored monument will house a Heritage Gallery in one of its distinctive chimneys to showcase its contribution to Singapore as a power station. Complementing that, Mapletree will also create a Heritage Trail around the monument featuring maritime artifacts. These plans will be further developed in collaboration with Dyson to demonstrate their care and passion for historical sites, as well as their commitment to Singapore and SJPS.

Rowan explained, “The spaces in which we work have always been important to us – they provide the inspiration and environment to nurture ideas. After 12 years of growth in Singapore, continuing expansion in the UK, and growing sales globally, we have outgrown our current technology centre in Singapore. The historic St James Power Station will be a most inspiring backdrop for Dyson’s people. It will be a hive for our research and development endeavours, as we focus on great technology breakthroughs. I’m very confident that the ingenuity of our engineers and scientists here in Singapore – and the many more who will join them – will continue to drive Dyson forward all around the globe.”

SJPS will be integrated with the larger plans for the entire HarbourFront Precinct—owned and managed by Mapletree—to harness the synergy from the wider transformation of the Greater Southern Waterfront, especially when plans for Pulau Brani and the surroundings are activated after the port moves out.

Mapletree has successfully rejuvenated the HarbourFront and Alexandra Precincts through the redevelopment of the exhibition halls of the former World Trade Centre to VivoCity, and the old Alexandra Distripark and The Comtech into Mapletree Business City.