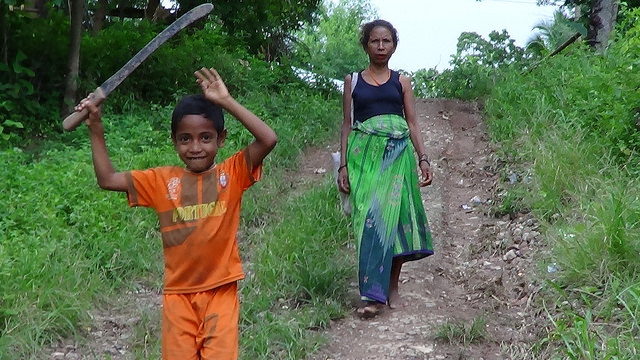 An innovative community reforestation and environmental education program in the mountains of Timor-Leste, one of the world’s small developing nations, that is enabling subsistence farmers to generate income while taking action on climate change.

The program, WithOneSeed, has four commitments: to address environmental degradation through community reforestation, to build village economies through payment to small landholder farmers who grow and maintain forest trees, to educate communities about the importance of trees for climate adaptation and mitigation measures, and to build regional partnerships to collaborate on climate change.

Rural communities in Timor-Leste have relied on subsistence farming for generations, with many subsistence families living on less than a dollar per day. Since the country achieved independence in 2002, our community leaders have been acutely aware of the negative impact of environmental degradation and the importance of environmental regeneration for human survival.

WithOneSeed’s approach is simple in its theory and application. They plant trees and plant ideas. The innovation comes from the annual incentive payments made to subsistence farmers who maintain the trees. If a subsistence farmer has to choose between planting a cash crop or planting trees that may take 20 years to provide a ﬁnancial return, the choice is obvious. However, if we can make a cash crop from trees that sequester carbon, the equation is quite different.

“To put an ‘earned’ dollar is someone’s pocket give them the power to determine their own future. WithOneSeed supports communities to move beyond charity and aid by delivering opportunities for communities and individuals to become economically independent,” says Andrew Mahar, co-founder of WithOneSeed.

East Timor (Timor-Leste) is officially called the Democratic Republic of Timor-Leste. It’s a sovereign state in Maritime Southeast Asia. It comprises the eastern half of the island of Timor; the nearby islands of Atauro and Jaco; and Oecusse, an exclave on the northwestern side of the island surrounded by Indonesian West Timor.

East Timor was colonized by Portugal in the 16th century, and was known as Portuguese Timor until November 1975, when the Revolutionary Front for an Independent East Timor (FRETILIN) declared the territory’s independence. Nine days later, it was invaded and occupied by Indonesia and was declared Indonesia’s 27th province the following year. The Indonesian occupation of East Timor (reportedly approved by the U.S. via Henry Kissinger) was characterized by a highly violent decades-long conflict between separatist groups (especially FRETILIN) and the Indonesian military (which conducted mass castrations of young men in East Timor).

In 1999, following the United Nations-sponsored act of self-determination, Indonesia relinquished control of the territory. East Timor became the first new sovereign state of the 21st century on 20 May 2002 and joined the United Nations and the Community of Portuguese Language Countries. In 2011, East Timor announced its intention to gain membership status in the Association of Southeast Asian Nations (ASEAN) by applying to become its eleventh member.[11] It is one of only two predominantly Christian nations in Southeast Asia, the other being the Philippines.