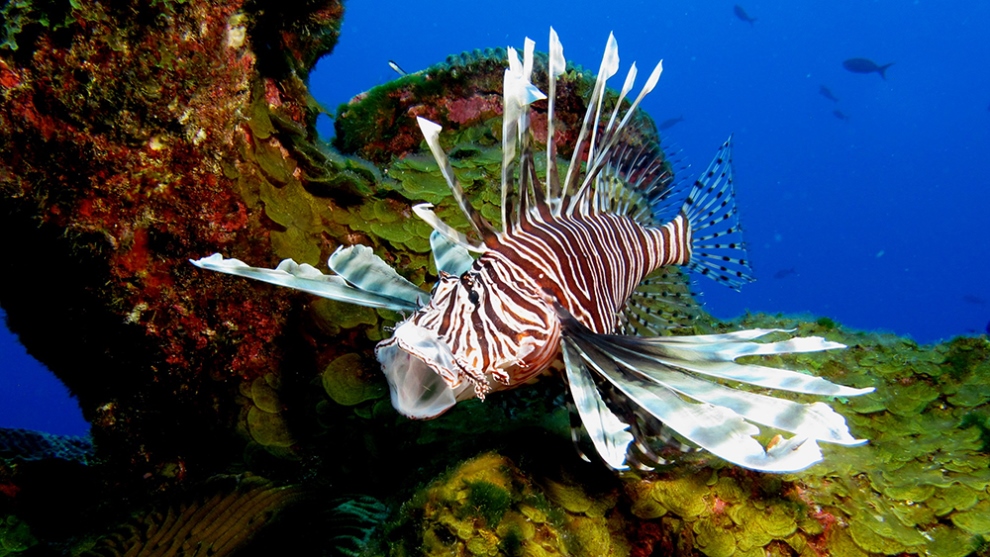 A few years back, I (Storm Cunningham) was snorkeling in Cozumel, Mexico with a local guide who promised to show me some of the best spots that tourists often miss. I was horrified when the site he was most proud of revealing to me turned out to be a lionfish. If I had had a speargun with me, I would have killed it immediately, which—no doubt—would have horrified him in return.

Thanks to a few clueless aquarium owners who thought they were doing a Good Thing by releasing their no-longer-wanted lionfish into the Atlantic waters of the Florida coast, the invasive lionfish is destroying ecosystems throughout the Caribbean and Gulf of Mexico. It’s not just the native species it gobbles-up by the millions…it’s also the run-on ecological effects of those missing native species.

Lionfish (Pterois volitans, Pterois miles) are venomous (not poisonous) fishes native to the Indo-Pacific and Red Sea, are the first invasive species of fish to establish themselves in the Western Atlantic. Although they are quite beautiful, they are also skilled predators capable of eating any fish or invertebrate that will fit in their gaping mouths, and they have toxic spines that can cause serious injury to people.

The first lionfish recorded in the Western Atlantic (east coast of the United States, Caribbean Sea and Gulf of Mexico) was a specimen captured near Dania, Florida in 1985. No other lionfish sightings were reported until 1992.

At first, the spread of the lionfish population was rather gradual, but in 2000 the number of sightings began to increase exponentially. By 2009, lionfish were pretty well established along the Atlantic coast and throughout the Caribbean. In 2010, sightings were also recorded in the northwestern Gulf of Mexico, along the coasts of Alabama, Mississippi and Louisiana. In July 2011, the first lionfish was observed in the sanctuary, at Stetson Bank.

Lionfish are indiscriminate eaters. If it fits in their mouths, they will eat it. This includes many smaller species of fish and invertebrates that are important herbivores, keeping algae in check on the reef. It also includes the young of commercially important fish species, such as snapper and grouper. Not only can this affect the ecological balance of the reef system, but it’s also impacting fisheries.

One upside: due to their highly-toxic spines, lionfish fear no one, so they are easy to kill. But that culling must be done by hand, one by one.

Another upside: the lionfish is good eating, so lionfish hunting tournaments and cookouts are springing up wherever there are educated people who wish to help undo this human-caused assault on the environment.

For instance, a total of 19,167 of these spiny, invasive predators were removed from Gulf and Atlantic waters as part of the Emerald Coast Open, which coincided with the fifth annual Lionfish Removal and Awareness Festival at AJ’s Seafood & Oyster Bar and HarborWalk Village in Destin, Florida on May 18 and 19, 2019. That’s a lot of lionfish, but we need hundreds of additional such tournaments to make real progress.

The Florida Fish and Wildlife Conservation Commission (FWC) worked closely with the Emerald Coast Convention and Visitors Bureau on both the tournament and the festival.

This tournament may be over but there are still chances to win prizes through the FWC’s 2019 Lionfish Challenge, a removal incentive program that started May 18 on Lionfish Removal and Awareness Day and runs through Labor Day (Sept. 2).

This year, participants who submit the largest and smallest lionfish may be eligible to receive up to $3,000 in cash prizes thanks to support from sponsors: American Sportfishing Association, Yamaha Motor Company, Marine Industries Association of Palm Beach County and National Marine Manufacturers Association.

Photo of lionfish courtesy of FGBNMS / A. Sterne / NOAA.

Learn how to get rewarded for your lionfish removal efforts in Florida.