Who makes urban space? How do you decide which route to take to work, or where to spend a sunny day? Anyone who has ever stepped off a paved footpath to take a shortcut knows that citizens do not follow an instruction manual. City planning provides an outline of how urban space can be, and the habits and preferences of the people who live there make that space into a home.

In Germany, the city of Dortmund is regenerating some of its most critical former industrial spaces and understands the value of including local residents in the process. 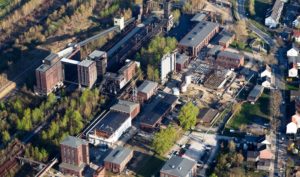 Photo of Hansa Coking Plant in Dortmund (2014) by Christian A. Schröder via WikiMedia

Dortmund quickly grew around the thriving coal and steel industry from the 19th century. The Hansa coking plant opened in 1927, employing workers and creating a community of families living near the plant. Their homes were heated by emissions from the industrial plants via a huge pipeline encircling the city’s perimeter of the city and their household waste dumped on the neighbouring Deusenberg hill, which lies directly to the east of the Hansa coking plant. Wastewater from the population, mining companies, and industry was directed into the Emscher River.

Starting in the 1950s, the mines were becoming unviable and closed within the following decades. The Hansa coking plant followed in 1992, leading to job losses and severe social decline.

In Dortmund and across the German Ruhr area, the buildings and landscape intended for a previous era no longer served their purpose. A large-scale investment into re-purposing former industrial infrastructure for cultural use led to the phenomenon of “Industriekultur”: a large network of museums in former industrial buildings across the whole Ruhr area that were opened following through large-scale regional, national and international investment.

In recent years, the Hansa coking plant was turned into a museum and event location. The former Deusenberg landfill now has cycling and walking paths, and solar panels have been fitted to the top, although it is currently mainly accessible from the east side and not yet linked to the Hansa complex.

The Emscher River has been renaturalized and the Mooskamp depot has been converted into a transport museum and houses a training initiative for long-term unemployed people.

But the people of Dortmund have bigger ambitions for their former industrial landscape. The industrial buildings at the former HSP-site, which are unused and unrenovated, are planned to be the new location for an artificial lake as well as living and working sites.

The area north of Hansa coking plant will partly become an innovative industrial site focusing on companies related with the energy sector (“energy quarter”). The Mooskamp transport museum will extend its existing train connection and the train infrastructure will be upgraded.

The Emscher river will be further restored as the “Emscher Nordwärts” green corridor, serving to retain water, control flooding and offer the people of Dortmund some attractive green riverbanks to visit in their free time. Part of the Hansa coking plant will be converted to office space and an event hall, the complex will be developed as an open space and park, and it will be connected to the Deusenberg hill via a footbridge.

With these changes ahead, it is important to ensure that the design of the new urban space is tailored to the people who will spend their time there in the future. In Dortmund, integrated planning strategies have been realized during the past 2 decades.

“Currently, Huckarde gains a lot of attention as we realize an urban renewal program there to improve living conditions. In 2027 the International Garden Exhibition IGA will take place on Hansa coking plant and its surroundings,” says Susanne Linnebach, Head of Department of Urban Renewal, City of Dortmund, says. “ProGIreg is one several programs to jointly improve the green infrastructure in Huckarde.”

For proGIreg the City of Dortmund has teamed up with RWTH Aachen University, local NGO Die Urbanisten, international city network ICLEI, a group of 7 other cities from around Europe and China, researchers, urban design companies and NGOs to understand the current and future social life that will happen in these spaces, and ensure that the new developments improve citizens’ quality of life.

The project, proGIreg: Nature for Renewal, is planning and testing nature-based solutions in Dortmund, Zagreb and Turin in a process of co-creation including citizens, scientists and private companies.

In Dortmund, the developments described above will be supplemented by green interventions on the post-industrial sites. Community-based urban farming and gardening will be developed on post-industrial sites, providing citizens with access to sustainable food and helping people to meet their neighbours. Aquaponics will be introduced, which is a method of breeding fish in combination with growing plants.

The Huckarde borough will be connected with the renatured Emscher River and Deusenberg sites, biodiversity measures will make the area friendlier to bees and outreach activities will bring science closer to citizens.

In December of 2018, Dortmund held a workshop to begin this process. Around 20 people including Dortmund’s city government, non-profit-organization ‘die Urbanisten’, representatives of the Foundation for Industrial Heritage, an umbrella organization of associations in the borough and a local artist met on December 7 to kick-start development of a so-called “Urban Living Lab”, where the nature-based solutions should be tried out with a group of different organisations and citizens. As part of the workshop, they envisioned the future of the Huckarde area in 2030, considered the gradients and types of participation processes and worked to jointly develop a cooperative management structure.

Bettina Wilk of ICLEI – Local Governments for Sustainability said, “At the December workshop for the first time all stakeholders and project partners gathered around one table, thereby kick-starting a closer collaboration between the different NBS leads and aligning perspectives. Connecting Huckarde with Dortmund in its widest sense and embedding Huckarde’s industrial heritage in a future-oriented identity that is based on green infrastructure, innovation and participation is the ambition that Dortmund is now well set to embrace.”

The project will run until 2023 and invites local residents and people interested in the development of the area to become involved in the co-creation process. Interested people are invited to contact proGIreg at progireg@la.rwth-aachen.de.

Featured photo by Eselsmann via Wikimedia shows the Emscher River south of Dortmund.

This article originally appeared on the proGlreg website. Reprinted here with permission.