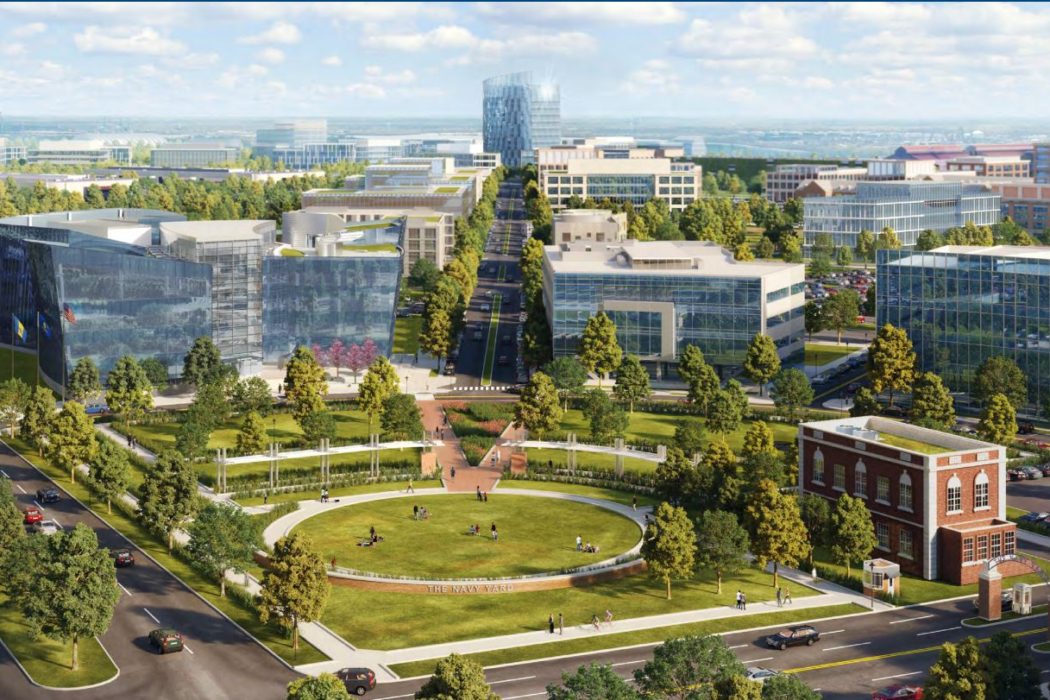 When choosing a location last fall for a new-product development center in the Philadelphia, Pennsylvania metropolitan area, industrial paints supplier Axalta Coating Systems had a typical real estate checklist: its own building, convenient access, and locational tax incentives. Yet, as a recently spun-off company from chemical products conglomerate DuPont, Axalta also wanted to use the location as a way to create its own identity.

So Axalta is moving to a place that has been successfully creating its own new identity: Philadelphia’s Navy Yard.

From a closed former military base on the south side of the city, the Navy Yard has become one of the most successful office/industrial master-planned redevelopments in U.S. history.

It has attracted $1 billion in public and private investments since 2000, bringing in more than 150 corporate and technology-oriented companies, and becoming the workplace for some 12,000 employees.

The Navy Yard is a 1,200-acre dynamic and urban development, offering the Philadelphia region a unique and centrally-located waterfront business campus committed to smart energy innovation and sustainability. The Navy Yard is home to more than 12,000 employees and 152 companies in the office, industrial, manufacturing, and research and development sectors, occupying 7.5 million square feet of real estate in a mix of historic buildings and new high-performance and LEED® certified construction.

But what really sets the Navy Yard apart from typical office/industrial parks is a sense of place unlike that to be found anywhere else in its region. Upon driving in, a visitor immediately sees magnificent and imposing navy warships—the site remains a reserve basin for retired vessels. 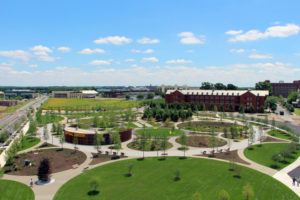 Beyond that, there is turn-of-the-20th-century historic architecture along with suburban-style glass office buildings.

Spanning over 1,200 acres, this sustainable, progressive campus is a living monument to the spirit of collaboration, business growth, and partnership between the more than 145 companies located here.

In 2013, the Master Plan was updated, building upon the successes to date, with an expanded vision of what’s to come.

At full build-out, The Navy Yard will support up to 13.5 million square feet of development, 30,000 people, and over $3 billion in private investment.

There is a waterfront plus a park featuring hammocks and Ping-Pong tables. There is the ambience of an academic campus, thanks to buildings with odd shapes, large open spaces, and people walking on sidewalks. 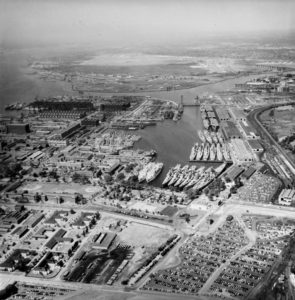 Reserve Basin of Navy Yard in 1955

Philadelphia’s original navy yard, begun in 1776 on Front Street and Federal Street in what is now the Pennsport section of the city, was the first naval shipyard of the United States. The new, much larger yard grew up around facilities begun in 1871 on League Island at the confluence of the Delaware and Schuylkill Rivers.

The United States Navy ended most of its activities there in the 1990s, and in 2000, the city of Philadelphia took over and began to redevelop the land. The Navy still has a Naval Inactive Ship Maintenance Facility and a few engineering activities at the site.