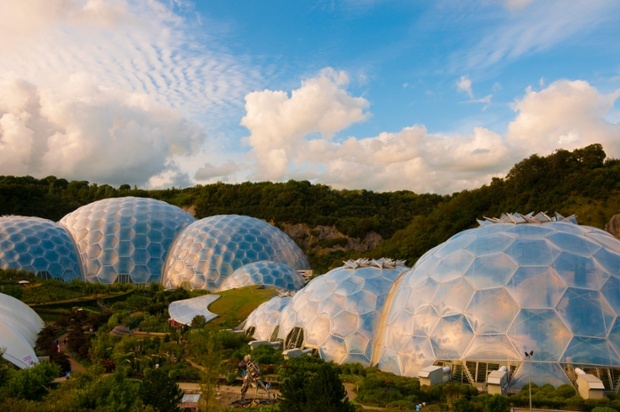 Clones of some of the oldest and biggest coast redwoods have been flown in from the western seaboard of the USA to the Eden Project in the far south-west of Britain as part of a hugely ambitious scheme to preserve the magnificent trees for future generations.

“This will enable the formation of Europe’s first old-growth redwood forest,” he said. “Conditions in Cornwall and at Eden are perfect for redwoods, which help fight climate change by storing vast amounts of carbon. This new plantation will be a library of the tallest, oldest living things on earth.”

Note from Storm: If you haven’t yet visited Cornwall’s magnificent Eden Project, be sure to add it to the itinerary of your next UK trip. It’s probably the world’s most spectacular example of restoring an ugly, dead mining site to ecological and economic health. My meetings with its leaders a few years back convinced me that these folks really “get” the concept of a Restoration Economy.

When this old china clay mine closed, beautiful County Cornwall was left with a hideous scar on its face, not to mention many lost jobs. The Eden Project is now the largest private employer in Cornwall, and is probably the greatest environmental education facility on the planet. Why? Because it focuses on (and demonstrates!) ecological restoration. There are no pristine ecosystems left on Planet Earth, so all conservation efforts must now include some degree–often a huge degree–of restoration.