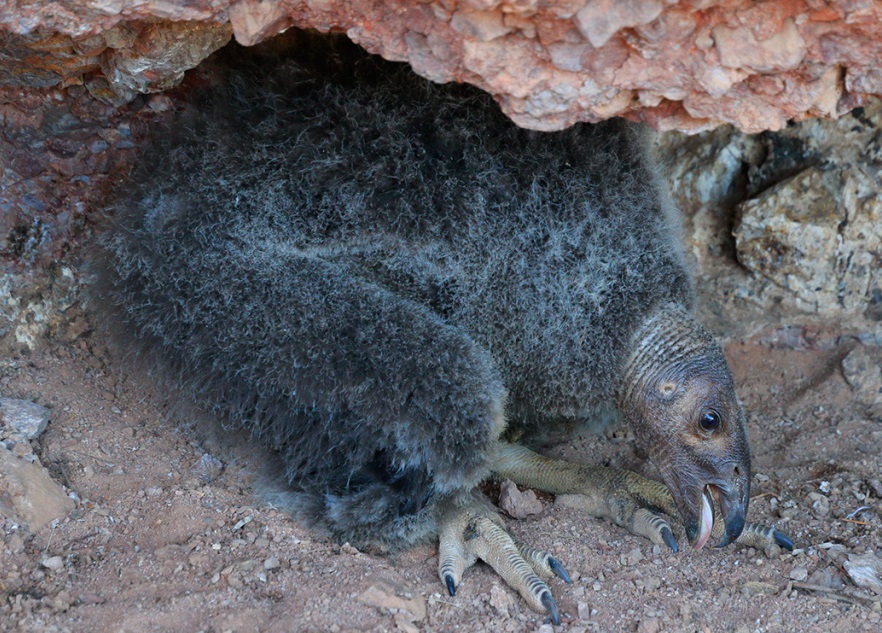 For the first time in a century, a California condor chick in the wild has hatched and left the nest at California’s Pinnacles National Park.

Thirty years ago, there were just 27 California condors left on the planet. Now there are about 250.

Juvenile condors are transferred to Pinnacles from captive breeding facilities (Los Angeles Zoo, San Diego Safari Park, Oregon Zoo, and World Center for Birds of Prey) at approximately 1.5 years old. Juveniles are then placed into a flight pen with an adult mentor bird and allowed to acclimate to their new environment for at least 2 months.

During this time, park biologists regularly observe the juveniles to ensure they are displaying normal behavior. The juveniles are outfitted with radio transmitters, vinyl ID tags, and allowed to leave the pen one at a time. Park biologists continue to closely monitor the juveniles’ behavior as they take their first flights in the wild, ensuring they find appropriate roost and feeding sites.

The park’s namesakes are the eroded leftovers of the western half of an extinct volcano that has moved 200 miles (320 km) from its original location on the San Andreas Fault, embedded in a portion of the California Pacific Coast Ranges. Pinnacles is managed by the National Park Service and the majority of the park is protected as wilderness.