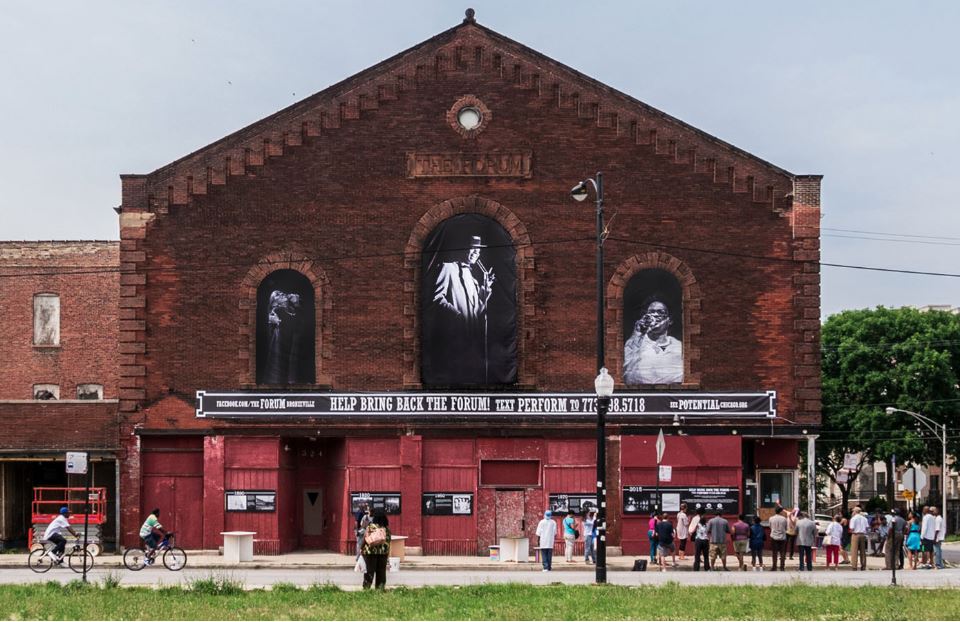 The Forum, in the historic, predominantly African-American Bronzeville neighborhood of Chicago, Illinois, has been vacant for more than 15 years, but it still echoes with the music and laughter of almost a century of concerts and celebrations. 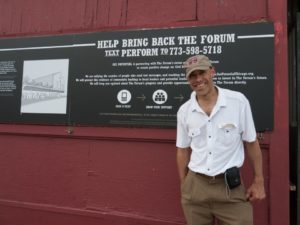 That’s why, when the building was threatened with demolition in 2011, South Side entrepreneur Bernard Loyd knew he had to save it.

“You walk in and it kind of talks to you,” he says of the second-story ballroom space, which hosted blues greats like B.B. King and Nat King Cole.

Originally built in 1899, the former dance hall had been gradually falling into disrepair after being left vacant in the late 1990s, inciting a neighborhood block club to approach their local alderman to request that it be demolished. In addition to looking neglected, the brick structure sometimes posed a danger to pedestrians on the sidewalk below.

“Water washed out the mortar between blocks in the section of the facade about 30 feet up from the ground,” Loyd says. “So when it rained, bricks would literally come raining down on the sidewalk.” 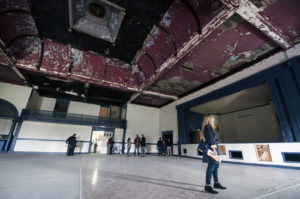 Loyd purchased The Forum days before it was scheduled to be torn down. Since 2011, he’s been working with Urban Juncture, a community development corporation he founded, to bring The Forum back to life as a retail and performance space and help it once again assume its rightful place at the center of the Bronzeville community.

“Buildings are precious To Bronzeville’s revival. For better than 25 years, the Bronzeville community has used its rich architectural resources and vivid black history to slowly lure middle-class folk, investment, and commerce into the area. And it’s been a hard battle. But in that war, buildings as bad off as The Forum have have been saved, restored, and are contributing to Bronzeville’s resurrection,” said architectural photographer Lee Bey back in June of 2011.

After the closure of “Forum Hall”, the second floor performance space, in the 1970s, the building fell into disrepair.  In 2011, Urban Juncture Inc. stepped in to rescue The Forum from city-ordered emergency demolition. Over the last few years, Urban Juncture has made important structural repairs to the building and has hosted several events (on the wide sidewalk and street just east of the building) in collaboration with partners including IIT Urban Activators, Revival Arts Collective, Bronzeville Retail Initiative, See Potential, O.U.R. Block Club, Chicago Film Archives, South Side Community Arts Center, and Chicago Architecture Foundation.

Urban Juncture Inc. has begun the design process for the complete restoration of The Forum, beginning with redevelopment of the first floor spaces into hospitality and performance/gallery venues.