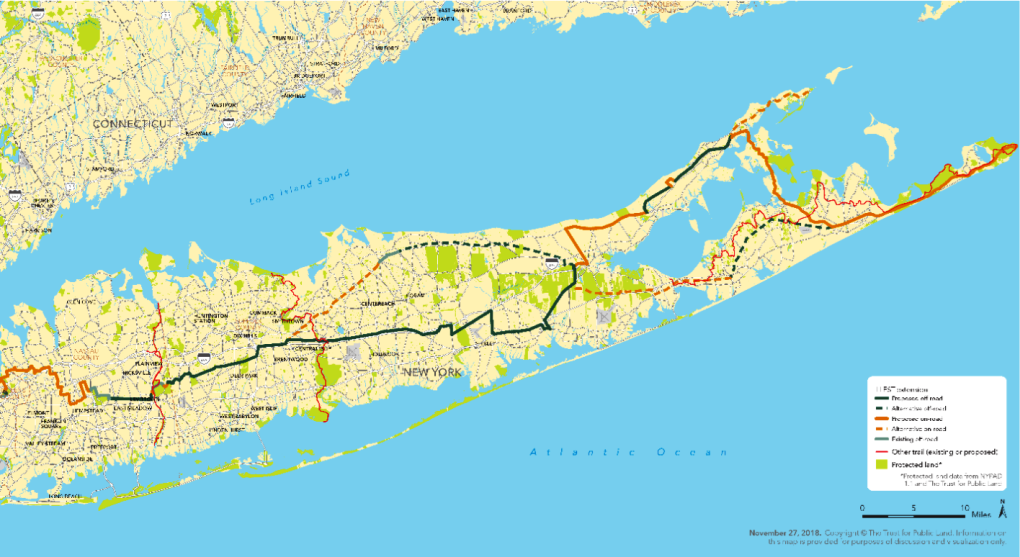 In February of 2019, the Trust for Public Land and the New York Bicycling Coalition released a report that maps-out a potential east-west multi-use trail across Long Island from Manhattan to Montauk, extending the Empire State Trail by 173 miles, thus allowing the trail to cross the entire state.

“This program will simultaneously attract tourists while reducing traffic congestion in already choked areas such as the North and South forks,” said Martin and Elyse Buchman, owners of the Stony Brookside Bed & Bike Inn. “The trail during its construction will provide meaningful jobs, permanently enhancing the economic viability of dozens of tourism related industries.” 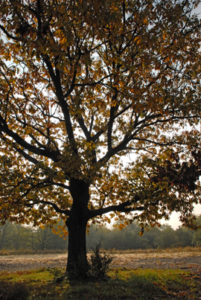 Currently, the Empire State Trail extends from Buffalo and Plattsburgh to the Battery in Manhattan for a total of 750 miles and will be completed in 2020. The trail does not currently include Long Island, whose dense population makes a route difficult but also ensures that any path would create significant health, economic, and social benefits.

Carter Strickland, New York State Director of The Trust for Public Land, said “A trail on existing infrastructure that links together Long Island communities and parks will provide many benefits, including nearby opportunities for residents to get healthy by walking, jogging, or biking, sustainable transportation to jobs, neighbors, or the train station, and a weekend adventure for friends, family, and tourists. Let’s ride!”

The study concluded that it is technically feasible to create a cross-island trail using a combination of 64 miles of on-road segments and 78 miles of off-road segments in Nassau and Suffolk Counties, with much of the off-road segments consisting of utility corridors for transmission lines that are already in the public domain and controlled by the Long Island Power Authority. The routes were selected with extensive input from Nassau and Suffolk County government officials, key business leaders, and biking and hiking clubs.

Nassau County Executive Laura Curran stated that “It is very exciting to be a stakeholder in the Trust for Public Land and New York Bicycling Coalition’s initiative to promote the reuse of the historic Long Island Motor Parkway to create a non-motorized transportation and recreational asset for all Nassau and Suffolk County residents.”

The proposed trail will connect communities across Long Island and will improve the park access of many communities. It will also connect many of the isolated trail systems in Long Island’s excellent state and local parks, and intersect several north-south trails such as the Nassau-Suffolk Greenbelt Trail and the Long Island Greenbelt Trail, creating the potential for multi-day biking and hiking tourism, as well as a travel corridor for local everyday bicyclists and walkers. The estimated cost of the trail in Nassau and Suffolk Counties is $114 million. Funding from federal, state, and local sources is possible to cover these costs.

“The Empire State Trail Extension will bring a substantial improvement to Long Island’s bicycle infrastructure,” said Elisa Kyle, Placemaking Director for Vision Long Island. “It will not only connect many of our existing recreational trails, but will also help to connect this network to several downtowns, train stations and proposed mixed use developments to further expand our transportation options.” 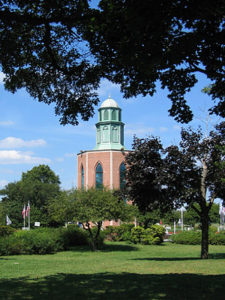 The report also identified a 21-mile pilot project spanning Nassau and Suffolk Counties, from Eisenhower County Park through Bethpage State Park to Edgewood Oak Bush Plains Preserve. It is estimated that phase of the project will cost $20 million, also with possible funding from federal, state and/or local sources.

The 21-mile pilot trail will be a great recreational asset in its own right, connecting several parks and communities. But it will also be the first installment of the 173-mile Long Island Extension of the Empire State Trail. The report recommended the funding of a detailed existing condition study, route alignment, conceptual design, implementation plan, funding strategy, and public engagement for the pilot segment.

“I am thrilled at the progress being made to extend the Empire State Trail across Long Island. This trail will be an important asset for tourists, local recreational cyclists and commuters alike, helping to provide a new, healthy transportation alternative while celebrating the unique geology of ‘fish-shape Paumanok,’” said Suffolk County Executive Steve Bellone.

“When taken together with the efforts of the many individuals and organizations who have worked to preserve and extend trail systems on Long Island, as well as Suffolk County’s upcoming county-wide Hike-Bike Network Study to improve infrastructure for pedestrians and cyclists across the region, the Empire State Trail will help advance our goal of putting a high-quality hiking and biking facility within easy reach of every home in Suffolk County,” he added.

The New York Bicycling Coalition is a statewide non-profit 501(c)3 organization based in Albany that was founded in 1990. Its mission is to promote healthy, environmentally sustainable, and community-friendly active transportation through advocacy and education. NYBC has an active network of supporters and contacts, in and outside government and at the grassroots level throughout New York State, including a longstanding presence on Long Island in both Nassau and Suffolk Counties.

“This proposal has a realistic on and off-road alignment identified through Nassau and Suffolk Counties, and its connection to the current beginning point of the Empire State Trail will make it a truly cross-state route. We’re looking forward to the day when a truly end-to-end linear park and travel corridor is in place to serve all the residents of New York State. At the same time it will become a truly global tourism destination,” he concluded.

Featured image shows a map of the proposed 173-mile Long Island Trail, focused on the 142 miles of the trail in Nassau and Suffolk Counties.

See complete report on the Long Island Extension to the Empire State Trail.