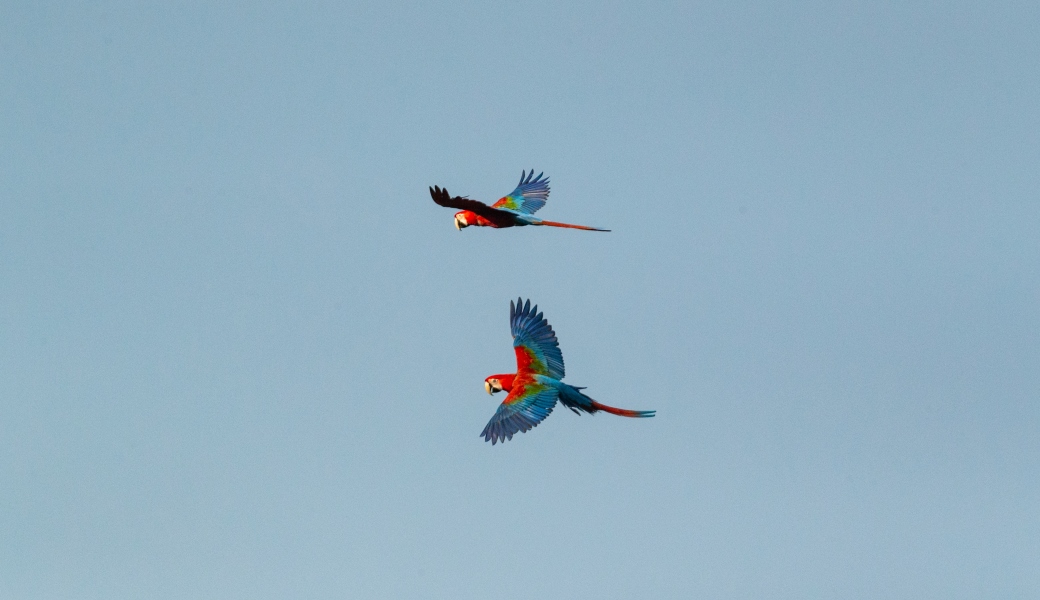 On July 1st, 2022, after wildfires that razed nearly 60% of Iberá National Park and 13% of the provincial park encompassed by Great Iberá Park, four females and a male red-and-green macaw have been released into the wild, joined a group already released in Yerbalito, a northern sector of Argentina‘s Iberá Wetlands.

The species, extinct in Argentina for 170 years, is making a comeback thanks to the joint cooperation between several institutions and governmental authorities. 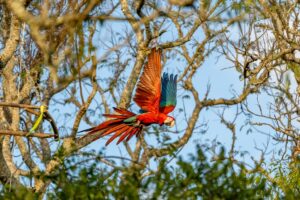 Born in late 2020 in a breeding program in Temaikèn Biopark in Buenos Aires Province, this is one of the largest groups of red-and-green macaws released into the wild so far in Argentina.

Their release had been initially delayed due to the fires, which destroyed part of the onsite aviary. Captive-born macaws need extensive preparation to survive in the wild.

Nearly a year of training by the Rewilding Argentina Team prepared the group to fly long distances, avoid predators and find food, using a new large-scale aviary in the Aguará Conservation Center in the Province of Corrientes.

The red-and-green macaw went extinct nation-wide mainly due to the exotic pet and illegal feather trafficking and deforestation.

According to Sebastian Di Martino, Director of Conservation of Fundación Rewilding Argentina, “The large-scale wildfires in the Corrientes Province laid bare the crucial role of this large-seed disperser. As a forest regenerator, the macaw will help restore a more complete, and functional, ecosystem to an area gravely affected by the fires.” 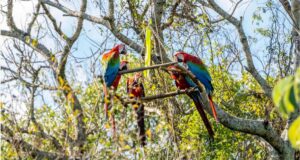 VHF signal collars will enable Rewilding Argentina to monitor their progress in the wild, aided by food supplements.

This work has been made possible thanks to the joint cooperation between several institutions and governmental authorities: the Temaikèn Biopark, Corrientes Province, Rewilding Argentina and its strategic collaborator Tompkins Conservation, a US-based non-profit that initiated the restoration of Iberá by donating the land to create the national park.

Rewilding Argentina is working to bring back a number of species that play a crucial role in Iberá Park, a protected wetland of 1.8 million acres, among them pampas deer, giant anteater, giant otter, collared peccary and the bare-faced curassow.

In parallel, the nonprofit has helped develop a local economy of nature-based tourism, with 10 gateways to Iberá Park that offer visitor services and wildlife watching opportunities.