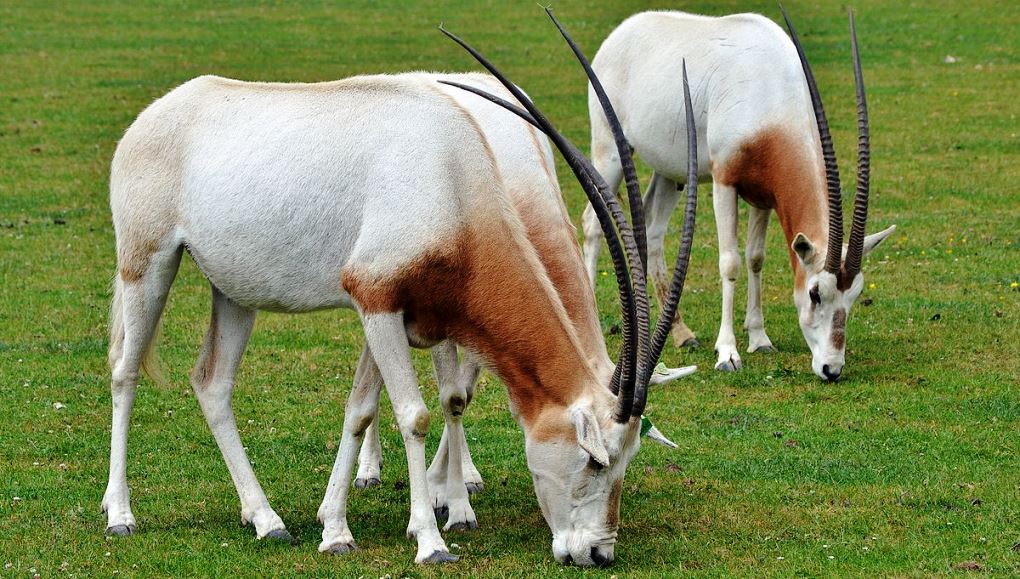 The scimitar oryx or scimitar-horned oryx (Oryx dammah) is also known as the Sahara oryx. It’s a species of Oryx that was once widespread across North Africa, but went extinct in the wild in 2000, due to unregulated hunting. 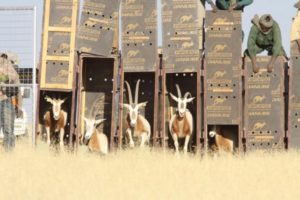 But on August 16, 2017, the wild population increased by 54, as the Environment Agency of Abu Dhabi (EAD) released a large group of captive-bred scimitar-horned oryx into the wild in Chad.

The latest release brings the number of animals in the wild to 89. The reintroduction efforts of the past year have seen the population grow with 16 calves now recorded as being born in the wild.

Razan Khalifa Al Mubarak, EAD’s secretary-general, said, “We have a long way to go before achieving our target of 500 animals in the wild. But our progress thus far is already exceeding expectations. We have now had animals in the wild for over a year, they are showing every sign of not only adapting to, but thriving in their new environment.” 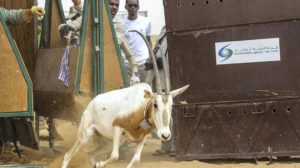 “We are accumulating invaluable scientific information that will help not only ensure the success of this project, but inform and inspire other reintroduction projects across the globe. The ambition of this project is immense; it is the world’s greatest large mammal reintroduction effort,” Al Mubarak continued.

The EAD along with their project partners the Chadian Ministry of Wildlife and Fisheries and the Sahara Conservation Fund aims to achieve a wild free-ranging, self-sustaining population of 500 animals in the Ouadi Rime Ouadi Achim game reserve in Chad.

According to the EAD, it is believed that the last scimitar-horned Oryx disappeared from Chad in the late 1980s and the species were officially declared ‘extinct in the wild’ globally by the International Union for the Conservation of Nature (IUCN) in 2000.

The animals selected for the reintroduction come from the ‘world herd’ that the EAD has been curating at its breeding facility in Delaija in Abu Dhabi. 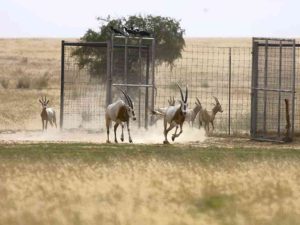 Many of the animals that make up the world herd were generously donated to the EAD from the collection of the late Shaikh Zayed Bin Sultan Al Nahyan.

The genetic diversity of the blood-stock has been increased with the addition of animals that have been kindly donated from a number of zoos and private collectors across the globe.

Al Mubarak added, “The project’s success thus far is the result of the wonderful partnership and commitment from the Abu Dhabi Government and the Government of Chad. We also have numerous members of the world’s conservation community to thank for their continued support of this initiative.”

A very careful selection process takes place at the Delaija facility whereby animals are carefully tested, and prepared for shipment to the project pre-release facility within the protected area in Chad.

After release, the wild herds are protected by wildlife rangers of the Chadian Ministry of Environment and Fisheries.

The EAD is working closely with the Smithsonian Conservation Biology Institute (SCBI) and the Zoological Society of London to carefully monitor the daily movements of the animals in the wild, with the aid of satellite collars.

Featured photo credit: The Land via Wikipedia. All other photos courtesy of EAD.