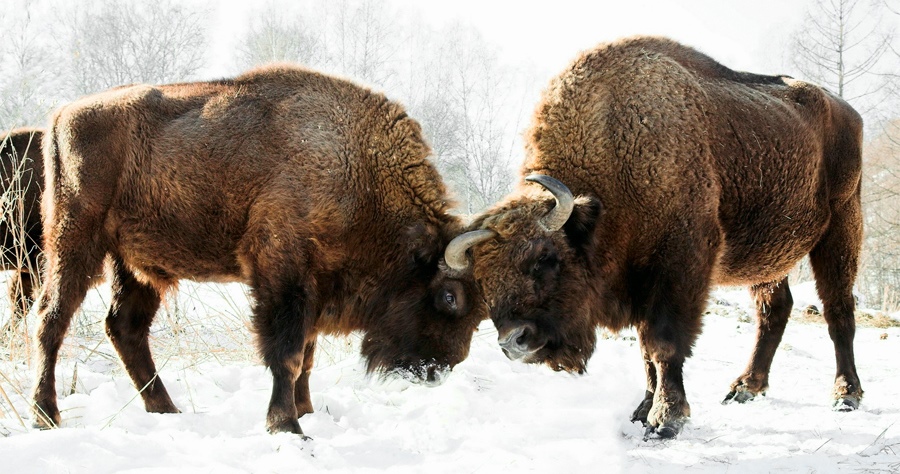 The European bison (Bison bonasus) is also known as wisent, or the European wood bison. It’s actually a Eurasian species, not just Europe.

The Białowieża, or lowland European bison, was kept alive in captivity, and has since been reintroduced into several countries in Europe. Like the extinct wood bison of Eastern North America, the European bison is forest-dwelling.

A European bison reintroduction program is also taking place in Spain, in the states of Castile and Leon.

From the MongaBay article:

On a path flanked by thick woods (in Eastern Poland), I first spied our quarry. When she appeared, far away between the long verticals of bare trees, I could hardly believe she was there. She was a ghost, a specter haunting this winter forest. Her horns were prettily curved, her face slender, her whole 400 kilogram (880 pound) mass framed by the trees. 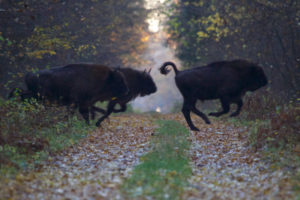 She eyed us with that wariness only prey species have, a super-abundance of caution, and if she had run we would have easily lost her amidst the forest. But she didn’t flee. Instead she stood still, puffs of breath emanating from her nose, for a few minutes. It’s a moment I will never forget: a continent’s megafauna in the flesh.

“It is as important to Europe as the American bison for America, the Komodo dragon for Oceania, the polar bear for the Arctic, the gorilla for Africa or the giant panda and tigers for Asia,” said Lukasz Mazurek, a naturalist and founder of Wild Poland, a wildlife tourism company in the Białowieża region. “Don’t get me wrong, I know there are other species even more endangered than the European bison… But would our world be the same without them?”