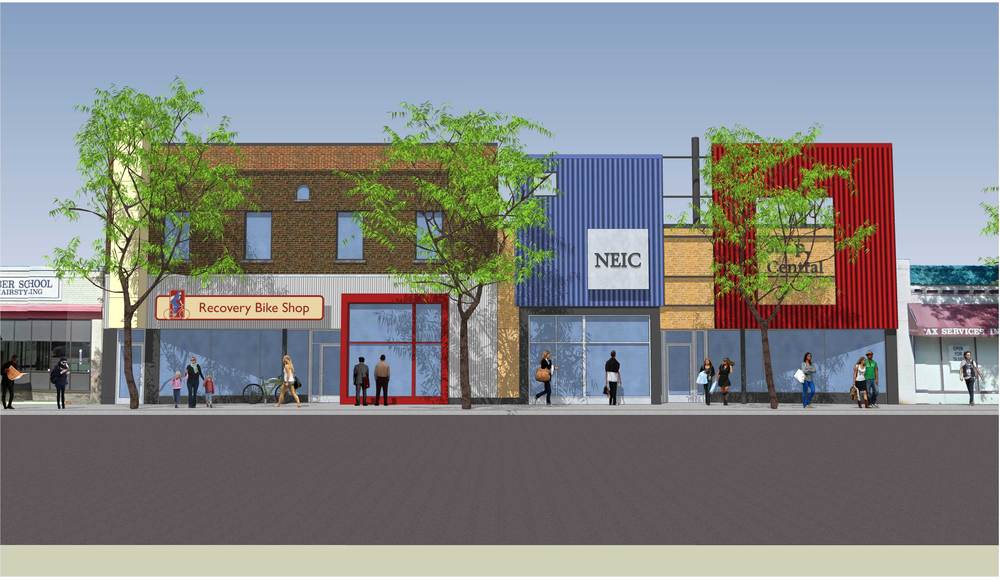 The NorthEast Investment Cooperative (NEIC) formed in 2012, by a small group of community members who were tired of looking at poorly used property in their neighborhood and waiting for traditional developers to fix it. So they decided to do something about it. They envisioned a way for community members to become owners and investors in a real estate development cooperative that would buy and rehab properties in their community.

In November of 2011, NEIC was incorporated as a cooperative. The year ended with a group of 39 founding members willing to go out on a limb to change their community.

Many property owners, both residential and commercial, had long fled the area, Schirber says, and they were just milking whatever they could from what they had without reinvesting in the community.

In the spring of 2012, NEIC was approached by Recovery Bike Shop about potentially partnering on a renovation project on Central Avenue. At the same time, a vacant and former hardware store and furniture store came on the market near the corner of Central Avenue and Lowry Avenue. By July of 2012 NEIC was actively pursuing the property at 2504/2506 Central Avenue.

A series of community conversations eventually led to pooling their money and acquiring their first property as a group — a former discount mattress warehouse along Central Avenue, which used to be a main drag through the area. The property now features a bike repair shop, collectively owned craft beer brewery and a bakery.

“When we started the investment cooperative, it was about let’s rejuvenate Northeast, and five years later it’s a little different scenario,” says Loren Schirber.

NEIC has been outbid on a few properties over the last few years.