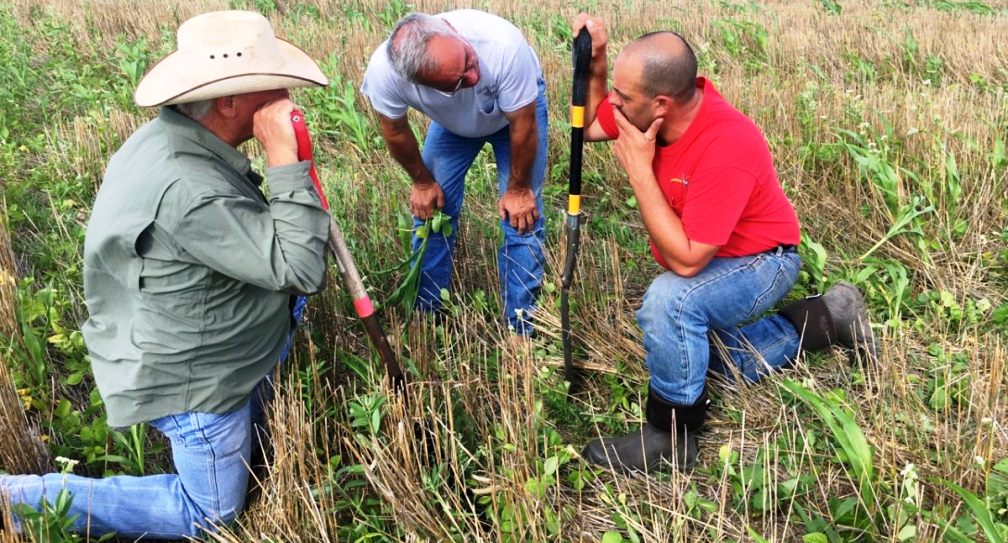 At the annual No-till on the Plains conference in Wichita, Kansas, Oklahoma farmer Jimmy Emmons declares himself a recovering tillage addict. Then he got down to business detailing the way he and his wife Ginger have re-built the soil on their 2,000-acre, third-generation Oklahoma farm.

A high point of his presentation came when the 50-something farmer—who now raises cattle and grows alfalfa, wheat, and canola along with myriad cover crops—described a deep trench he’d dug in one of his fields for the purposes of showing some out of town visitors a subterranean cross-section of his soil. A

After it rained, Emmons walked down into the trench with his camera phone, and traced the way water had infiltrated the soil. Along the way, the Emmons on stage and the Emmons behind the camera became a kind of chorus of enthusiasm, pointing out earthworm activity, a root that had grown over two-and-a-half feet down, and the layer of dark, carbon-rich soil.

“It was just amazing,” said Emmons in an energetic southern drawl. The water had seeped down over five feet. And the other farmers in the room—a collection of livestock, grain and legume producers mainly from Oklahoma, Kansas, Nebraska, and the Dakotas, as well as several Canadian provinces who had gathered for the 22nd annual No-till on the Plains conference—nodded their heads in a collective amen.

As the world begins to zero in on the need to bring this soil back to life—as a solution to drought, nitrogen pollution, climate change, and more—farmers like Emmons and others practicing no-till in the middle of the country could play a key role. As they reshape their operations with a focus on things like earthworms and water filtration, and practice a suite of other approaches that fit loosely under the umbrella of “regenerative agriculture,” these farmers are stepping out of the ag mainstream.

And while most conventional no-till farmers see organic agriculture as inherently disruptive to the soil, they also have a great deal in common with many of the smaller-scale farmers that are popular with today’s coastal consumers.

These two groups of farmers don’t use the same language to describe what they’re doing (you’re unlikely to hear words like “sustainable” or “climate change” among the no-till set, for instance), but it’s clear that both groups are motivated by the opportunity to be responsible stewards of the land while exploring creative solutions to the status quo.

And many no-till farmers are also just as skeptical as their organic counterparts are of the large seed and fertilizer companies they see as running their neighbors’ lives (and controlling their finances). For instance, it’s common practice among non-organic no-till farmers to use large amounts of Monsanto’s Roundup® (glyphosate) to control weeds.

So, just because someone isn’t wasting fuel and damaging their topsoil by tilling doesn’t mean that they are necessarily practicing regenerative agriculture.

On the Great Plains of North America, topsoil depth has gone from 6 feet to an inch or two, thanks to tilling. So, ending this destructive, wasteful practice is a step in the right direction. But a prosperous, resilient future for all won’t be built on simply reducing the damage we do: we need to undo previous damage, and that mean regenerating topsoil quantity and quality. Regenerative agriculture is one of the key foundations of a global Restoration Economy.

No-till on the Plains, Inc. is a 501(c)(3) non-profit educational organization providing information for producers to adopt high-quality continuous no-till systems, and to further develop those systems. While adopting high-quality continuous no-tillage and utilizing the best agronomic practices has the potential to greatly improve producers efficiency and profitability, many other benefits accrue to society, such as greatly reduced soil erosion of cropland, less sedimentation of rivers, lakes, and streams along with improved wildlife habitat, all while sequestering atmospheric carbon dioxide in soil organic matter.

Photo of no-till farmers courtesy of No-till on the Plains, Inc.