The federal Clean Air Act and associated environmental regulations have driven steep declines in air pollution emissions over the past several decades, even as U.S. manufacturers increased production, a study by two University of California, Berkeley, economists has shown.

The study, forthcoming in the American Economic Review, found that polluting emissions from U.S. manufacturing fell by 60 percent between 1990 and 2008—a period in which manufacturing output grew significantly—primarily because manufacturers adopted cleaner production methods in tandem with increasingly strict environmental regulation. 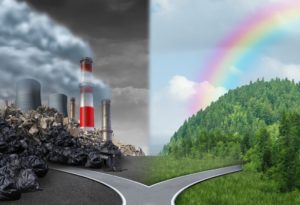 “In the 1960s and 1970s, people worried that Los Angeles, New York and other U.S. cities would have unbearable air pollution levels by the end of the 20th century,” said Joseph Shapiro, an associate professor of agricultural and resource economics who co-authored the study with Reed Walker, an associate professor in the Haas School of Business and Department of Economics.

“Instead, air pollution levels have plummeted, and the evidence shows that environmental regulation and the associated cleanup of production processes have played important roles in those steep declines,” he continued.

Shapiro and Walker analyzed newly available data on over 1,400 different products produced by U.S. plants between 1990 and 2008. They combined this with plant-level pollution emissions data over the same period. The authors then categorized reductions in overall emissions into those that can be explained by changes in manufacturing output, changes in the types of goods produced or changes in production technologies.

The researchers found that most of the decreases in emissions of important pollutants from manufacturing—such as nitrogen oxides, sulfur dioxide and carbon monoxide—came from changes in production technologies.

“People often assume that manufacturing production pollutes less today because manufacturing output has declined, when in fact output was 30 percent greater in 2008 than in 1990,” said Walker. “Others argue that manufacturing has shifted towards cleaner, high-tech products or that the manufacturing of ‘dirty’ products like steel has moved to China, Mexico or other foreign countries. Our analysis showed that changes in the product-mix of U.S. manufacturing do not explain much of the reduction in emissions. Instead, manufacturers are producing the same types of goods, but they’ve taken significant steps to clean up their production processes.”

The researchers sought to identify the key driver of the change in production technology. They quantified the importance of reductions in tariffs and other trade costs, improved productivity and environmental regulation in explaining decreases in air pollution emissions. Then they showed that the stringency of environmental regulation for manufacturing firms nearly doubled between 1990 and 2008. The researchers demonstrate that this increase in regulatory stringency, rather than improvements in manufacturing productivity or trade exposure, accounted for most of the decreases in pollution emissions.

The study was funded in part by grants from the National Science Foundation and the U.S. Department of Energy. Shapiro conducted much of the research in his former position at Yale University.

All images via Adobe Stock.

Read “Why is Pollution from U.S. Manufacturing Declining? The Roles of Environmental Regulation, Productivity, and Trade” (AER abstract, PDF).