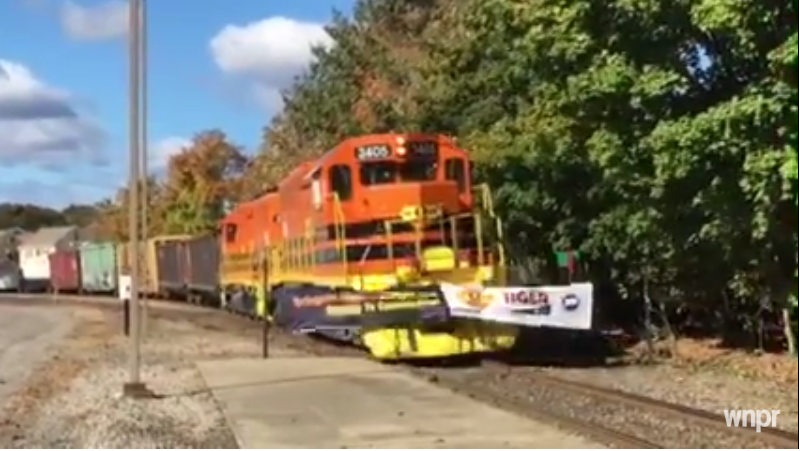 A new railroad investment is about to get underway in eastern Connecticut. Its backers hope will be a boost for the economy right along the tracks and into greater New England.

The celebration, held in Willimantic, was two years in the making, and is the result of the state winning an $8 million federal TIGER grant to revitalize this stretch of freight rail.

Approximately fifty people joined together along the NECR main line to recognize the importance of this project for the economy of Connecticut. Attendees were a diverse mix of local industry managers and governmental officials, local and regional economic development officials, and representatives from the Federal Railroad Administration. After several speeches by attending officials, the group watched as a NECR freight train broke through a ceremonial banner across the main line.

“The federal TIGER funding I helped secure proved critical in the effort to leverage matching funds from private industry in order to get this project underway,” said Courtney. “After the rail line upgrades are completed, it will greatly expand the freight capacity of the eastern Connecticut rail network. That is an enormous increase from the current capacity and will allow the Port of New London to greatly expand the amount of freight cargo that can be shipped in and sent out by rail across the region. This development is bound to expand industry and create new jobs across eastern Connecticut as shipping expands. I want to thank the U.S. Department of Transportation, ConnDOT and the New England Central Rail for their continuing commitment to getting this done.“

“This substantial TIGER investment will bring the New England Central Railroad into the 21st century— creating new jobs and increasing shipping capacities from Vermont to New London,” said Blumenthal. “These critical upgrades will bring enormous benefits to local economies in Connecticut, all while reducing transportation costs, increasing rail safety, and allowing companies to grow. I will continue to fight for federal resources that will help support and improve Connecticut’s transportation system.”

“Today is a great day for Eastern Connecticut. Our previous freight rail system was ineffective and cumbersome,” said Murphy. “This public-private funding partnership made possible by the TIGER grant I was proud to help secure will make necessary upgrades to our rail infrastructure, opening doors to new economic growth—and most importantly, new jobs.”

New England Central Railroad President David Ebbrecht said: “The TIGER VII grant will make a significant improvement in freight transportation in Connecticut. It will make movement of goods to and from the Port of New London and the numerous communities along the line more efficient and help Connecticut industry better compete in national and world markets. The New England Central Railroad greatly appreciates all of the support provided for this grant by elected federal and state officials led by Congressman Joe Courtney, Connecticut DOT under the direction of Commissioner James Redeker, U.S. Department of Transportation and all of the communities and customers served by the railroad in the state.”

The federal TIGER VII infrastructure grant was awarded to Connecticut Department of Transportation in 2014 to upgrade the NECR main line through Connecticut to handle modern 286,000 lb. freight car shipments. The project will upgrade the existing line with 7.5 miles of new continuous welded rail, 15,000 new crossties, and 15,000 tons of ballast. Once complete, the current 263,000 lb. per rail car weight limit of the NECR main line in Connecticut will be increased to 286,000 lbs. This will provide Connecticut industry dependent on this rail line much better shipping efficiencies, allowing them to fully utilize the rail freight network throughout North America.

Since award of the grant, the necessary environmental reviews, engineering studies, cost budgets and project agreements have been developed and accepted. The estimated cost of this work is approximately $12.8 million, with a NECR match of $4.6 million and with $8.2 million provided by the federal TIGER program. ConnDOT was the submitting agency for the grant.

NECR is a critical north–south rail freight corridor in Connecticut, running between the deep water port of New London to the Vermont-Canadian border. In addition to New London, the line serves the Connecticut communities of Franklin, Norwich, Stafford, Willimantic, and Stafford Springs.

The hope is that bringing this rail line up to modern standards should attract industries to locate in this part of the state.

And in the future, freight may not even be the last word for the New England Central Railroad. “I’ve ridden this line,” said Senator Richard Blumenthal. “It is an exquisitely beautiful line, and I can see a day when it will be not only a cultural corridor, because it connects universities and schools, but also a tourist attraction.”

“This is one of the greatest things to happen for New London in decades,” said New London Mayor Michael Passero. “An investment in this rail line that goes directly to the state pier is going to allow New London to tap into one of its greatest unused assets.”