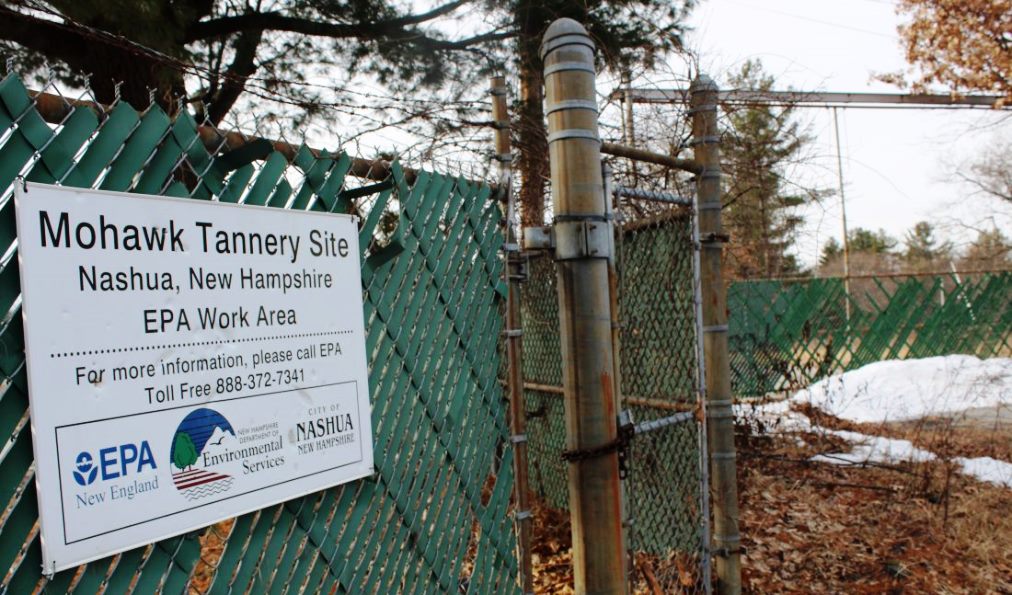 On February 12, 2021 in Nashua, New Hampshire, the U.S. Environmental Protection Agency (EPA) reached an agreement with a local developer, Blaylock Holdings, LLC, that will ensure the successful remediation and beneficial reuse of the Granite State Leathers Superfund Site in Nashua; also known as Mohawk Tannery.

The cleanup and redevelopment projects are being funded through the combined effort of EPA, the City of Nashua, and Blaylock. This agreement is unique in that the cleanup costs are being shared with the developer, by way of partial reimbursement of the developer’s costs, who will perform all cleanup activities at the proposed National Priorities List (NPL) site.

“This unique agreement ensures that the cleanup plan for the site will protect human health and the environment and will also result in the redevelopment of the site,” said EPA New England Acting Regional Administrator Deb Szaro. “This is a great example of the ways EPA continues to find innovative and cost-saving approaches to clean up Superfund sites, revive them for future use, and be good stewards of taxpayer dollars.”

The agreement was developed in coordination with the City of Nashua and the New Hampshire Department of Environmental Services (NHDES). The cleanup is designed to address hazardous substances present in soils, sludges, and contaminated waste originating from the site and, once completed, will eliminate the threat posed to human health and the environment. Overall, the cost sharing arrangement will save the taxpayer an estimated $8 million in project costs, as compared to EPA performing the cleanup in its entirety.

An initial cleanup plan for the site was signed in 2019 after a comment period. In December 2020, EPA finalized an addendum to include the adjacent Fimbel Landfill as part of the overall cleanup plan and detailed the funding and technical basis of the project.

Once the cleanup is complete, Blaylock plans to redevelop the area into mixed-use commercial space and residential units, providing significant economic opportunity and much-needed residential housing and bringing an otherwise abandoned property back into productive use.

“The environmental cleanup of the former Mohawk Tannery Site on the Nashua riverfront will greatly benefit our city,” said Nashua Mayor Jim Donchess.

“Once completed, this site will serve as a lasting symbol of positive change in our community. Thank you to all involved on the state, local, and federal level for your hard work. Your efforts will culminate in turning what has long been a safety and health hazard into a place that is both safe and prosperous,” he added.

The former facility produced tanned hides for leather between 1924 and 1984. The site was proposed for the National Priorities List (NPL) in 2000, but never listed, on the basis of past disposal practices which included the direct discharge of wastewater containing hazardous substances such as chromium, zinc, and phenol into the Nashua River and the disposal of sludge containing hazardous substances such as chromium, pentachlorophenol, phenol, and 2,4,6-trichlorophenol into a number of unlined disposal areas at the site.

Cleanup work at the site will include excavation of hazardous tannery waste, landfill material and asbestos containing material, disposal of waste in a newly constructed waste containment cell, and general property restoration. The containment cell will utilize the most advanced materials and technology, including an impermeable cap and vertical barrier designed to meet EPA requirements under the Comprehensive Environmental Response, Compensation, and Liability Act (CERCLA), the National Oil and Hazardous Substances Pollution Contingency Plan (NCP), and the overall cleanup plan.

“NHDES applauds this important agreement as a great example of federal, state, and local governments working together with a private developer to achieve brownfields revitalization. The agreement uses public resources and incentives to leverage significant private investment in the challenging cleanup and redevelopment of a legacy site located in New Hampshire’s Gate City,” said Bob Scott, Commissioner of the New Hampshire Department of Environmental Services.

The cleanup work is expected to take approximately 18 months. EPA will continue to work closely with state and local officials as the project progresses and plans to hold a virtual public informational meeting after the public comment period ends and before work begins on the site.

EPA is encouraging public input on the agreement during the public comment period, which began on February 12, 2021 and will conclude on March 13, 2021.