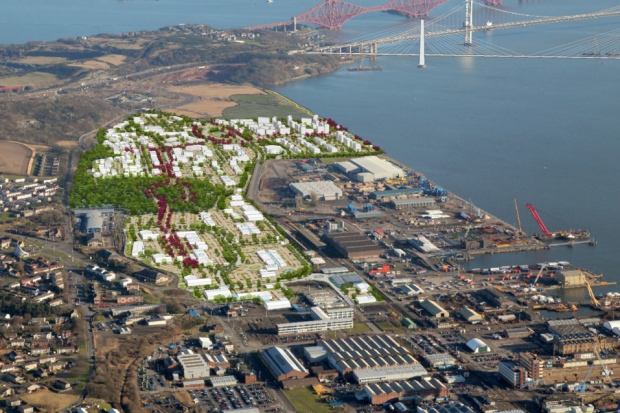 Fife, Scotland‘s City Council has signalled its backing for one of Scotland’s largest urban regeneration schemes which it is estimated would support up to 3,500 new jobs.

Councillors on the executive committee have decided to support in principal the Rosyth Waterfront redevelopment in Fife which would cover 120 acres and include five zones in the shadow of the Forth bridges.

The council described it as a “major milestone” in the progress of the £500 million project which will incorporate a business and employment park, the Rosyth Gateway commercial zone, a supermarket, leisure centre, restaurants, large stores, shops, cafes, bars, galleries, housing and waterfront gardens.

Development partnership Scarborough Muir Group Ltd. said the proposals, will “capitalise on the potential of the area after the designation of the Forth Bridge as an UNESCO World Heritage Site” and, “complement the waterfront’s role as a European gateway for trade, commerce, and tourism”.

Mike Shirkie, Labour councillor for the Rosyth ward, said: “Mixed use development of Rosyth Waterfront will provide a fantastic ‘Gateway’ for tourists, create thousands of much needed jobs during the construction and operational phases and finally give access to our people to the Waterfront for the first time in over 100 years.”