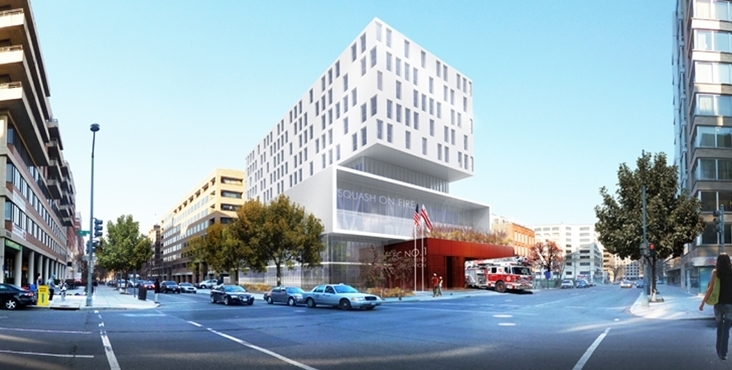 The stretch of Washington, DC’s M Street between 21st Street and Rock Creek Park—otherwise known as the West End—boasts enough highbrow hotels and restaurants that the neighborhood seems a perfect fit for a squash club. 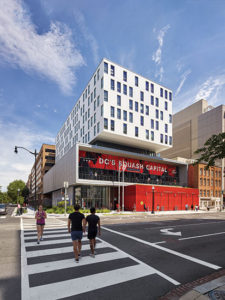 What’s surprising is that the club, as the middle part of a three-tiered cake designed by Mexico City-based TEN Arquitectos, is layered between a fire station and six floors of affordable housing.

The project, called West End Square 50 in reference to its lot’s appellation within the planning department, replaces an aging two-story fire station with a brand-new one.

But it also injects palpable activity into an inward-facing neighborhood as part of a public-private partnership between the city and developer Eastbanc while making the most of a previously underutilized site.

Eastbanc was selected by the DC Office of the Deputy Mayor for Planning and Economic Development to develop two parcels, Squares 37 and 50, owned by the City.

WDG Architecture is the Executive Architect and Architect of Record for both parcels. Square 50 will be a mixed use building that includes a new West End fire station, a commercial space intended for competitive squash tournaments, and 52 affordable dwelling units. 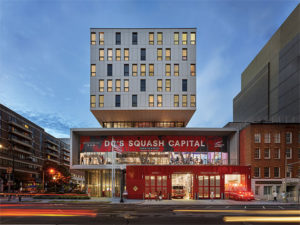 The West End fire station is proudly pronounced as the base of the building on M Street with a perforated corrugated metal-clad red box of the Apparatus Bay. The use of materials of metal, glass and masonry convey the agility of the 21st century DCFEMS to be effective in its ultimate purpose; the “prompt response for the protection of life and property.”

Above the Engine Company is a rectangular volume encompassing a two-story Squash Club that recedes on M street and cantilevers on 23rd street. By pulling back the mass of the squash club on M Street, a public terrace is created providing a framed view of M street and enlivening the existing street activity. The project incorporates multiple sustainable design features and will seek LEED-Gold certification.

The project received approval from the Commission of Fine Arts. WDG is executive architect in collaboration with design architect Ten Arquitectos.

Eastbanc won the bid to redevelop this lot and nearby Square 37 in large part due to its solution for the replacement of municipal facilities and inclusion of affordable housing.

The double-height street-level fire station is capped with a squash facility featuring a bar and restaurant. And then there are the 55 units of affordable housing in the six stories above the squash club.