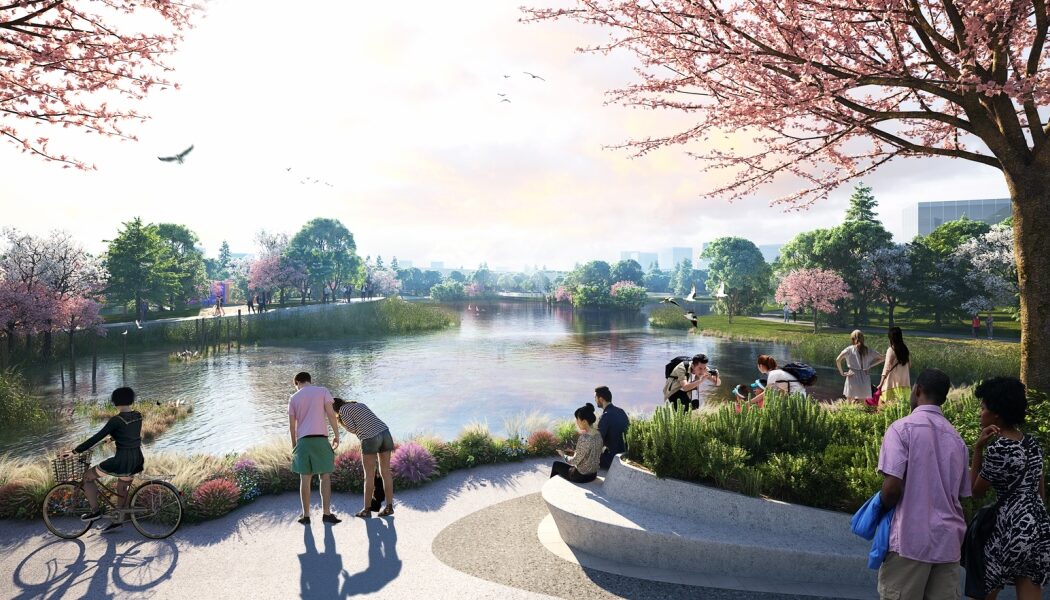 Rarely does a city build a park that sets a new standard for ecological restoration and sparks a paradigm shift for the design, programming, and funding of future public parks across the world. But that’s what Athens, Greece is doing.

We’ve reported on this property in the past here in REVITALIZATION. The original story was how a failed airport was going to be repurposed and renewed as an Olympics site. The Olympics did happen, but the event was a financial disaster for Greece, and the planners did a terrible job of creating an lasting new functionality for the site. 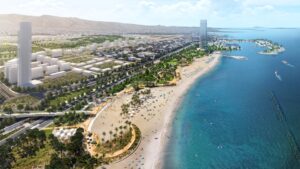 The Ellinikon Metropolitan Park is doing just that—striving to become the social heart of Athens while also claiming the title as Europe’s largest urban coastal park.

The site contains traces of multiple histories—prehistoric settlements, once thriving agriculture, an obsolete international airport, and a dilapidated collection of former Olympic venues.

After nearly two decades of work to establish a funding and governance mechanism, the center of Europe’s largest urban redevelopment project is the 263 hectare (650 acre) park, which will be gifted back to the citizens of Athens with a private entity responsible for operating and maintaining the park for 99 years. 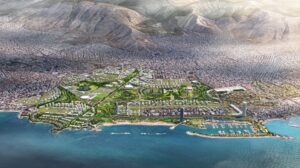 The park’s design centers on ecological restoration, material reuse, and cultural programming that honors the site’s layered histories while introducing novel experiences in a city that does not have a public park at this scale.

The Ellinikon Metropolitan Park is poised to become one of the most significant public spaces in Athens—an ambitious goal for a city celebrated for its iconic architecture and urban design. This park, however, is special.

It is an opportunity to embrace an abundant cultural heritage while establishing a 21st century ethos and identity for Athens that will resonate for the next 1000 years. It will transform obsolete infrastructure into a resilient and performative landscape to create an oasis of biodiversity, and it will be an accessible landscape where all are welcome, providing spaces for solace, celebration, and civic expression.

LEARNING FROM THE PAST AND LOOKING TO THE FUTURE 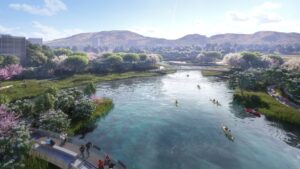 The decommissioning of the original Athens International Airport in 2001 led to two decades of work to establish a funding and governance mechanism that would transform the abandoned space into Europe’s largest coastal park.

The 263 hectare (650 acre) park is bigger than the entire principality of Monaco, and represents a palimpsest of Athenian landscapes including prehistoric coastal settlements, productive agricultural fields, a 20th century airport, and a 21st century Olympic venue. Most importantly, the continuity of these uses illustrates how the site has always been an inclusive, publicly accessible space that is engrained in the collective memory of many Athenians.

Greek society, however, is undergoing an unprecedented shift in demographics, enhanced by the economic crisis of 2008-2010 which accelerated brain drain and shifted entrenched societal standards. Historically, Athenians returned to family farms in the countryside on weekends, and core to the Athenian identity was a relationship to the wider Greek landscape.

But as the Greek diaspora grew abroad, most contemporary Athenians no longer had access to a rural ancestral home, displacing a traditional cultural relationship with nature and resulting in a growing disconnect between urban residents and the landscape.

Similarly, the majority of open spaces in Athens today are either passive landscapes adjacent to ancient ruins, or hyper-urban plazas and streetscapes.

Working within this context, a foundational goal for the park is to engage Athenian society in a 21st century landscape that reinstates that relationship, enhances understanding and appreciation of natural processes, and demonstrates Greek commitment to climate positive design.

ECOLOGICAL RESTORATION AS A DRIVER OF DESIGN 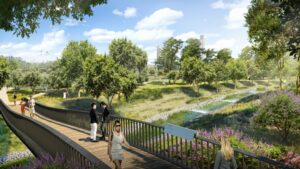 While the aviation and Olympic history provides an evident underlay for formal moves, natural systems offer opportunities to diverge from the rigid forms of the existing infrastructure. This duality has a direct translation to form giving. Curvilinear and organic visual languages highlight restored ecosystems and topography, and linear expressions reveal the site’s legacy of airport runways, its 2004 hosting of the Olympic Games, and its agricultural heritage.

Most notably, the park presents an opportunity to restore vital habitat and ecosystem functions, balancing cultural expression with robust renaturalization.

With the site’s lack of maintenance for nearly two decades, a novel ecosystem has emerged from species that were planted as ornament and species that have colonized the site naturally.

While it is not possible to restore the landscape to a pre-anthropic ecological assemblage, rigorous analysis identified foundational plant species that provide ecological benefits including habitat structure and food provisioning for local wildlife. 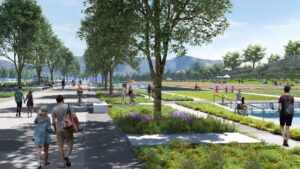 The plan calls for the protection and reuse of the existing seedbank of ruderal grasses and geophyte species indicative of the existing site’s novel ecosystem, while 31,287 new trees representing 86 species were selected for their ecosystem services and adaptability to the site’s distinctive soil profile.

The plant list, which includes trees, shrubs, geophytes, and herbaceous material, was carefully considered based on 1) native status; 2) adaptability to local and regional climatic conditions from historical, phytogeographical, cultural, and ecological evidence; and 3) current distribution range in the Mediterranean basin and known occurrence on the Attica peninsula.

Plant materials are sourced entirely within Greece, which increases biodiversity and establishes a regenerative landscape strategy. Water scarcity is also a concern, requiring strategies to enhance water management and conservation. 100% of the irrigation water demand for the park is fulfilled through reclaimed water.

Additionally, a 1.5 hectare (3.7 acre) lake repurposed from the former canoe/kayak Olympic venue collects and stores stormwater during the wet season, with reclaimed water offsetting evaporation during the dry season. 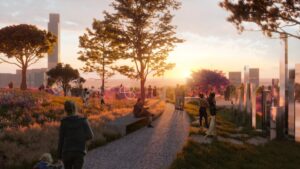 The lake includes a recirculating flow-through wetland and serves as an emergency reservoir for drought and fire control. The combination of the constructed wetland, rain gardens, and bioswale network will make this the largest green infrastructure installation in Greece. The design also considered plant phenology, ensuring that landscapes are continuously showcasing floral interest even in the depths of summer and winter when Athenian landscapes are typically dormant.

Plants that are specifically adapted to Ellinikon’s highly alkaline soils and share similar irrigation and maintenance characteristics were grouped together, and tree species selection and placement maximizes shade to provide microclimate benefit.

Overall, 70% of the park is designed as a demonstration of Greek landscape restoration, utilizing natural areas management techniques. The remaining 30% is focused around high human contact areas and is strategically subdivided into zones that require monthly or weekly care.

With over 3.3 million plants, the scale of the park presents obvious challenges with procurement. In addition to committing to a native palette, the design team collaborated with Greek nurseries to create native seed mixes, increasing genetic diversity of plantings at important successional stages for both local flora and wildlife, and establishing a new standard for the industry to lead Greece towards a more sustainable nursery trade. 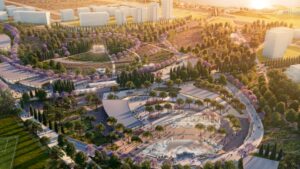 The landscape of Athens is one that tells the ages. The scale of investment in the Ellinikon Metropolitan Park and Coastal Front will lay a foundation for generations. Design decisions about materiality and planting were selected to withstand the test of time and remain relevant. Priorities included the use of durable, reusable, long life-cycle materials that would reduce the overall carbon footprint of the park.

With an abundance of leftover materials from the site’s past lives, what would typically be discarded was repurposed and celebrated. Using the Carbon Conscience and Pathfinder tools, design decisions were based on increasing sequestered and stored carbon and reducing embodied carbon.

With this in mind, 28,720 m2 (309,140 sq. ft.) of concrete from the existing airport runways and tarmac is reused playfully throughout the park to subtly tell the story of the site’s past, transforming the banal into something beautiful.

With its glimmering marble aggregate and no rebar, the once unnoticed is honored in signature fountains, massive retaining walls, custom furnishings, and various hardscapes. 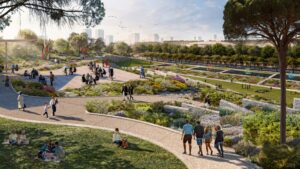 Material vernaculars sourced from beyond the site were prioritized based on local availability and craftsmanship.

Dionyssos marble, quarried in Attica, has the same chemical composition and texture as the Pentelic marble from antiquity, and is used in high fit and finish spaces. Kavala and Karystos slate is sourced in Greece and is dimensionally stable, making it suitable for slabs and thick pavers.

And, due to the sophisticated local sourcing and fabrication expertise for a range of metal products, metal elements were selected for durable, long lasting, iconic and high touch elements such as handrails, fences, and shade structures.

With the site’s highly corrosive marine environment, priority was given to metals that develop a superficial patina regardless of coating including aluminum, bronze, weathering steel, and brass. 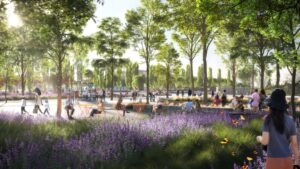 Through an intentional combination of strategies, the Ellinikon Metropolitan Park will reach carbon neutrality within 35 years—a remarkable achievement for a project of this scale. The park is a landscape that embodies regenerative design, and will have a significant impact on Athens from a climate perspective.

Leveraging Sasaki’s Carbon Conscience App, Climate Positive Design’s Pathfinder tool, and Atelier Ten‘s carbon analysis, the project will cut emissions by 45 percent in comparison to a traditional design approach. This means the project will become carbon positive, storing more carbon than it emitted, and then continue to function as a carbon sink far into the future.

Through all aspects of the design from soil management, material reuse, water systems, food and energy production, and habitat creation, the park is a working landscape. It is heroic in scale and ambition, which translates into a responsibility to reinforce the Greek relationship with landscape and reignite this ethos in a 21st century context—centering ecological restoration, climate responsiveness, carbon neutrality, and equitable access for all Athenians.

Most importantly, it is a highly visible civic platform that embodies a commitment by the Greek people to provide a regenerative model for a landscape that symbiotically benefits people and the planet.