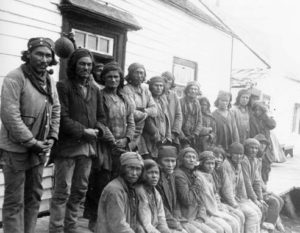 This anonymous photo shows Innu traders gathered outside the Hudson’s Bay Company post in Davis Inlet, Labrador in August of 1903.

The Innu are the indigenous inhabitants of an area in Canada they refer to as Nitassinan, which comprises most of the northeastern portion of the present-day province of Quebec and some eastern portions of Labrador. Their ancestors were known to have lived on these lands for several thousand years as hunter-gatherers. Innu is the word that both the Naskapi and Montagnais indigenous peoples call themselves. Innu means “the people” in both their languages.

Restoring coastal habitats that are important for the Innu communities of the North Shore is a strategic initiative that benefits the communities involved, because in addition to creating regional synergy, the project will contribute to the maintenance of traditional activities and the strengthening of the capacity of several stakeholders to restore key fish habitats.

“The federal government is committed to protecting Canada’s coastline – that’s why we’re implementing the Oceans Protection Plan, which allows us to work together to make our oceans and coasts safer, cleaner and healthier. The $75 million Coastal Restoration Fund provides an opportunity to address threats to our ocean and coastal areas. Our work with AMIK will ensure healthy and thriving coastal habitats for future generations in the Innu communities of the Estuary and Gulf of St. Lawrence,” declared Wilkinson.

The sites that will be restored are located along the Estuary and Gulf of St. Lawrence. The coastal habitats targeted by the project are eelgrass beds, salt marshes, shellfish beds and habitats frequented by forage species.

The project will reduce threats to the habitats of several fish species and maintain or restore certain traditional and economic activities related to the marine environment of Innu communities.

This project, led by AMIK, will help seven member communities increase their capacity towards conservation and restoration of coastal habitats. Over the past two years, the Government of Canada has invested more than $4.5 million in nine projects in Quebec under the Coastal Restoration Fund.

“This contribution, which AMIK received through the Coastal Restoration Fund, is a first step in identifying and restoring coastal habitats near Innu communities on the North Shore. AMIK is pleased to work with the members of each Innu community for the well-being of nature,” said Léo St-Onge, the Director General of AMIK.

The objective of the first phase of the project is to identify and prioritize restoration sites that will benefit Innu communities that are members of AMIK. In the second phase, the characterization and planning of the interventions will make it possible to implement restoration projects on the selected sites and ensure the sustainability of the developments.

In May 2017, the Government of Canada announced the $75 million Coastal Restoration Fund, under the Oceans Protection Plan, to help rehabilitate some of our most vulnerable coastlines and protect marine life and ecosystems. The Coastal Restoration Fund supports projects that contribute to healthier habitats for fish on all of Canada’s coasts with preference given to projects that are multiyear and involve a broad number of partners, including Indigenous groups.