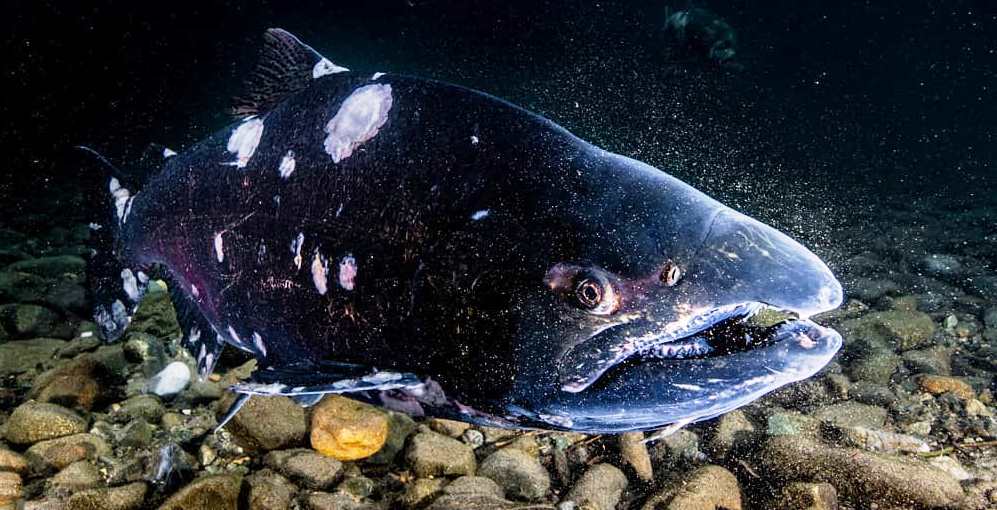 The Sarita River Watershed on Vancouver Island in British Columbia, Canada is the heart of Huu-ay-aht First Nations, and is the most important of the 35 streams and rivers in the nations’ traditional territory.

Huu-ay-aht’s ḥahuułi includes Barkley Sound, the Alberni Inlet, and the Sarita River watershed, which extends over approximately 190 square kilometers. For generations, the Sarita has served as a source of food, transportation, and cultural value to Huu-ay-aht people.

Surrounded by giant cedar and hemlock, the Sarita River was one of the most productive salmon rivers in Barkley Sound and, since time immemorial, the Sarita and surrounding watersheds have sustained Huu-ay-aht. However, after decades of commercial fishing and extensive, badly-practiced forestry, the rivers and watershed in the ḥahuułi have been severely degraded.

By 1997, 62 per cent of the Sarita watershed had been logged, including 97 per cent of the flood plain. As a result, the river is twice as wide as it once was in the lower river sections.

“We have always taken care of the resources in our ḥahuułi, especially the Sarita River because it is the heart of our people,” explains Tayii Ḥaw̓ił ƛiišin (Derek Peters). “We can’t forget about its importance just because we don’t live along its shores anymore.”

Huu-ay-aht hired LGL Limited in 2017 to develop a strategy for a Sarita and Pachena Watershed Renewal Program. The goal for the renewal program is to revitalize the Sarita and Pachena watershed ecosystems and, eventually, other watersheds within the ḥahuułi. This may take generations.

“When we logged years ago, a lot of the side channels were affected and, with that, a lot of our salmon habitat was destroyed,” explains Huu-ay-aht Chief Councillor Robert J. Dennis Sr. “Now if you go around touring our land you will see our own people out working on these streams, restoring and renewing that habitat so that our salmon come back – so that they have a place in our rivers.”

He says without the help of Steelhead LNG the Nation would not be able to fund this project, which entered its second year in 2018. Through the co-management of the Kwispaa LNG project, Huu-ay-aht has resources for renewal in its ḥahuułi. He said, in the past, the nation received grant money for some of this work, but much more is necessary.

“We are really kicking in a big effort over the next few years, because I’ve been told we have to do $150-million worth of renewal to bring our salmon back,” Dennis says. “This is an important project for our Nation. It is getting our people working, and it is bringing back our salmon, which is so important to our way of life.”

ƛiišin stresses the importance of using the tools the ancestors taught to guide the Nation in this new world. “We have to remember our principles and that what we take from our land must be returned from the land,” he says. “This is something we are doing with our own money and by our people.”

Huu-ay-aht First Nations is a self-governing Nation, whose lands are located in the Barkley Sound at the entrance to the Alberni Inlet.

Huu-ay-aht First Nations is a member of the Nuu-chah-nulth Tribal Council and one of the five First Nations signatories to the Maa-nulth Final Agreement, the first modern-day treaty to be concluded on Vancouver Island, which came into effect April 1st, 2011.

Of the approximately 750 Huu-ay-aht citizens, 15 per cent reside around the village of Anacla, the Nation’s principal community close to Bamfield. The remaining 85 per cent live in Port Alberni, the Vancouver area, across Vancouver Island and beyond. The Huu-ay-aht have full ownership and jurisdiction over more than 8,200 hectares of land within their territories and continue to have rights throughout their ḥahuułi (ha-houlthee – traditional territories).

Huu-ay-aht is governed by a modern electoral system that includes a Chief Councillor and five councillors. In addition to honouring its Modern Mind, it continues to respect its Ancient Spirit by involving their Ḥaw̓iiḥ (Hereditary) Council in all decision making.

With its history of extensive logging, the forest within Huu-ay-aht’s watersheds is mostly a mix of second-growth fir, spruce, hemlock, and cedar. Approximately two per cent is classified as old-growth. Historically, riparian habitats in the Sarita and Pachena watershed were dominated by large conifers that shaded and protected stream banks and provided a source of large woody debris. Early logging along the water courses within the Sarita watershed left little or no riparian habitat unaltered and also affected are the wetlands in the area.

The Sarita estuary is included in the renewal plans. Located in Numukamis Bay, this estuary system is one of the largest in Barkley Sound and is an important clam harvesting area for the nation. The estuary includes one of the two treaty-protected Huu-ay-aht inter-tidal bivalve harvest areas. Logging and road building has changed the path and structure of the estuary by concentrating the energy of the river to specific areas of the estuary instead of spreading it out across and into side channels. As a result, the productive capacity of the estuary for fish, shellfish, birds, mammals, and plants has decreased.

Another challenge the watershed faces is the damage created by landslides and erosion caused by logging and road building on steep slopes. This results in the deposition of sediment into streams. The infilling of deep pools, channelization, and the loss of spawning and rearing habitat has reduced the carrying capacity of chinook, coho, and chum salmon in the Pachena and Sarita watersheds.

The long-term goal of the renewal program is to reverse these negative impacts and revitalize the ecosystems. The nation is pursuing these goals using an ecosystem-based approach that recognizes the interconnections between community, land, water, and biota – a modern-day take on Hišuk ma c̕awak (everything is one and interconnected). To accomplish this, a steering committee and technical working group of diverse professionals was formed to oversee the work.

In the last year, the renewal program has enabled Huu-ay-aht to extend the life of stream habitat structures they built in the Pachena watershed in the early 2000s and to begin renewal of Sarita’s riparian habitats. A key focus is on understanding and enhancing chinook salmon in the Sarita River. Huu-ay-aht has been counting the number of juvenile chinook leaving the river and assessing how many are from natural river spawners versus the Nitinat River Hatchery. This information is critical for determining the appropriate strategy to further enhance Chinook salmon in the river.

The project has also been instrumental in helping citizens gain important work experience. In its first year, 10 Huu-ay-aht citizens and family members worked on renewal activities with LGL Ltd and Meridian Forest Services Ltd. The work continues in 2018 with a focus on renewal of riparian and fish habitat in the Pachena watershed, road deactivation, and wildlife habitat assessments. Most of the 10 citizens returned to the crew for another season.

Photo of chinook salmon in the Sarita River is by unknown photographer (via Instagram).