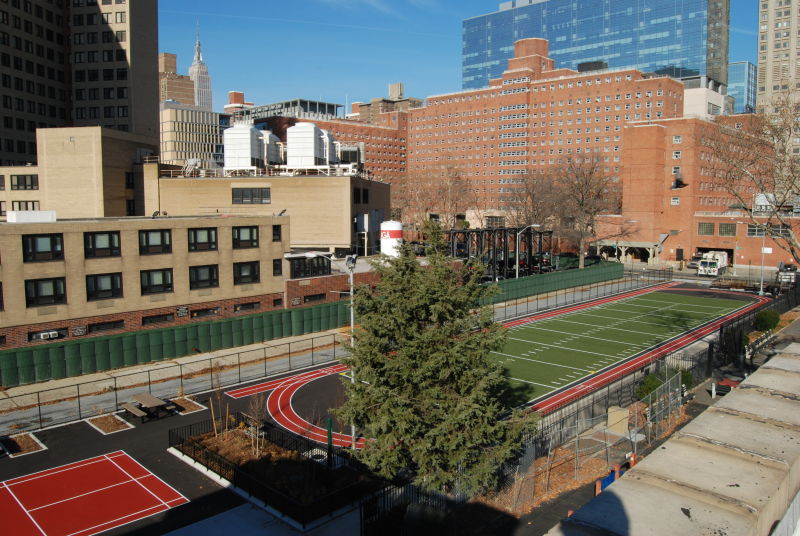 On July 18, 2022, New York City Mayor Eric Adams celebrated the completion of the first part of the East Side Coastal Resiliency (ESCR) Project, that represents a new class of resilient infrastructure for New York City.

“Climate change is here, and with it are hotter temperatures, heavier rainfall, and more dangerous flooding,” said Mayor Adams. “The East Side Coastal Resiliency project is more than infrastructure; it’s how we will protect our city from rising seas and stronger storms. This one project will create good jobs, put cutting edge technology and engineering into action, and, most importantly, protect more than 100,000 New York City residents from extreme weather. New York City is leading the way on climate, and we will continue to address the extreme weather threats that every neighborhood faces with the urgency it demands.” 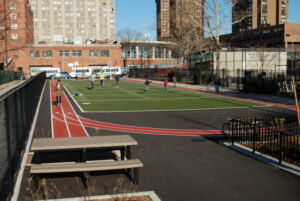 “Asser Levy Playground has undergone many changes in the last decade,” said Manhattan Community Board 6 Chair Kyle Athayde. “A good bit of the park space we enjoy today used to be a street, Asser Levy Place. The street was de-mapped and repurposed to expand the park footprint to what we see today. Just a few years later in 2020, work on the East Side Coastal Resiliency Project commenced, and along with it came the closure of Asser Levy Playground. Our community felt this closure quite acutely as the closure came during the second wave of the pandemic, before the release of vaccines and when spending time outdoors was one of the few safe activities our community had. Manhattan Community Board 6 is overjoyed to see Asser Levy Playground reopened once again. As a district that suffers from a shortage of open space, the reopening of this playground means that residents of Manhattan Community District 6 have badly needed open space once again available to us!” 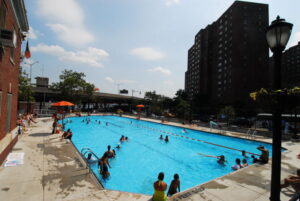 Asser Levy Playground is home to the northern end of the ESCR Project, a $1.45 billion project that will create a 2.4-mile flood barrier of berms, floodwalls, moveable gates and raised parkland that will protect 110,000 East Side residents — including 28,000 NYCHA residents — from future storms and tidal flooding. Of the $1.45 billion, $338 million of funding is being provided by the U.S. Department of Housing and Urban Development.

“DOT is proud to be part of the great team of city agencies contributing to the vitally important East Side Coastal Resiliency Project,” said DOT Commissioner Ydanis Rodriguez. “We are thrilled to see the Asser Levy Playground reopen and we are excited for the upcoming improvements along the waterfront, including a wider and safer East River Greenway for pedestrians and cyclists, as well as three new pedestrian bridges. We commend Mayor Adams and our sister agencies, who have already made such significant progress on this massive project.”

The entire span of the ESCR project — located within the Federal Emergency Management Agency’s (FEMA) 100-year floodplain — will incorporate 18 movable gates from Asser Levy Playground (located along Franklin Delano Roosevelt Drive from East 23rd Street to East 25th Street) down to Montgomery Street. The entire project is being installed in phases to ensure the community has access to recreational areas during construction. This project is a crucial part of the Adams administration’s work to ensure that New York City is better prepared to withstand the impacts of climate change.

“We’re incredibly happy to see this vision come to life,” said Amy Chester, managing director, Rebuild by Design. “This project has shown that adapting to climate change will be hard and will require tradeoffs. We can learn from the past and work together to ensure that we are creating climate infrastructure that enhances communities every day — and helps protect us when we are hit with devastating weather.”

Asser Levy Playground now features 320 feet of new floodwall, along with a new 79-foot-long, 45-ton sliding steel floodgate. The first protective flood gate — measuring 42 feet and weighing 16 tons — was installed as part of the flood wall near Stuyvesant Cove Park in February. Once ESCR is completed, the floodgate will be closed ahead of any future flooding event. The wall will protect the adjacent Margaret Cochran Corbin VA Campus and Hospital, as well as the park’s recreation center and outdoor pool, allowing it to stay online after a major storm. The playground and basketball court areas have also been rebuilt with resilient materials and play equipment that has been designed to withstand future flooding. In the event of a storm, the playground will be able to reopen more quickly due to these new resiliency features.

“Preparing our city for more frequent and more intense storms requires a visionary transformation of our public spaces, our infrastructure, and our approach to how our built environment serves New Yorkers,” said Kizzy Charles-Guzman, executive director, MOCEJ. “The completion of the first section of the East Side Coastal Resiliency project marks a critical milestone in one of the most ambitious and technically complex climate infrastructure projects in New York City history. The new Asser Levy Playground has been rebuilt as infrastructure to protect the community it serves from storm surge and sea level rise, and is an example of our work to ensure New Yorkers can live, learn, work, and play in safe, healthy, resilient, and sustainable environments, even as the climate changes.”

The ESCR project is also upgrading East River Park, Corlears Hook Park, Murphy Brothers Playground, Stuyvesant Cove Park, and other open spaces in the area, making them more resilient and accessible for all, while adding new and improved amenities, including improved waterfront access through reconstructed bridges and entry points. East River Park will be elevated approximately eight feet with upgraded recreational facilities, new passive-use areas, and approximately 2000 trees — including 50 different species selected for their ability to withstand salt spray and extreme weather. The ESCR project will also build footings for a future pedestrian bridge elevating the Manhattan Greenway over its narrowest point along the East River, improving community access to the park.

NYC Parks has additionally made numerous improvements to local parks and open spaces as part of the city’s response to the community’s need for supplemental recreational resources during project construction. New Yorkers looking for more information on where to play and relax during construction can visit NYC Parks’ Recreational Resources map.

“One of the nation’s largest resiliency projects doesn’t just prevent flooding, East Side Coastal Resiliency also enhances open spaces and recreational spaces for more than 110,000 residents,” said DDC Commissioner Thomas Foley. “Asser Levy Playground is the first of five park areas to reopen with new resilient play equipment and flood protection integrated into the landscaping. Other local parks will be rebuilt with new bridges, better pedestrian access, new play areas, and thousands of new trees. This comprehensive approach to planning and integration is a model for future coastal protection projects that seek to improve waterfront access.”

The level of flood protection provided by ESCR is equal to the region’s “worst-case” anticipated 100-year storm in the 2050s, based on future climate change projections produced by the New York City Panel on Climate Change (NPCC ), an independent body composed of climate scientists that advises city policymakers on local resiliency and adaptation strategies.

The project uses an adaptive design that can accommodate the addition of two more feet of elevation throughout the project area should sea levels in the coming decades rise faster than current projections anticipate.

“We are proud to have worked alongside the city on this vital infrastructure project,” said Bruce Tucker, interim medical center director, VA New York Harbor Healthcare System. “By protecting our facility and the surrounding neighborhood from climate-related events, the East Side Coastal Resiliency Project will help us continue to deliver world-class health care to New York’s Veterans.”

The city previously sponsored an ESCR “Call For Art ” for New York City students from kindergarten to 12th grade plus local artists highlighting the importance of coastal protection and resiliency. More than 40 pieces were selected based on themes varying by grade level. Each piece was rated on the responsiveness to the theme, creativity, originality, artistic quality, composition, visual impact, and overall impression.

“This revamped Asser Levy playground not only looks great, but it is also adding critical flood protection for this East Side neighborhood. This area was severely battered by Superstorm Sandy. We are proud to have played a role in planning for this public amenity and in protecting New Yorkers from the serious risks of coastal flooding,” said DCP Director Dan Garodnick.

Selected pieces have been reproduced on 12-feet by 5-feet vinyl banners and are on display throughout the East Side Coastal Resiliency project area. Students whose works were selected for display were honored at a ceremony at Asser Levy Playground in June.

All photos of Asser Levy Playground courtesy of NYC Parks.