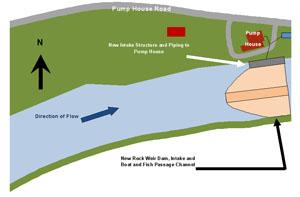 This 2009 article describes how an outdated 1927 Montana dam was rehabilitated so as to allow both fish and boat to bypass it.

For the first time since the prohibition era, fish soon will move unrestricted throughout the Big Hole River system. The diversion dam at Divide will be removed next summer, and a proposed replacement would allow boat and fish passage.

“The existing dam has failed in recent years as the aging structure, constructed around 1927, continues to deteriorate,” said Dick Talley, the project engineer with DOWL HKM, a Butte engineering firm.

Replacing the dam has been on Butte-Silver Bow’s wish list for several years, and the up to $5.5 million project now will be completed with money from the Natural Resource Damage Program.

Mike Bias, a Twin Bridges outfitter who serves on the project advisory committee as executive director of the Big Hole River Foundation, sees numerous benefits with the project. “From our perspective, anything you do to remove a barrier like that is good for the river and from the outfitting and guiding point of view anything you can do to allow boat passage through a hazard is a good thing,” he said.

REVITALIZATION readers are invited to comment below on how well this rehab has worked in the ensuing 6 years, both from the standpoint of restoring fish populations and of revitalizing the local tourism economy.