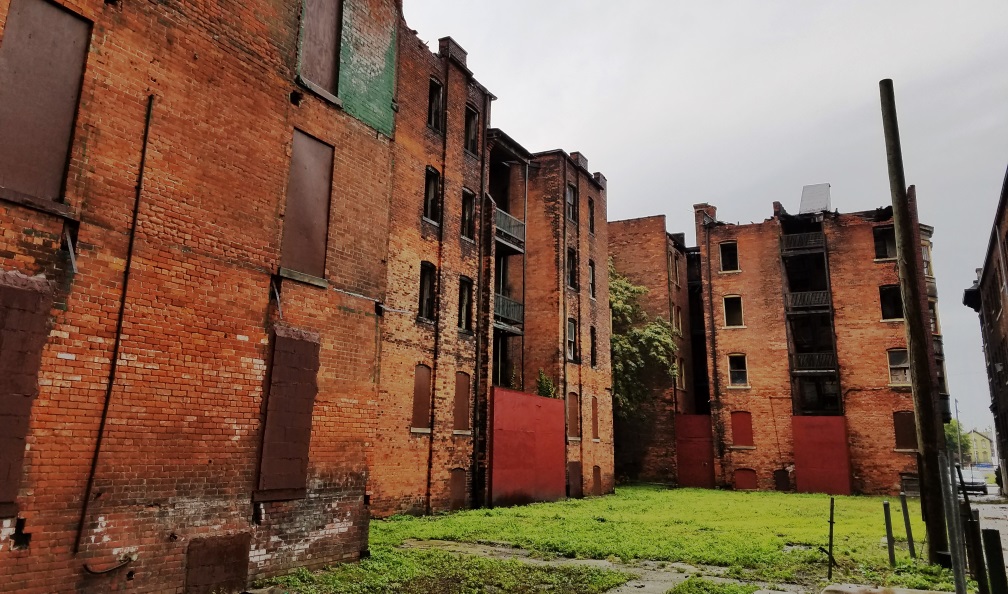 The plan relies on a simple strategy popular in the 1970s, urban homesteading (PDF), where a quasi-public entity, such as a land bank authority, leverages new sources of federal dollars to acquire vacant homes and then partners with qualified low-income homeowners to rehabilitate properties.

To join the program, cities would submit a plan to the U.S. Department of Housing and Urban Development (HUD) outlining their strategy for connecting the homesteading properties with other infrastructure investments and revitalization initiatives.

The problem’s scope and impact vary among cities and neighborhoods, depending on the relative strengths or weaknesses of the regional economy, local housing market, and local government capacity. In older industrial legacy cities, such as Baltimore and Detroit, hypervacancy creates a dynamic where some neighborhoods are undergoing gentrification while others nearby are plagued by blighted buildings and less economic opportunity.

Urban homesteading moves in the right direction, but it would only affect a portion of a city’s vacant properties. The plan would likely work best in middle neighborhoods (PDF) with modest property abandonment, some threshold market strength, and community-based organizations and capacities. The homes must also be in good physical condition, where it makes financial sense to rehabilitate them.

In other parts of many older industrial legacy cities, the inventory of vacant homes, empty businesses, and abandoned buildings outpaces the current and projected city and neighborhood populations. That means cities would still need to demolish vacant homes to reduce supply and maintain thousands of vacant properties and lots while city officials, nonprofits, and residents reach consensus on realistic reuse alternatives.

Considering these realities, local governments and their residents can’t do this work on their own. Cities need state and federal support to ensure they have the following five elements necessary to reclaim vacant properties and revitalize neighborhoods.

No one knows how many vacant properties are in the US, and few communities have comprehensive and accurate data on their vacant properties. A few cities, such as Detroit, Cleveland, and Memphis, have conducted periodic, block-by-block property condition surveys to get a general idea of the vacant property type, its location and physical conditions, and basic ownership information. Though such inventories require resources and time, they are critical to determining the appropriate course of action for each property (which must then be and paired with neighborhood markets, revitalization strategies, and relevant social and educational services).

Beyond these inventories, communities need reliable and consistent information infrastructure to harvest and analyze the multiple national, county, and city real property databases and share information with local officials, civic leaders, and residents.

But only a handful of states have established the legal authority to create land banks, and these banks’ powers vary widely. Federal and state policies would need to include financial and capacity-building support for land banks to operate these initiatives.

Despite multi-billion-dollar programs at all levels of government over the past decade to demolish and rehabilitate vacant and foreclosed homes, hundreds of cities still lack sufficient resources to address their inventories of vacant properties.

“Pay for success” could help cities raise money to address vacant properties. Under the pay for success model, private and philanthropic social impact investors provide up-front capital to service providers (potentially land bank authorities, nonprofit intermediaries, or local governments) to carry out a program. Governments then repay investors only if the project achieves predefined outcomes. This allows governments to avoid some financial risk and pay only if the project’s benefits are realized.

The high up-front costs to demolish or remediate properties can create significant barriers to action. That’s where pay for success can come in, because it offers up-front financing and potential financial benefits cities can use to repay investors. Investor funding could support demolitions that result in cost savings for municipal services, or it could support urban greening of vacant lots, which can increase adjacent property values and property taxes, as well as enhance water quality through improved storm water infrastructure.

Governments would then repay investors based on outcomes they want to incentivize, such as the number of properties demolished, the number of parks created, decreases in municipal costs, or improvements in water quality.

Initiatives to reclaim vacant properties are only as successful as their community stewardship and engagement. Communities with nonprofit intermediaries, such as Neighborhood Preservation Inc. in Memphis, Tennessee, and the Youngstown Neighborhood Development Corporation in Ohio, and robust community development corporations are often more effective in reclaiming vacant properties. These community intermediaries provide critical civic infrastructure that ensures residents have an active role in decisions about reuse and changes to local polices, programs, and practices.

Though some cities, such as Washington, DC, Las Vegas, and New York, relied on private market strategies to address their property vacancy and abandonment issues, many other cities, such as Cleveland, Detroit, and Baltimore, still have neighborhoods with substantial inventories of vacant properties.

These cities will need federal and state support to build the policy and programmatic infrastructure necessary to bring together government, community groups, residents, and the private market. These resources need to unleash city and civic capacities to improve the quality of available data, scale existing technical capacities, identify new resources and funding sources, and develop the civic infrastructure that allows for large-scale change.

Photo of abandoned apartment building in Detroit by Storm Cunningham.

This article by Joe Schilling and Brian Bieretz originally appeared on the blogsite of the Urban Institute. Reprinted here by permission.