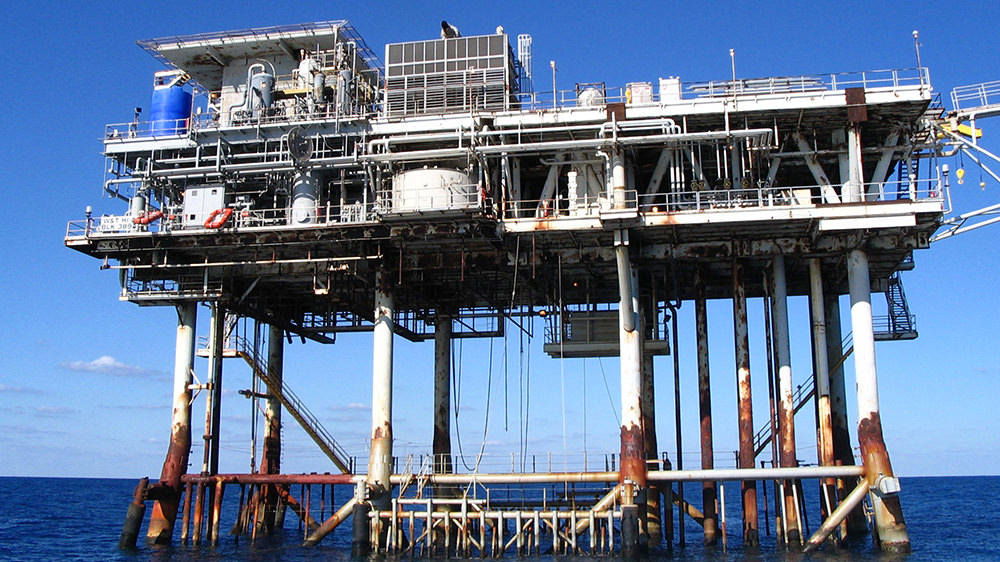 The good news is that restoring this mess boosts the global restoration economy. And, as we’ve previously documented here in REVITALIZATION, there’s a movement underway (such as the Rigs-to-Reefs (R2R) program mentioned below) to clean-up these offshore rigs in a way that also preserves the often-valuable marine ecosystems that have formed on the submerged structures.

The Bureau of Ocean Energy Management (BOEM) manages more than 2,000 active oil and gas leases with over 55,000 wells across 10.9 million acres of the Outer Continental Shelf (OCS). Approximately 58 percent of these wells—more than 32,000—are permanently or temporarily abandoned. Poorly decommissioned, abandoned, and orphaned wells are a direct threat to our environment, society, and economy.

For example, the longest oil spill in U.S. history—at Taylor Energy’s platform at the mouth of the Mississippi River—was caused by an abandoned well that leaked into the Gulf of Mexico and was not resolved until the Department of Interior took steps to decommission it.

Off the coast of California, Platform Holly decommissioning has cost the state $64 million thus far after its owner, Venoco, filed for bankruptcy. The state is simultaneously bearing the full cost to decommission wells on the Rincon Pier—again due to operator bankruptcy—and has appropriated $50.6 million to the effort.

Abandoned and orphaned offshore wells are at high risk of leaking and spilling oil or gas into the environment. Limited monitoring and record keeping have allowed these occurrences to largely fly below the radar, making them difficult to track. While there have been limited studies on this in the United States, there has been extensive research in the North Sea.

Delaying cleanup can also lead to costlier decommissioning efforts later on, as platforms can be exposed to corrosion, damage from storms, and can create navigational problems for ships. Coastal communities are presented with additional risks, since they may rely on affected areas for recreational, subsistence, and commercial fishing. These communities can also experience lost wages and economic hardship due to the disruptions to their livelihoods.

To address these issues in onshore wells, the Infrastructure Investment and Jobs Act includes an investment of $4.7 billion for the plugging, remediation, and restoration of orphaned wells.

However, there has been no similar investment for offshore wells. Congress and the Biden administration have an opportunity to create good jobs and protect ocean health by investing in offshore well cleanup.

Oil and gas corporations—or operators—are required by the Outer Continental Shelf Lands Act (OCSLA) to “decommission” wells when they either become an environmental hazard or are no longer economically viable.

However, operators may request to “temporarily abandon” a well should they see a need to come back to it in the future. This process has been repeatedly abused by oil and gas companies who will partially decommission their wells and allow them to remain in this state for decades to escape the full decommissioning costs. An estimated 3,364 wells are “temporarily” abandoned, with a median age of 38 years since they were drilled.

Other wells have been deemed “orphaned,” meaning that they are left unplugged without a legally responsible party to oversee plugging requirements and site restoration. Offshore drilling began in 1896, and states were responsible for leasing until the mid-1900s. During this period, there was limited and inconsistent record keeping and monitoring of the various operators. Because of the lack of data, it is difficult to determine just how many wells in federal waters are orphaned.

When wells are abandoned—either temporarily or permanently—the federal government has little recourse. While operators are required to put up surety bonds during the leasing process, the bonding amounts are grossly inadequate to cover decommissioning costs. In 2015, of the $35.9 billion in decommissioning liabilities in the Gulf of Mexico, the Department of the Interior (DOI) held only $2.9 billion in bonds.

The DOI waived the remaining $33 billion in liabilities for lessees that passed a financial strength test but operators are declaring bankruptcy at increasing rates. The BOEM estimates that there have been more than 30 “Chapter 11” bankruptcies of operators with offshore assets bearing $7.5 billion in decommissioning liability since 2009.

In one instance, Fieldwood Energy filed for bankruptcy for the second time in less than three years, proposing either the abandonment or “returning to predecessor operators” of over 1,170 wells, 280 pipelines, and 270 drilling platforms. The Bureau of Safety and Environmental Enforcement (BSEE) estimates liabilities for currently orphaned infrastructure on the OCS are about $65 million, but the Government Accountability Office estimates there are approximately $2.3 billion in decommissioning liabilities on the OCS that are not covered by bonds.

As the United States moves toward a clean energy future, a comprehensive strategy to address abandoned and orphaned offshore wells would present an opportunity to prevent pollution, create jobs, and hold irresponsible corporations accountable. Congress and the Biden administration should take action to ensure that the DOI has the mandate and resources it needs to take bold and decisive action.

BSEE must strengthen the enforcement of decommissioning obligations, and any operator that enters a lease agreement must be expected to meet these requirements without delay. As per BSEE regulations, operators are required to apply for and obtain a permit for platform removal, which they commit to when signing an offshore lease. This process must ensure that operators comply with every stage of the production process, including timely and proper decommissioning. These enforcements require time and, in the interim, a Government Accountability Office report should be completed to explain why enforcement has been neglected.

In California, the Biden administration is conducting a programmatic environmental review to address potential decommissioning of platforms, including eight that no longer produce oil or gas on terminated leases. There is no requirement for the remaining platforms to be decommissioned. Companies must provide the BOEM with a two-year notice prior to the planned decommissioning process is set to commence. Decommissioning itself is also a lengthy process: Platform Holly is expected to take two years depending on equipment availability and compliance with the California Environmental Quality Act (CEQA).

Congress and the Biden administration have an opportunity to create good jobs and protect ocean health by investing in offshore well cleanup.

The BSEE has requested $30 million in fiscal year 2022—and maintained that request in fiscal year 2023—to properly plug orphaned wells and associated pipelines. According to BSEE’s own analysis, it costs $344,000 to $421,000 to decommission a well. According to a recent Columbia University analysis, it would cost an estimated $9.8 billion just to cover temporarily abandoned wells in federal waters.

Given that the entirety of the BSEE requested $261.2 million in fiscal year 2023, this amount is unlikely through the regular appropriations process. The Biden administration should request a higher sum. Congress should then appropriate additional funds to make progress on this thorny issue. Additional investment in this area could also support approximately 10,500 good-paying jobs annually over 10 years. These jobs would be tailor-made for oil and gas workers as well as additional jobs in the oil and gas inspections workforce to detect harmful methane leaks—which have cascading effects on the environment and people—and survey orphan wells for cleanup.

Advance the Rigs-to-Reefs program in the Gulf of Mexico

After decades in the water, marine species have become accustomed to the platforms in their habitats. In order to minimize disruptions to wildlife, the BSEE may allow operators to apply for permitting for partial removal of platforms if it complies with the National Artificial Reef Plan; U.S. Coast Guard navigational requirements; and engineering and environmental reviewing standards. These wells must also be properly plugged so that future gas or oil does not leak and harm marine wildlife.

The Rigs-to-Reefs (R2R) program proves to be successful in the Gulf of Mexico, where there is a lack of natural reefs. As of 2020, 558 platforms were reefed in the Gulf of Mexico. In this region, R2R presents an ecological win to affordably plug orphaned wells that have already made their structures part of the ecosystem for decades. This program still requires thoughtful implementation outside of the Gulf region to mitigate the risks of potential leaks of the capped wells into marine habitats and address liability issues.

Thousands of wells were orphaned or improperly plugged prior to federal regulations. Without consistent and adequate information on the number of temporarily abandoned and orphaned wells, the BSEE cannot create specific processes for monitoring these wells, including for their carbon, hydrogen sulfide, and methane emissions. The BOEM and the BSEE must reinforce comprehensive record keeping of the condition and location of all offshore oil and gas wells and facilities and consistent monitoring should continue well after decommissioning has been completed.

To minimize the evasion of responsibilities, the BOEM must require stronger financial assurance from operators equivalent to the full cost of decommissioning obligations to help prevent the stockpiling of orphaned wells. In response to a 2015 U.S. Government Accountability Office study, the BOEM issued a notice to the lessees—“NTL 2016-N01”—that changed the methods of calculating financial strength and required stronger financial accountability of leaseholders.

The Trump administration paused this review, but the Biden administration revived it under its January 25, 2021, executive order on climate. The BOEM announced it would require supplemental financial assurance from high-risk properties, such as inactive wells.

However, there is still a large gap to cover decommissioning costs of the thousands of abandoned and orphaned wells. As more wells are abandoned, the BOEM should expedite the process to secure financial assurances for properties that will no longer be economically viable within five years.

The thousands of orphaned and abandoned oil and gas wells currently located in federal waters demonstrate the importance of reassessing the post-development requirements of offshore oil and gas leasing. Enforcement of existing policies; a robust federal job program; increasing financial obligations; and a comprehensive record-keeping and monitoring process are all viable approaches to both reducing the negative socioeconomic and environmental impacts of these sites as well as the ease with which they come to exist.

The authors would like to thank Jenny Rowland-Shea and Will Beaudouin at the Center for American Progress as well as Linda Krop, chief counsel at the Environmental Defense Center, Sarah Giltz, marine scientist at Oceana, and Lauren Kubiak, senior policy analyst at the Natural Resources Defense Council.

Photo (courtesy of NOAA) shows HI-A-389-A, an eight-leg production platform that was installed by Mobil in 1981 just outside the designated No Activity Zone for oil and gas production at the southeast corner of East Flower Garden Bank. This location is about one mile from the coral reef cap. In 1992, when Flower Garden Banks National Marine Sanctuary was designated, sanctuary boundaries were drawn using the outer edges of the No Activity Zone and incidentally enclosed the abandoned platform inside sanctuary boundaries.

This article by Zainab Mirza, Say Sanchez and Miriam Goldstein originally appeared on the website of the Center for American Progress. Reprinted here by permission.