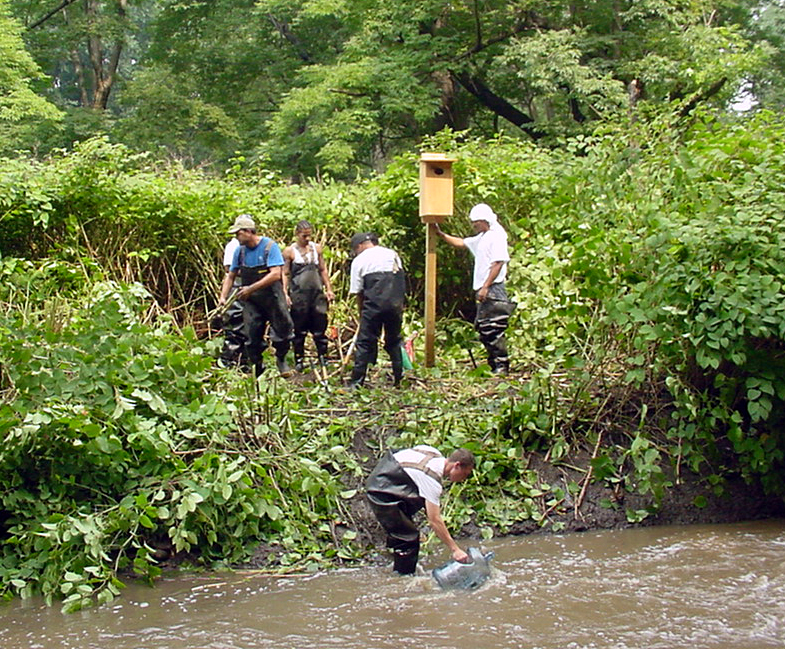 New York City’s Bronx River—once an open sewer—is now teeming with life. We discovered oysters, eels, herons, and even beavers, as we canoed through the poorest congressional district in America.

It was long abused by industry, neglected by the neighborhood, and forgotten by the City. But now New York’s only freshwater river is coming back to life.

The Bronx River Alliance has been spearheading efforts with community organizations and public agencies to clean, restore, and protect the borough’s natural resource.

The Alliance has removed tons of debris from the river over the past 15 years and works with the New York Botanical Garden to restore key marsh habitats and remove invasive plant species.

The Bronx River Alliance serves as a coordinated voice for the river and works in harmonious partnership to protect, improve and restore the Bronx River corridor so that it can be a healthy ecological, recreational, educational and economic resource for the communities through which the river flows.

The Alliance works in close partnership with the New York City Department of Parks & Recreation to achieve these goals.

About the Bronx River:

In 2012, the lower eight miles of the Bronx River was designated a National Water Trail by the National Park Service in recognition of how far we’ve come in reclaiming the river as a recreational asset.

To walk along the Bronx River today is to enter a world slightly apart from the city, where the cry of the redwing blackbird is louder than the hum of cars not twenty feet away.

One of the little-known marvels of the New York City landscape, the 23-mile Bronx River winds down through southern Westchester and the Bronx to define a peaceful corridor of greenery for fishing, strolling, biking, boating and nature study amid the noise and bustle of urban life. It is the only major watercourse within the city limits that is not entirely tidal.

Called Aquehung or “River of High Bluffs” by the Mohegan tribe who first lived and fished along it, the river attracted European traders in the early 1600s for the sleek, fat beaver that proliferated there. In 1639, a wealthy Swede, Jonas Bronck, purchased 500 acres from the Mohegans, and mills began to sprout up and down “Bronck’s River.” By the mid-1700s as many as 12 mills were manufacturing paper, flour, pottery, tapestries, barrels and snuff, powered by water from the stream.

The river valley remained thickly forested well up into the 1800s. In his 1817 poem “Bronx,” Joseph Rodman Drake described “rocks” and “clefts” full of “loose ivy dangling” and “sumach of the liveliest green.” The water was considered so “pure and wholesome” that during the 1820s and 1830s the New York City Board of Aldermen debated ways to tap into it to supply the growing city with drinking water.

The construction of the New York Central Railroad in the 1840s turned the valley into an industrial corridor, and by the end of the 19th Century the Bronx River had degenerated into what one official commission called “an open sewer.” The history of the river since the 1880s has been one of efforts to reclaim and protect it from the escalating forces of urbanization.

The consolidation of various properties to form the 662-acre Bronx Park in 1888 provided a buffer against development on either side of the river. The Bronx River Valley Sewer, initiated by Westchester County in 1905, began absorbing some of the worst sewage. The largest project was the Bronx River Parkway, completed in 1925. The 15.5-mile ribbon of parks, lakes and limited-access roadway stretching from the Kensico Dam to Bronx Park provided a landscaped recreation zone and a pleasure drive for cars passing through at low speeds.

Today, hundreds of thousands of commuters speed across the Bronx River and dozens of industries flourish on its banks. But underneath the highways and elevated tracks, behind the ware-houses and guardrails and fences, the river still rushes along, providing a necessary slice of nature for ducks and bike-riders, turtles and toddlers, perch, tuliptrees, great blue heron, and fathers and daughters with fishing poles. As the 20th Century becomes the 21st, people are returning to the Bronx River, drawn back to a place that has remained true to itself in a region where much else has changed.