When ‘Akilisi Pōhiva, the Prime Minister of Tonga, shed tears at a regional summit on climate change in August, it brought home the agony of Pacific islanders grappling with the reality of global warming and rising seas.

During a leaders retreat at the Pacific Islands Forum, Pōhiva cried as he reflected on a presentation given by two young women about their fears for the future.

Tonga and other Pacific Ocean island states are particularly vulnerable to the effects of global warming. Rising seas pose an existential threat to many communities while the economies of these developing nations are fragile and often ill-equipped to deal with the aftermath of increasingly frequent extreme weather events. 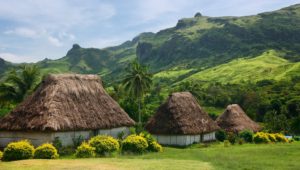 This fragility is partly driven by geography: the remoteness of the Pacific Islands, the small size of their markets and narrow resource base all contribute to high trade costs and vulnerability to external shocks, such as natural disasters and commodity price fluctuations.

But these vulnerabilities need not spell disaster. Trade can play a pivotal role in creating more resilient systems by facilitating the exchange of goods, services and technologies designed to help nations mitigate, adapt and build resilience to environmental and economic shocks.

A recent study by the UN Environment Programme (UNEP), its research partners and the European Union showed that increasing trade in environmentally sound technologies—such as renewable energy, waste and water management technologies—can play an important role in supporting climate action and resilience building, as well as facilitating the transition towards more circular and greener economies.

Today, there are increasingly vocal calls for Aid for Trade to be better harnessed to help developing countries cope with the challenges posed by our changing climate, and to be focused on areas that mutually support countries’ environment and economic goals. 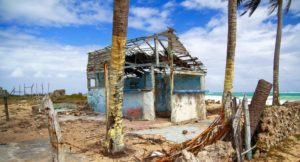 “Developing countries face the challenge of ‘double exposure’ to both economic shocks and environmental challenges, which have been exacerbated by climate change,” said Anja von Moltke, head of the Environment and Trade Hub Unit at UNEP.

“Systematically integrating environmental considerations in Aid for Trade investments—constituting roughly 30 per cent of total official development assistance—could be an effective mechanism through which to build climate resilience. This is particularly important for small island developing states that are highly vulnerable to the impacts of climate change,” she added.

As the world grapples with the reality of rapid climate change, the United Nations is seeking to build a global consensus for transformative social, economic and environmental policies to ensure the survival of the planet.

The pivotal Climate Action Summit being held in New York on 23 September 2019 offers member states an opportunity to make concrete commitments on cutting emissions to slow global warming. UN Secretary-General António Guterres has said “bold action and much greater ambition” will be needed to limit temperature increases to 1.5°C and avoid the worst impacts of climate change.

The “rapid and deep change” required to put the world on a path to sustainability must also harness the power of trade to drive the shift from a polluting global economy to a green economy that protects the planet, jobs and people.

For Pacific Island states, there is no time to waste. The 2018 World Risk Report gave Vanuatu the highest disaster risk rating and placed

In 2015, Tropical Cyclone Pam devastated Vanuatu, causing a 64 per cent drop in the island’s gross domestic product. The cyclone was followed by a severe drought that affected agriculture and tourism, two key export sectors. Vanuatu is also experiencing other negative effects from climate change, including increased air temperatures, higher levels of ocean acidification and coral bleaching.

The potential of Aid for Trade was highlighted during the 2019 Aid for Trade Global Review at the World Trade Organization in July, where UN Environment and the European Union hosted an event to discuss Aid for Trade as a vehicle for climate resilience.

“At the UN Environment Programme, we see great potential for the trade, development and environment communities to work more closely together in pursuit of the Sustainable Development Goals and the Paris Agreement,” said Steven Stone, chief of the Resources and Markets branch at UNEP.

“Cohesive policy and investment frameworks, capacity building and partnerships are key to making trade work better for people and the planet,” he added.

The meeting heard that trade can help build resilience by improving access to a range of mitigation and adaptation technologies; unlocking trade for emerging green businesses; increasing the availability of services; improving standards through alignment to international standards; reducing vulnerability to sudden disruptions or changes in resource flows; and diversifying the economy.

In a joint report published by UNEP and the World Trade Organization entitled Making trade work for the environment, prosperity and resilience, Aid for Trade is featured as an important tool for promoting resilience and ensuring trade works for sustainability and prosperity. The UN Environment Progamme and the World Trade Organization, in partnership, continue to explore innovative ways of using trade to mutually strengthen economies and environments, including through Aid for Trade.

While Pacific Island states are among the most vulnerable, no country is immune to the risk of more frequent, devastating natural disasters. Last year, natural hazards caused US$160 billion of damage, and claimed just over 10,000 lives. In 2017, the cost was even higher at US$350 billion because of a ferocious hurricane season in the Atlantic.

African countries are also exposed as some face a potential temperature rise of between 3°C and 4°C by the end of the century. In West Africa, for example, reliance on climate-sensitive activities such as rain-fed agriculture, livestock rearing, fisheries and forestry increase countries’ exposure to extreme weather variations.

“It is also important that foreign investments in Africa, and in other regions, allow leap-frogging to low-emissions and climate-resilient pathways and become a building block of sustainability and decent job creation,” said Madelaine Tuininga, head of the Trade and Sustainable Development unit at the European Commission.

Photo of Tonga via Adobe Stock.

This article originally appeared on the UNEP website. Reprinted here by permission.