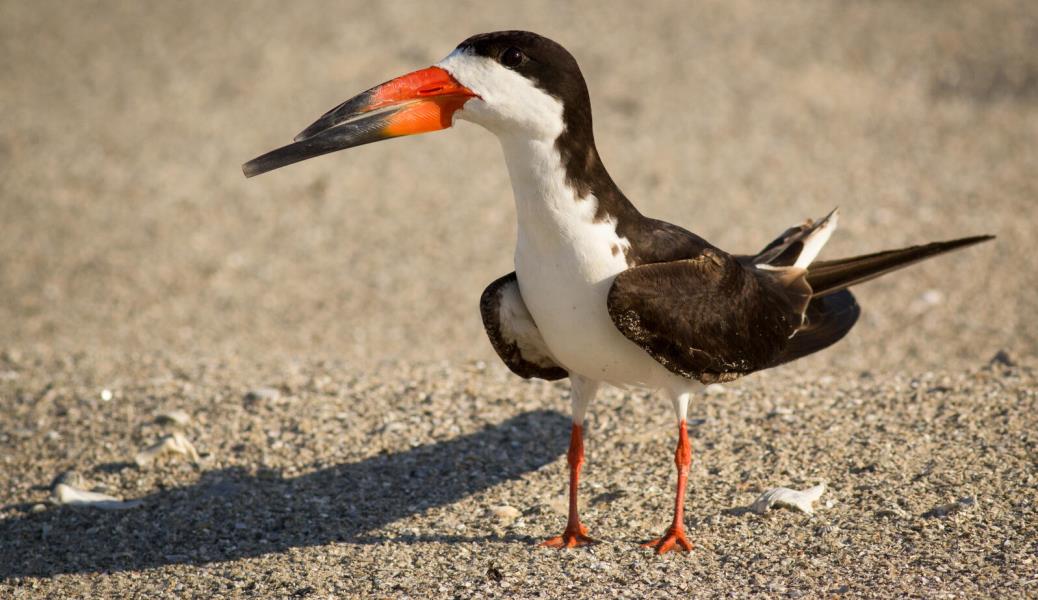 Amidst a month of devastating news in Louisiana since Hurricane Ida made landfall, the National Audubon Society has some happy news to share about beach-nesting birds.

For the first time in 10 years, Black Skimmers successfully fledged chicks on the Louisiana mainland, thanks in part to a recent project to restore beaches in the southwestern corner of the state.

Black Skimmers are striking black-and-white seabirds with a fascinating bill. Their lower mandible is longer than the top, looking almost like an under bite. Skimmers get their name from flying just above the water with that long, lower mandible skimming the water for food. When it hits a fish, it automatically snaps shut.

Black Skimmers often nest on remote barrier islands, with only a handful of failed nesting attempts documented on the Louisiana’s mainland beaches in Cameron Parish since our coastal stewardship program’s inception in 2011.

Here’s what Audubon says about this restoration success: 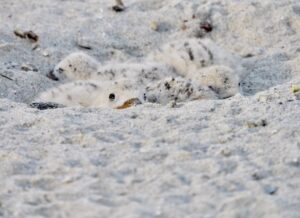 Four baby Black Skimmers huddle in their shallow, sandy nest—the first discovered in Cameron Parish this year. Camouflaged feathers keep them hidden from predators as well as beachgoers, who can inadvertently get too close. Photo: Charlotte Chehotsky.

In late July this year, our seasonal biologists located a Black Skimmer nest “scrape,” or a depression in the sand, containing four chicken-sized eggs along the Cameron Parish shoreline restoration site near Holly Beach. By mid-August, three skimmer pairs had initiated nesting in the area, and with the help of volunteers, we installed symbolic fencing and stewarded the nesting area.

Over Labor Day weekend, we successfully safeguarded skimmer chicks from nearby beachgoers and vehicular traffic with additional support from local Cameron Parish law enforcement and a dedicated volunteer, Charlotte Chehotsky. Black Skimmer nesting activity persisted through late September, and we continued to monitor and steward the protected nesting area from human disturbances until the final chick had fledged.

One potential reason for this nesting success story is the Cameron Parish Shoreline Project. Completed in February 2014, this state-funded project restored 5 miles of coastline east of the town of Holly Beach by dredging sediment offshore and pumping it onto the eroded coastline. Sand fencing was then placed the following year to accelerate dune formation and prevent drifting sand from accumulating onto the nearby highway.

This large-scale restoration project not only protects our coastal communities from storm surge and sea-level rise, but also provides dune-nesting habitat for several migratory nesting species, including Least Tern, Wilson’s Plover, and Common Nighthawk. Black Skimmers are now the newest species to benefit from this beach restoration project.

Each year, Audubon monitors and protects beach-nesting birds during the spring and summer months along beaches on the other side of the state as well, including restored Caminada Headlands (Elmer’s Island Wildlife Refuge) and Grand Isle State Park. Many Least Terns and Wilson’s Plovers have benefited from large-scale coastal restoration projects and nest at these restoration sites annually.

These sites in southeastern Louisiana were in the direct path of Hurricane Ida, which made landfall as an extremely dangerous category 4 storm last month, devastating many coastal communities in southeast Louisiana. We do not yet know how the storm has affected these beaches or their ability to support beach-nesting birds when they return next spring. Meanwhile, southwest Louisiana is still recovering from hurricanes Laura and Delta, which wrecked Cameron Parish during the 2020 hurricane season.

Collectively, hurricanes Laura, Delta, and Ida impacted every one of Audubon’s coastal bird stewardship sites in Louisiana, but fortunately the timing of these storms were after breeding season had ended and did not lead to any nest or chick loss. It is possible, too, that these storms reduce the number of nest predators, like coyotes and ghost crabs, which may have also led to the skimmer’s success on Holly Beach. We are eager to see if nesting birds in southeastern Louisiana have a similarly productive year in 2022.

The ongoing support from our volunteers and the local community have only increased the success of our local beach-nesting birds, and we are grateful for the continued investment in protecting coastal habitats, especially our restored beaches that provide places for these birds to nest. We are thrilled to have the opportunity to witness successful nesting of mainland Black Skimmers, and hope to have these beautiful birds nest on our mainland beaches for many years to come.

Featured photo (by Katie B. Barnes/Audubon Delta) shows a Black Skimmer on a beach in Cameron Parish, Louisiana.