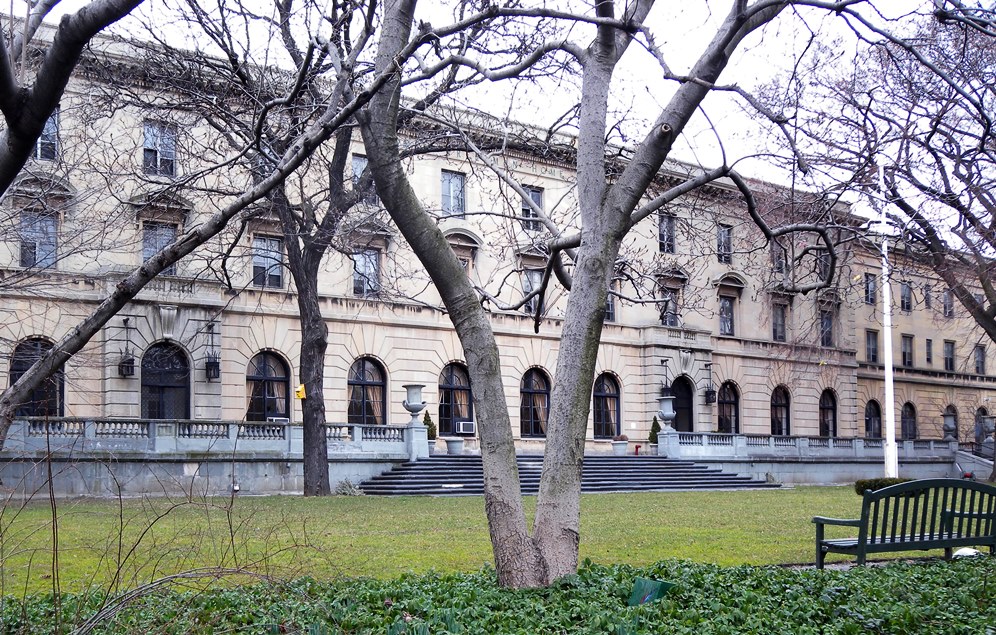 Built in 1924, the Andrew Freedman Home originally functioned as a retirement home for down-and-out former millionaires who wished to maintain a bit of dignity in their old age. Some called it a “poorhouse for old rich folks“. “It was an unusual idea — even back then,” says Bronx borough historian Lloyd Ultan. “I don’t know of any other institution like that, that ever existed.”

The Italian Renaissance-inspired manor is now a New York City Designated Landmark. The trust that operated the Andrew Freedman Home ran out of money in the 1960s, and the mansion for the previously wealthy shut down.

The Mid-Bronx Senior Citizens Council (MBSCC) purchased the property in 1984, and reopened it as a home for elderly individuals. Most of them had never been wealthy, or even close to it. Those residents were moved to other digs in 2007, and the mansion—with its magnificent terrace and grounds—sat vacant until 2012.

At that point, MBSCC repurposed it as a cultural art center. It offered two-year residencies to artists, who get a free studio in exchange for teaching classes and workshops and participating in exhibits and performances. At any given time, the home has welcomed 14 to 21 residents, according to Walter Puryear.

In all, some 16,000 visit the home annually for various activities, including several youth programs and workforce development trainings focused on carpentry and electrical, plumbing and hospitality skills.

Now, the Andrew Freedman Home has won $1.7 million in New York State funding for a major renovation that will make large sections of previously-uninhabitable space available.

“This really should be something that helps revitalize this part of the Bronx … that serves both the neighborhood and the larger community — that’s what we’re looking to do,” said MBSCC’s executive director Jeanette Puryear. “It’s going to need more than $1.7 million,” she added, to let potential donors know of the opportunity.

The Mid-Bronx Senior Citizen’s Council Inc. is one of the largest minority-controlled and operated community-based organization in the Bronx. The agency sponsors a comprehensive range of services provided for, and largely by, members of the South Bronx Community. From human services to housing development programs and activities, are designed to accomplish the following goals;

Photo of the Andrew Freedman Home in 2010 is by Jim Henderson via Wikipedia.

See article by Sarina Trangle in AM New York.