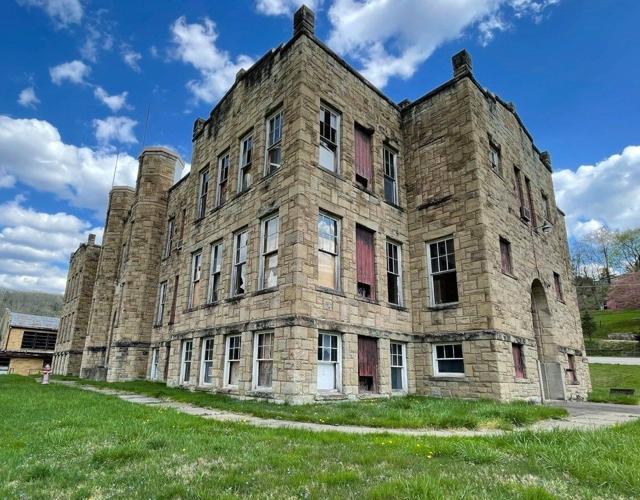 Followers of the “Best of Zillow” Twitter account went wild when the 100-year-old Calhoun High School was listed for sale in Grantsville, West Virginia earlier this year.

“It caused such a big commotion,” explained Crystal Mersh, president of the school’s graduating class of 1982, “that it ignited an idea, a very large idea of how we could use the school to revitalize our community and create a model to be followed by other small towns in Appalachia.” 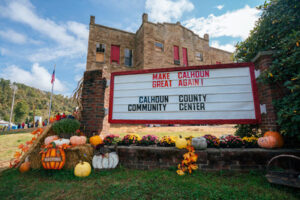 A “Make Calhoun Great Again” sign greeted the 900 people who attended Saturday’s ceremonial brick-breaking. Roger Hanshaw, Speaker of the West Virginia House of Delegates, spoke to the assembled crowd and hailed The 1982 Foundation’s efforts as an example of how “we as communities can change our destiny.”

Now, The 1982 Foundation, led by Mersh, is the proud owner of the castle-like structure with the storied past and the bright future. The school will be turned into a community center with classrooms, meeting rooms, AirBnb hotel rooms, office space for lease, a gym, a swimming pool, and a day care.

The 1982 Foundation is a 501(c)(3) nonprofit with the goal of revitalizing Calhoun County through the creation of this self-funding, mixed-use community center.

The school was the hub of the community. “There was always something going on at the school and the folks that lived out the furthest had a reason to be in Grantsville,” explained Butt, “Now, there’s no reason.” 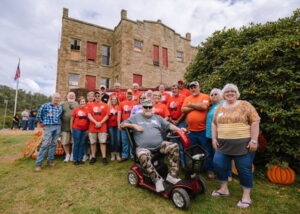 Calhoun County High’s Class of 1982 purchased the 100-year-old building and is leading the charge behind the renovations.

Experts like Why Rural Schools Matter author Mara Casey Tieken have found that the shuttering of schools can “lead to the closure of local businesses and expedite population losses.”

Tieken, an Associate Professor at Bates College, noted that in many rural communities, schools are the largest employer. “They tie people together,” Tieken explained, “Once the schools are gone, the community loses all of these benefits: There are smaller crowds at the diner.”

The center will host summer and afterschool programs, such as STEM day camps to foster children’s desire to learn and to introduce them to opportunities for their futures.

Labor and materials for the project will be locally sourced as much as possible, injecting a much-needed source of work for the local merchants and tradesmen. 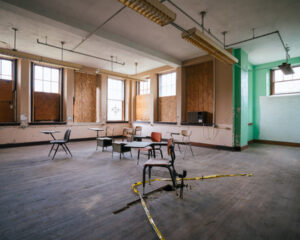 Abandoned in 1998, Calhoun County High used to be the social hub of the community. The 1982 Foundation has purchased the building and is turning it into a mixed-use community center that will breathe life back into the town and surrounding area.

“Over the past forty years,” noted Mersh, “Calhoun County has fallen on hard times as a result of the lack of good jobs, the opioid epidemic and lack of infrastructure to support growth. We are hopeful this model can be a model for many Appalachia small towns to rally and restore their communities.”

West Virginia’s Speaker of the House of Delegates, Roger Hanshaw, and Secretary of Economic Development, Mitch Carmichael, attended the brick-breaking event and the 800-person festival on October 9, 2021 in the building’s honor. Mersh’s grandfather helped lay the original bricks for the building 100 years ago in 1921.

“We have excellent support from the community,” said Mersh, “The center is by far the biggest thing to have happened in Calhoun County for a very long time.”

Mersh, who went to nearby Fairmont State after graduating, credits “the fine people of this county for instilling values, hope, and dreams that are hard to find. All of us at the 1982 Foundation want that same kind of growing-up experience for the kids of this area for many years to come.”

Photos courtesy of The 1982 Foundation.