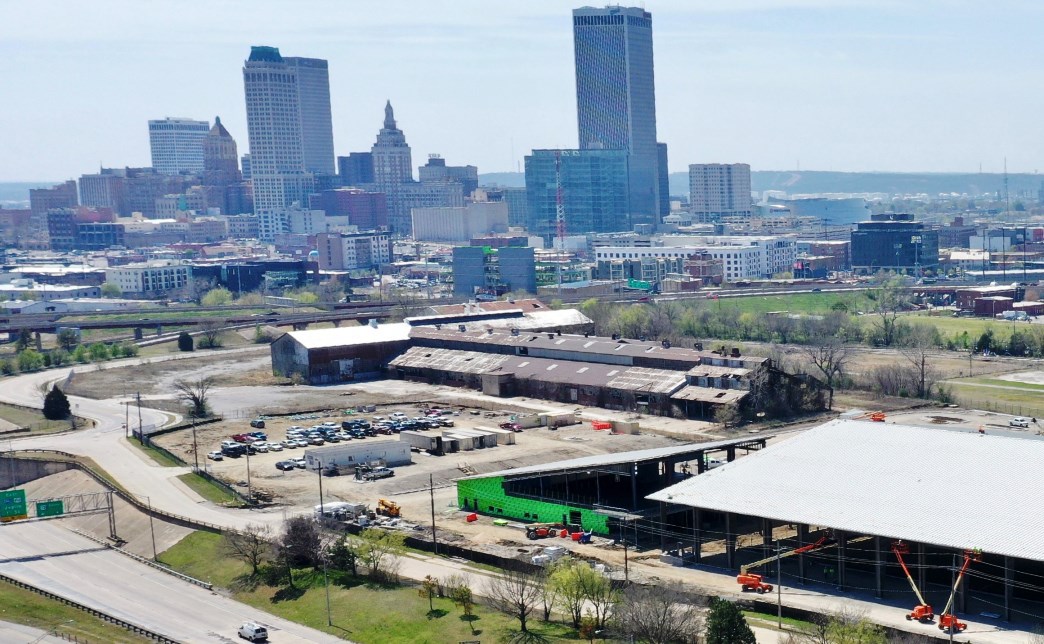 Located a half-mile from downtown Tulsa, Oklahoma, the derelict Evans-Fintube brownfield site is primed to become the next major destination in the city.

The city aims to redevelop the former industrial facility, including the 120,000 square foot Oklahoma Ironworks Building, into a mixed-use destination district.

Evans-Fintube sits on the eastern edge of the Greenwood District. In the early 20th Century, the neighborhood became a thriving African American entrepreneurial center famously centered around Black Wall Street.

Much of Greenwood was burned to the ground in the 1921 Tulsa Race Massacre when a mob of thousands of white Tulsans invaded Greenwood, killing up to 300.

Thus, locals feel that the Evans Fintube project must create a place that simultaneously recognizes the history of the site and creates economic opportunity and wealth for the community.

Now, on August 10, 2021, the City of Tulsa, the Tulsa Authority for Economic Opportunity (TAEO), and the Evans-Fintube Steering Committee announced the selection of four respondents to move forward to the Request for Proposals (RFP) stage for the redevelopment of the Evans-Fintube site in the Greenwood District.

The 11-acre site, which currently houses the historic Oklahoma Ironworks building on the corner of E. Archer St. and N. Lansing Ave., is being eyed for housing units and commercial and retail space.

Back in April of 2021, City officials announced a Request for Qualifications (RFQ), seeking redevelopers who felt they had the best ability to take on the project.

“I am thrilled to announce the selection of these four teams to move to the Proposal phase for the Evans-Fintube Redevelopment,” Mayor G.T. Bynum said.

“This project has been years in the making, and this announcement is another major milestone on the path to creating a mixed-use destination district that honors the history of Greenwood and this site,” he added.

Here are the four developers on the shortlist, with their submitted profiles:

Be Good Development Be Good has assembled a passionate team of developers, planners, architects, builders, and economic equity strategies to reimagine a resilient, innovate, and equitable development on the Evans-Fintube site. Be Good has intentionally built a team includes highly engaged local professionals and stakeholders, complemented by national partners skilled in historic preservation, commercial mixed-use development, adaptive reuse, and community-rooted economic development. In partnership with the community, Be Good is poised to co-create a development vision that both acknowledges the generational harm caused by the 1921 Tulsa Race Massacre and rebuilds an ecosystem for prosperity and innovation.

E Smith Legacy, Rose Rock, and Pivot Project The Team came together through a shared interest in not only building communities and urban real estate development, but through a drive to rethink traditional real estate development, to question the status quo, and create a development that is truly inclusive and provides opportunities for all who participate. The Team’s approach will focus on building a community partnership, strategic tenanting to grow local business, creating tenant partnerships to address ownership and wealth building, and creating a thriving mixed-use development.

L+M and McCormack Baron Salazar L&M Development Partners and McCormack Baron Salazar, Inc were thrilled to respond to request for qualifications for the Evans-Fintube property. The firms have a range of experiences working with government agencies and local stakeholders to deliver individual developments and master-planned concepts throughout the United States. Their vision will prioritize directly engaging the local community, reinforcing the local community through programming and design, and equitable investment through affordable housing and long-term homeownership in the surrounding neighborhood.

Twenty20 Management With a community-centered approach, Twenty20 plans to integrate the vision, hopes, and dreams of Greenwood in building a world-class district anchored by this historic site. The team brings years of experience in providing program management and owner’s representation services to both private and public developers. Twenty20’s vision is to develop a mixed-use entertainment and sports hub, which will serve as a catalyst for investment in the area and community revitalization. “We have found four strong teams to compete for the opportunity to develop a new neighborhood that reflects the spirit of Greenwood at the Evans-Fintube site,” District 1 City Councilor and Council Chair Vanessa Hall-Harper, who also sits on the Evans-Fintube Steering Committee, said. “I look forward to seeing each team engage with North Tulsa residents and local Black business partners to create a vision of a District that celebrates Black entrepreneurship and creates economic opportunity for the community that has been systematically devastated by events such as the 1921 Race Massacre, interstate expansion, redlining, urban renewal, and eminent domain.”

Next steps in the process include:

The City and TAEO are seeking local business partners interested in opportunities to partner with developers and work on the project. If you own or work at a construction, engineering, architectural, or other company and are interested in learning more about opportunities, complete the business interest form online.

Email Wyatt Donnelly-Landolt at wdonnelly@cityoftulsa.org with any questions or feedback.

Photo courtesy of the City of Tulsa.

Learn more about the project and see updates.