As first reported in the October 15, 2016 issue of REVITALZIATION, the first worker-cooperative commercial greenhouse in Massachusetts is bringing a toxic old industrial site back to life in the city of Springfield.

Now, almost two years later, it’s about to begin production on what was once a toxic industrial site. Formerly occupied by the Chapman Valve factory, which manufactured components for nuclear weapons, the greenhouse culminates the redevelopment of blighted land once contaminated by radioactivity. 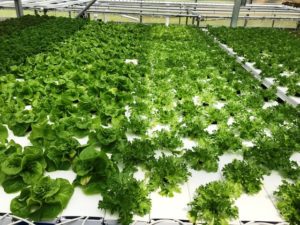 Lettuce with the label “Grown in Indian Orchard” will soon be in the produce aisles of some local stores and in salads made for cafeterias in public schools and hospitals. Full production is expected to begin next month at Wellspring Harvest, the 15,000-square foot state-of-the-art hydroponic greenhouse built on a former brownfields site in Springfield’s Indian Orchard neighborhood.

Wellspring Harvest is the first commercial hydroponic greenhouse in the City of Springfield, located at 121 Pinevale Street in the Indian Orchard neighborhood. The quarter acre (15,120 square foot) greenhouse was completed in April 2018 and will bring healthy, locally grown produce to area hospitals, schools, businesses, and residents. The greenhouse employs five local residents and is organized as a for-profit worker-owned cooperative business.

The greenhouse will produce an estimated 250,000 plants a year (lettuce, greens, and herbs). Fred Rose, co-director of Wellspring Cooperative Corporation, the parent organization of the greenhouse said the project was four years in the making. “It took us a long time to do the business plan, find land, and then a year of construction,” Rose said while standing inside the greenhouse. Wellspring raised $250,000 of the $1.5 million for the greenhouse project through a direct public offering to individual investors.

Wellspring Cooperative is creating an engine for new, community-based, worker-owned companies in inner-city Springfield, Massachusetts based on the purchasing power of area anchor institutions — the colleges, universities, and hospitals — that purchase more than $1.5 billion worth of goods and services a year.

The greenhouse will produce a variety of lettuces, greens and herbs year-round for customers that include the Springfield Public Schools, Baystate Medical Center, Mercy Hospital, Big Y markets, and regional food co-ops.

Rose said demand is strong and he’s confident the greenhouse will meet its sales projections.  “This is fresh. It can be picked and on the shelf the same day. Produce shipped from California loses half its nutritional value in the week it takes to get here,” explained Rose. “This is healthier, fresher and we know where it is coming from.”

The greenhouse is as much machine as a building. A motorized roof and a series of wall vents control temperature and humidity. The flow of nutrients and oxygen to the plants is mechanically regulated.

The vegetable beds sit on tables. A monorail system with baskets connects the growing and processing areas, so the produce never touches the ground. “You know with lettuce there is a lot of concern about contamination, so growing hydroponicaly it is clean, local and secure,” Rose said.  There are tentative plans to expand production in a few years to include cucumbers and tomatoes. 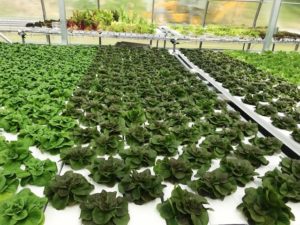 Wellspring’s Cooperative Greenhouse addresses a number of social and environmental needs in the region and will contribute to economic and ecological well-being. Wellspring responds to the need for environmentally sustainable, season-extending food production that can produce at scale so that New England can achieve greater food independence despite its short growing season.

Greenhouse production in Massachusetts remains small, with only 9 greenhouses in the state in 2007 of the size that Wellspring is proposing. Total production of greenhouse vegetables and herbs is less than 2% of the state’s agricultural production, while many greens and herbs are only available from farms for 30-50% of the year. Institutional markets can provide stable, large scale demand which will enable greenhouses to build the capacity to produce at scale, and therefore at more affordable prices.

The Wellspring urban greenhouse also responds to the urgent need to create entry-level jobs in Springfield and to enable workers to accumulate assets to invest in housing, education, and better health. Wellspring’s worker cooperatives provide job training and stable employment as well as profit sharing for low-income Springfield residents who have few opportunities to advance economically. Financial stability and employment are closely correlated with better eating and better health, and so Wellspring’s job creation work is an important complement to increased access to nutritious food in the city.

Finally, Wellspring will help hospitals, schools, universities and communities reach their public health goals. Institutional food purchasers are seeking local produce in response to a number of pressures, which is creating an unmet demand for year-round greenhouse production.

Hospitals have a new mandate to maintain population health in the federal Affordable Care Act, which means new attention to nutrition both inside the hospital and in the community as a critical element in addressing epidemic levels of obesity, diabetes, and heart disease. Public schools and colleges are also looking for healthier, fresh food alternatives in response to the demands of parents, students and health professionals. 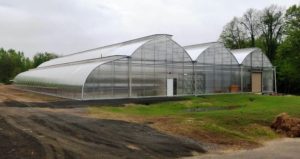 Four of the five people who work in the greenhouse live within walking distance. Migdalia Garcea has spent 20 years working in farm fields. She said the best part about the greenhouse is she doesn’t have to bend down and dig in the dirt.  “I am very happy here,” she said.

Alicia Brown had no agriculture experience before being hired at Wellspring. She’s excited about the prospect of one day being an owner of the business. “In a year, I know we could be part of the co-op and I am exicted about that,” said Brown.

Wellspring’s mission is to create a network of worker-owned enterprises in Springfield as vehicles to lift people out of poverty. The greenhouse joins a furniture upholstery shop and a window restoration business as part of the Wellspring network.

All images courtesy of Wellspring Cooperative.