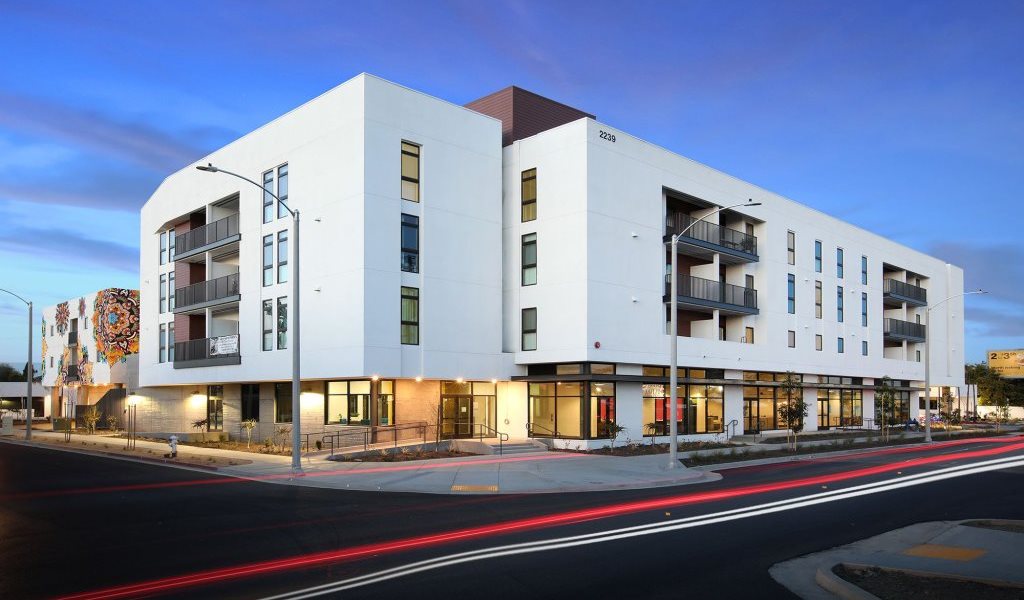 With the highest cost of housing in the nation, California’s affordable housing crisis is threatening the economic vitality and social fabric of the state, driving large employers and middle-income, skilled workers to relocate to states such as Nevada, Arizona, and Texas while also increasing homelessness and poverty. 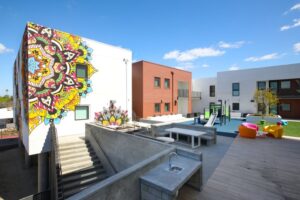 The second-floor children’s playground in the residential structure of the La Placita Cinco development. Maturing trees will provide a shady canopy throughout the development for years to come.

There are an estimated 66,000 strip shopping centers like this throughout the nation—many are often derelict or defunct but also ripe for redevelopment.

La Placito Cinco checks all the boxes: it provides much-needed affordable housing, a mix of uses, and public art—all in a position to revitalize a core neighborhood in the city. Plus, the development cherry on top: the project provides public space for community events like farmer’s markets, concerts, and other public gatherings.

The 2.25-acre site, formerly called “Tiny Tim Plaza,” replaces the former gas station and portion of the parking lot, with a vibrant new affordable community of 3-4 stories of 51 apartments.

It offers two-, three-, and four-bedroom units with ground floor community space shared by the community and neighborhood residents.

A gas station was razed to make room for the apartment building, which has 20 two-bedroom units, 29 three-bedroom apartments, and two four-bedroom units.

Finding a Balance Through Planning

Zoning changes were necessary to achieve the final vision for the project, a task made easier by the progressive development policies and politics of Santa Ana.

“Technically this project did not fit city planning and zoning regulations, but it transformed a deteriorating shopping center into a real community center and created much needed affordable housing,” explains Ali Pezeshkpour, principal planner for the city of Santa Ana. “What’s important is to identify good projects and facilitate them, as policies and codes are supposed to represent what we think is good and positive for the community.”

Pezeshkpour was a major force behind the project’s final design, entitlements, and community approval process. He says his planners worked closely with the developers and architects to create a plan that met the city’s housing needs. 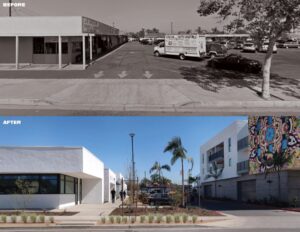 The developers preserved the La Placita Cinco site’s original commercial buildings and tenants; a big plus for the city. The project leverages the diverse commercial amenities already existing among the tenants including a restaurant, bakery, market, butcher, salon, and laundromat to tend to the community’s daily needs, creating, in effect, a neighborhood Main Street.

The development team initially proposed rehabbing the retail component, doing environmental cleanup of the abandoned gas station, and adding studio and one-bedroom affordable-housing units. “But that wasn’t what the city needed,” says Judson Brown, housing division manager for the city of Santa Ana.

Normally developers would scrape a site and start from scratch, but the developers proposed preserving the site’s original commercial buildings and tenants, which was big plus for the city, says Brown. The developers also improved the retail component, without raising tenant rents for three years, and preserved retail sales tax revenue generated for the city.

But more importantly, the retail improvements proved a very effective for providing affordable housing, so the city agreed to provide the $6 million grant, a zoning change from commercial to mixed-use, and assistance with the community approval process if the developers revised the plan to create affordable housing designed for families.

Brian Ulaszewski, principal and executive director of nonprofit urban design studio City Fabrick, suggests that revitalizing the retail component was a lever for the redevelopment, providing both a sustainable and practical solution, as the shopping center’s tenants had evolved over time to provide more than a dozen neighborhood-serving businesses, including a restaurant, bakery, market, butcher, salon, and laundromat.

Taking advantage of the pandemic lockdown, when nonessential businesses were closed, the developer phased renovation work by section and provided walkway access so retail tenants could remain open throughout the duration of construction.

“Our goal was to keep the retailers there and open,” says Kyle Paine, co-founder and president of CDP, noting that businesses were reimbursed for any extra expenses caused by construction, such as refrigerated supplies lost, and CDP covered the cost of insurance payments and utilities and paid their employees during the COVID-19 lockdown. “The fact that we were able to keep the existing business open during construction, was one of the most challenging aspects of this project, but also, one of the most rewarding.” 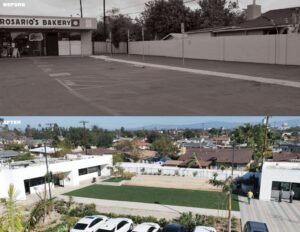 La Placita Cinco turned an auto-oriented parking lot into a more pedestrian-friendly environment. The remaining parking surface was redesigned to support active uses with wide, landscaped plazas along the retail facades to provide an opportunity for retail uses to spill out for an open-air market and outdoor restaurant seating or kiosks to be set up for a farmer’s market or special events.

The public art installations provide an eclectic extension of the surrounding community with a series of curated murals incorporating the city’s history and created by local artists.

The remaining parking surface was redesigned to support active uses with wide, landscaped plazas along the retail facades, also providing space for retail uses to spill out for an open-air market, restaurants to set up outdoor seating, and a location for farmers’ market or special events.

The project also incorporated a 36,700-square-foot mini park and open space between the two commercial buildings, providing community gathering space for socializing and hosting a variety of public and pop-up uses, such as fitness classes, outdoor movies, and concerts.

The park wraps around a central plaza with hardscape features that include an amphitheater with stadium seating built into a planter on the east property line.

The former service alley was transformed into an urban farm that provides produce for several on-site businesses.

Finally, the La Placita Cinco site is also adjacent to Orange County’s under construction 15-mile streetcar line, which will connect rail and bus routes in Orange County and beyond, including the Santa Ana Regional Transportation Center. This project is also within an easy walk of two streetcar stations to the north and south.

The project’s lender and investor partners worked to find solutions that supported both the new construction of affordable residential units and the retail plaza renovations, leveraging both traditional and innovative funding sources. The retail component secured financing with rents providing some leverage, for example.

A 9 percent tax-credit award, funding from the city of Santa Ana, and a cooperative lender and investor partners supported the project. Freddie Mac provided the long-term debt, R4 Capital provided Equity Tax Credits, Citibank provided construction financing, and the city of Santa Ana provided a $6 million grant of Low- and Moderate-Income Housing Asset and Inclusionary Housing funds to ensure the financial feasibility of the project.

Additionally, the Wells Fargo Foundation provided a grant to City Fabrick to work with existing small businesses on new branding and signage for the commercial buildings’ rehabilitation.

Linda Nguyen, vice president of Community Relations at Wells Fargo Foundation, notes that this grant focused on the project’s retail businesses because they not only meet the everyday needs of residents, but mom and pop shops are embedded in the neighborhood’s social milieu.

“The grants serve as a catalyst for a paradigm shift in thinking about community development and how grant funding can be leveraged to compliment housing development projects’ financing beyond tax credits and loans,” Nguyen adds.

By leveraging under-utilized commercial properties, La Placita Cinco has emerged as a successful example of redevelopment that integrates much-needed affordable housing. The project can serve as a model for strip retail centers nationwide with similar characteristics—namely a large, underutilized parking lot and a housing market sorely in need of new affordable housing.

Tim Mustard is a Principal at TCA Architects. Founded in 1993, TCA Architects are nationally recognized leaders in high-density, mixed-use, multifamily housing, and signature hospitality environments. The firm’s collaborative approach and industry leading technological expertise have resulted in award-winning, sustainable projects that respect our communities and the environment. With studios located in Oakland, Los Angeles and Irvine, California, TCA is one of the nation’s fastest growing architectural firms.

This article originally appeared in Planetizen. Reprinted here by permission.