In November of 2020 in Toledo, Ohio, the Local Initiatives Support Corporation (LISC) – Toledo–along with with ARK Development and other partners—celebrated as construction began on a $7.5 million mixed-use redevelopment of the former Wonder Bread and Hostess products factory on the riverfront in the Vistula neighborhood. 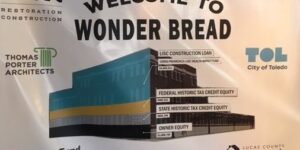 “LISC is proud to use the tools at our disposal as a CDFI to support Wonder Bread and ARK Development,” said Maurice Jones, President and CEO of LISC. “The project is exemplar of our mission to support under-resourced people and places, as well as build capacity of locally-owned developers led by women and people of color.”

ARK Development is led by Ambrea Mikolajczyk with Kevin Mikolajczyk. The couple began rehabbing homes, and in just over a decade, their company has expanded to include construction, property management, and real estate development arms.

Toledo Mayor Wade Kapszukiewicz thanked LISC and Ambrea and Kevin Mikolajczyk, saying “The historic Vistula neighborhood is critically important to our city and is well positioned to benefit from the great resurgence of investment downtown in recent years. This mixed-used redevelopment project is a significant investment for Vistula and an important catalyst for similar economic development and job creation.”

Wonder Bread is ARK’s most ambitious project yet. Ambrea notes, “Kevin and I are fortunate to have the support of so many community partners who came together to help us creatively figure out the capital stack. It’s an honor to develop and preserve the former Wonder Bread factory which is a part of Toledo’s rich history in Historic Vistula.”

Built in 1924, the former Wonder Bread property at 1119 N Summit Street is listed on the National Register of Historic Places. Plans to transform the long-vacant property into 33 rental units and 4000 square feet of commercial space have only come to fruition through the support of many partners, including the City of Toledo, ProMedica, Finance Fund, the Lucas County Land Bank, and historic tax credit investors.

“At ProMedica, we are proud to help support this type of revitalization project in such a historic and valuable Toledo neighborhood,” said Kate Sommerfeld, President of Social Determinants of Health at ProMedica.

“We greatly value our partnerships with LISC and the community. Our collective ability to leverage this type of investment will not only help revitalize and reinvest in a neighborhood, but will also have so many ripple effects in improving the health, well-being, and opportunities for our neighbors,” she added.

ARK initially acquired the property from the Lucas County Land Bank in 2017. The Land Bank has continued to support ARK as well as the project. ARK leases mixed-income residential properties to individuals, and acquires and renovates properties for new development.

ARK Development leaders say the company was founded out of a passion to restore and preserve old architecture. The company’s mission is to revitalize and maintain properties while strengthening the community. ARK is both certified as Minority Business Enterprise (MBE) and Women Business Enterprise (WBE). Their team maintains and improves properties, and all that comes with it: leasing, compliance, maintenance, financials, construction, historic renovations, and acquisitions.

President and CEO of the Lucas County Land Bank David Mann said, “If all it took to make a difference was an old building, the Land Bank would solve all our problems. In reality, it takes guts, creativity, and hard-earned investment. That’s why we are so proud of Ambrea and Kevin and their entire team for bringing this property back to life and changing the Vistula neighborhood for the better.”

LISC is a community development financial institution (CDFI). With residents and partners, LISC forges resilient and inclusive communities of opportunity across America–great places to live, work, visit, do business, and raise families. Since 1979, LISC has invested $22 billion to build or rehab more than 419,000 affordable homes and apartments and develop 70.3 million square feet of retail, community, and educational space across the country. In Toledo, LISC has focused on a comprehensive approach to community development, investing nearly $200 million since 1989 to fuel economic opportunity and build stronger, healthier neighborhoods.