Here’s something worthy of note. The federal government has awarded over one billion dollars to a nationwide slate of resilience projects since the start of August of this year.

The objective, of course, is to incentivize public officials to focus on protections that will lessen the public danger and minimize the extremely high costs associated with damage repair after natural disasters.

The regional water authority in Miami-Dade County received one of the largest grant awards. The $50 million will be used to support a plan designed to lessen the risk of flooding and sea level rise.

The project will include building a living shoreline, elevating canal banks, constructing a tie back levee, and replacing a pump station to redirect water. A project launch is scheduled for some time in 2023.

Another $20 million was allocated to the District of Columbia Water and Sewer Authority to build a different type of floodwall to protect one of the world’s largest wastewater treatment plants.

The funding will be consolidated with other revenue and used for construction of a floodwall to surround the Blue Plains Advanced Wastewater Treatment Plant. Project costs have been estimated at $29 million.

Once completed, the floodwall will mitigate the risks of a 500-year flood event to make sure the plant can survive and continue to serve an essential population hub. Officials with the regional water authority are scoping the project for design-build delivery and a procurement period is tentatively slated for 2023. 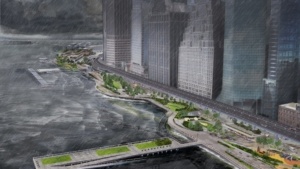 Photo courtesy of the City of New York.

The city of New York was awarded $50 million for a Seaport Coastal Resiliency Project. This is just one project in the city’s coastal resiliency plan which outlines $900 million in capital projects.

The recent federal award will supplement an initial $110 million that the city has secured for the project. City leaders will move the project through permitting and detailed design work and begin work with contractors in 2023 to expand waterfront access, reduce coastal erosion, and safeguard local marine habitats.

Another smaller grant award of $15 million will be used for a project in New York City’s Bronx borough. This project will be designed to protect regional food supplies from weather hazards.

The funding will be added to other revenue and a $90 million project will be launched to floodproof and harden buildings that make up the Food Distribution Center (FDC), one of the largest food distribution centers in the world.

During seismic events and other natural disasters, the proposed 12,000-foot pipeline will be made secure to ensure continuity of water for approximately 621,000 people residing in the Weber Basin Water Conservancy District region.

A FEMA award of $16 million is advancing the design process for a plan to mitigate risks of flooding from both seismic activity and sea level rise in Belvedere, California. The city’s two-phased resilience plan includes a Lagoon Coastal Levee System Resiliency project.

This project will involve raising and reinforcing an existing levee that has become operationally deficient. The upgraded system will be designed to protect life, property, and critical services from flooding along city shorelines and lagoons. It will bring critical resilience measures to two especially vulnerable islands that make up the city of Belvedere.

A resilience project is planned for Aberdeen, Washington. Earlier this month, the city received funding that will cover 70 percent of the project’s estimated $71 million cost.

The effort will include construction of a new floodwall and levee systems. Officials forecast that design and right-of-way acquisition processes will be completed in time to bid out construction work in 2023.

Many public officials are already planning for the next phase of the FEMA funding which will begin in September 2022 and continue until the end of January 2023.

FEMA’s next funding phase will have a larger amount of revenue to allocate – $3.1 billion as compared to $1.2 billion from this current round. That locks in thousands of new contracting opportunities for private sector firms interested in partnering with public entities.

Officials in the city of Olympia are among other city leaders who are eager to compete for the funding. A long list of upcoming resilience projects has been developed for Olympia.

Similar planned projects are being outlined by public officials in almost every state in the U.S. This funding is expected to continue as climate conditions become more volatile. FEMA has been designated as the agency charged with re-shaping how communities “build to last.”