The Gambia (officially the Republic of The Gambia), is a country in West Africa that’s entirely surrounded by Senegal except for its coastline on the Atlantic Ocean at its western end. It’s the smallest country in mainland Africa.

The Gambia is situated on either side of the Gambia River, which flows through the center of the country and empties into the Atlantic Ocean. The Gambia’s land mass is 10,689 square kilometers (4,127 sq mi), and it had a population of 1,857,181 as of 2013.

In January of 2018, UN Environment launched the largest natural resource redevelopment project in the history of The Gambia to help the nation tackle climate change impacts and restore degraded forests, farmland and coastal zones.

Funded by a $20.5 million Green Climate Fund (GCF) grant and $5 million from the Government of the Gambia, the Large-scale Ecosystem-based Adaptation Project in The Gambia (EbA) was launched in the nation’s capital, Banjul.

“This project is the single-largest natural resource development project ever launched in the history of the development of this country and funded by the GCF”, Lamin Dibba, The Gambia’s Minister of Environment, Climate Change and Natural Resources, told fellow ministers, representatives from the UN and GCF and other stakeholders who were present at the launch. 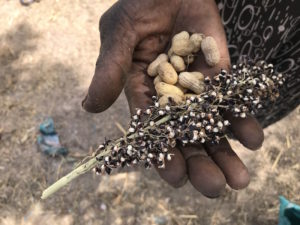 Thanks to training from UN Environment, farmers in The Gambia’s Lower River Region are planting more climate-resilient sorghum and groundnut crops that won’t fail in shorter rains or longer droughts.

Minister Dibba said the project was designed to build the climate resilience of Gambian people made increasingly vulnerable by a loss of soil fertility and agricultural productivity due to environmental degradation, more frequent and severe droughts and rising sea levels.

“The livelihoods of [the] majority of rural Gambians are eroding as a result of the degrading environment and the country’s dwindling natural resource base, on which most of these communities depend for their survival,” he said.

“The EbA project shall rehabilitate up to 10,000 hectares of degraded forest and wildlife parks through reforestation, enrichment planting, conservation of rare or endangered species as well as the restoration of 3,000 hectares of abandoned and marginal agricultural lands”, he added. 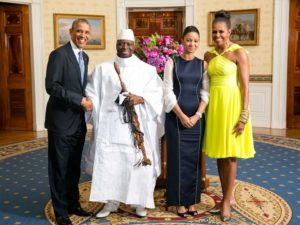 Yahya Jammeh, President of The Gambia from 1996-2017 and Mrs. Zeineb Jammeh with Barack and Michelle Obama in the White House, August 2014. Photo courtesy of the Office of the White House (Amanda Lucidon).

The six-year project should directly benefit up to 11,550 Gambian households and potentially reach a further 46,200 households indirectly. The beneficiaries will be spread across four target regions lying along The Gambia River in a small country of seven regions, and over half of them will be women.

“The project will use large-scale Ecosystem-based Adaptation – a cost-effective and low-risk approach to adaptation – to build the climate-resilience of rural Gambian communities and facilitate the development of a sustainable natural resource-based economy within and next to agricultural land, community-managed forest reserves and wildlife conservation areas”, said Ermira Fida, UN Environment’s Green Climate Fund Coordinator. “A project of this type and size has no precedent in the Gambia and is an emerging field in climate change adaptation”, she added.

Pa Ousman Jarju, GCF’s Director of Country Programming Division, said the project is strengthening the government’s mainstreaming of climate change adaptation across all levels of government. “I am pleased to see this remains a major government priority,” in a country that relies on agriculture for around 40 per cent of its exports and 26 per cent of its gross domestic product,” he said.