Erie is a city on Lake Erie in Erie County, Pennsylvania. Eerie coincidence?

The city and county are actually named for both the lake and the Native American tribe that resided there previously. (We Americans love to name our cities—and our housing developments—after whatever we destroyed to create them.)

Erie is the fourth-largest city in Pennsylvania, with a population of just under 100,000.

Erie’s manufacturing sector remains prominent in the local economy, although health care, higher education, technology, service industries, and tourism are all emerging to diversify their economic base. Over four million people visit Erie during summer months for recreation at Presque Isle State Park. 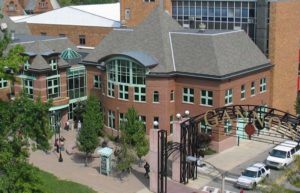 The university’s trustees are “all in” on the EDDC’s plans to spur economic development by revitalizing Erie’s core, says university President Keith Taylor, who is a member of EDDC’s advisory board.

Erie Downtown Development partners include organizations fighting neighborhood blight; the Erie Downtown Partnership/Perry Square Alliance; other educational institutions; and businesses downtown and beyond. “It’s really about collaboration and partnerships,” Taylor said. “This is a mosaic of institutions and organizations all linked together to build a vibrant downtown Erie.”

Erie started as a ship builder’s paradise, and has grown into a town that still offers slices of heaven. Locals and tourists alike love the protective bay and peninsula that made it ideal for ship builders – though today it primarily serves outdoor enthusiasts beach partiers.

Pennsylvania’s only port city on the Great Lakes, Erie has a rich history in arts and culture, as well as generosity and resiliency. With a sturdy foundation, Erie leaders feel the city is primed to realize its maximum potential.

Many private residents, companies and organizations have recently stepped up to build that potential. More than $600 million was committed to improving the city in 2016 alone. While having the resources to develop Erie’s assets is critical, so is that collaboration.

The newly founded EDDC, a privately funded nonprofit led by a group of business and community leaders, is working towards transformational change. The EDDC’s core mission is to fuel economic growth through real estate development in downtown Erie. The objective is to fuel Erie’s overall revitalization. EDDC plans to develop real estate to increase the tax base and potential for mixed-income housing retail, dining and arts and culture to flourish.

Gannon is a Catholic, Diocesan university dedicated to excellence in teaching, scholarship and service. Their faculty and staff prepare students to be global citizens through programs grounded in the liberal arts and sciences and professional specializations. In contrast to the fact-free, anti-science trend among many modern fundamentalists (of all faiths), Gannon is inspired by the Catholic Intellectual Tradition. They offer a comprehensive, values-centered learning experience that emphasizes faith, leadership, inclusiveness and social responsibility.