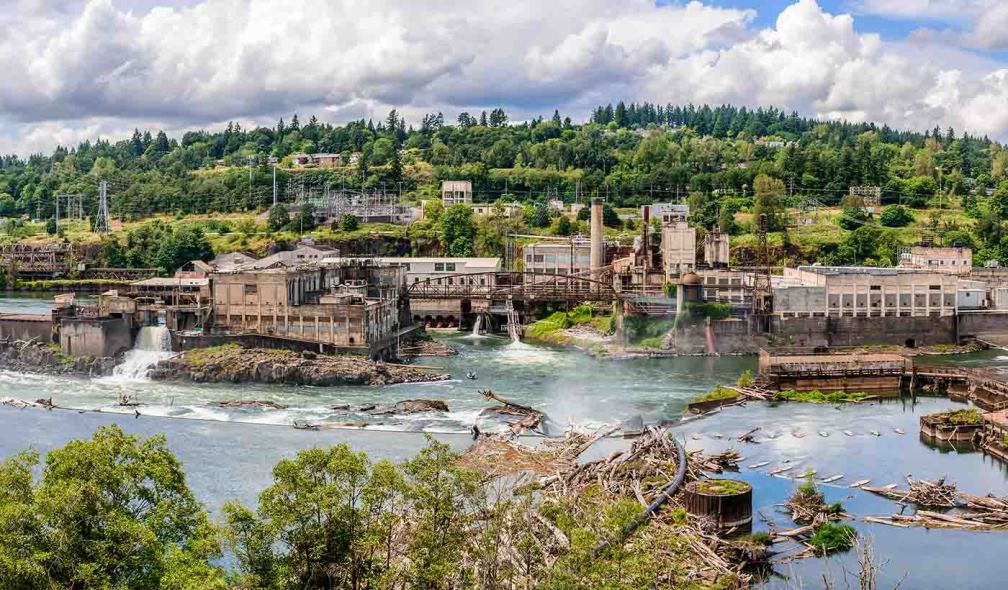 Global engineering and design firm Stantec is working with the Confederated Tribes of the Grand Ronde Community of Oregon to remediate and revitalize the former Blue Heron Mill—one of Oregon’s most noteworthy brownfield sites—into a multiuse community gathering space.

The firm helped secure federal funding through the U.S. Environmental Protection Agency (EPA) Brownfields Grant Program, and will work closely with the Tribe and the EPA to help deliver the Tribe’s vision for this transformational project.

In 2011, the Blue Heron Paper Mill succumbed to economic changes and announced its shutdown. The site has been vacant since then, leaving a legacy of environmental impacts on the land and in the Willamette River.

Located about 15 miles south of Portland, the Mill and surrounding area is a 23‐acre industrial wasteland on a rocky outcrop along the river, wedged between downtown Oregon City and Willamette Falls, one of the nation’s most unique historic and natural treasures. Willamette Falls is the second largest waterfall by volume nationally, second only to Niagara Falls.

The vacant space features a dense cluster of skeletal buildings, smokestacks, and dilapidated buildings along the degraded riverfront.

In 2019, the Tribe purchased the site within its ancestral homelands to steward the land and help heal and restore it to its rich cultural past.

The Tribe is currently exploring the highest and best uses for the property, but its current condition constrains potential economic opportunities both for the Tribe and the surrounding Portland metro area.

The $800,000 in federal funding—secured through an EPA Brownfield Multipurpose Grant—will be used to reimagine the former Blue Heron Mill site as an extension of downtown Oregon City and a regional destination that honors the area’s culture and history, while serving as an economic catalyst.

Potential elements of the reuse plan include the creation of a multi‐use path that will provide visitors with riverfront access and an up‐close view of historic Willamette Falls; an enhanced riverbank reflecting the historic pathways of water from the falls; various open spaces; as well as new buildings for potential office, retail, residential, or hotel use.

The team hopes to include adaptive re‐use of selected existing buildings, while activating a network of pedestrian‐and bike‐friendly streets.

“The Blue Heron Mill site and Willamette Falls have an incredibly rich history intrinsically tied to the culture of The Confederated Tribes of Grand Ronde,” said Carrie Rackey, a Project Manager in Stantec’s Environmental Services group.

“We are thrilled to support the Tribe’s vision, reimagining the space to serve as a gathering place and economic catalyst for the greater Portland Region, while respecting the surrounding land and its immeasurable importance to the Tribe,” she added.