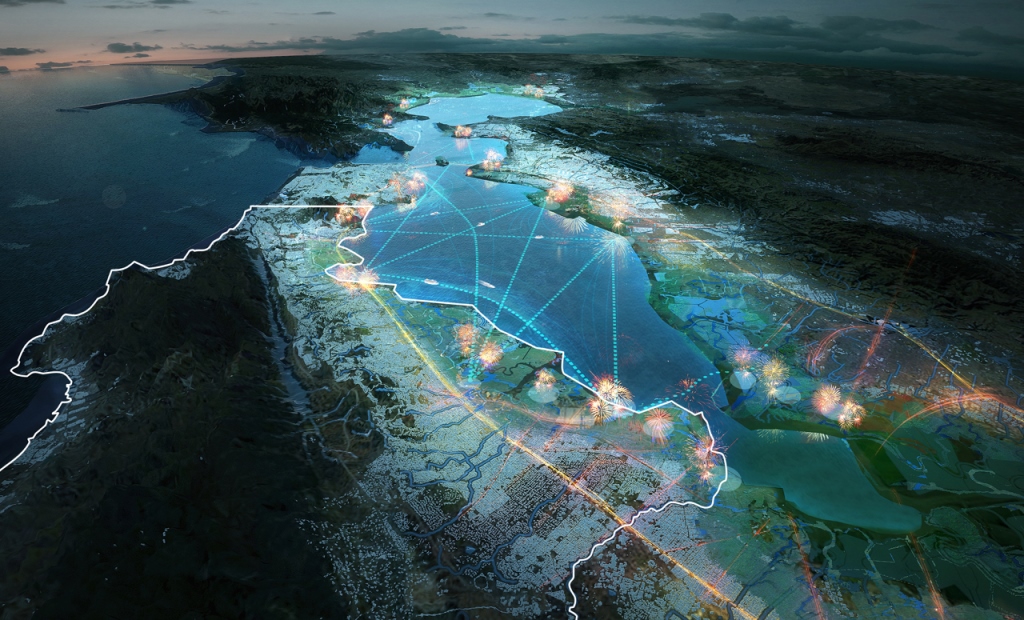 Major freeways and rail lines link the city to the region, but they also divide parts of the local area. Over the last half-century, as with many cities across America, local residents have lost their historic and valuable connection to the water. Parts of the community suffer from flooding and have limited access to a shoreline blocked by industry.

Amsterdam-based architecture and planning firm MVRDV, as part of the international design team HASSELL+ (comprising (HASSELL, Deltares, Goudappel, Lotus Water, Hatch, Civic Edge, Idyllist and Page & Turnbull), is now entering the next phase of their work to make the San Francisco Bay area more resilient. Much of their design follows the 3Re Strategy (repurpose, renew, reconnect). 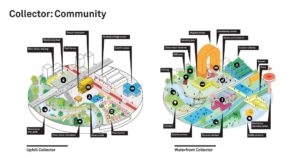 This phase will “collect and connect” communities in South San Francisco as part of their proposal for the Resilient by Design Bay Area Challenge. The site allocation of San Mateo County marks the next phase of Resilient by Design, a research and design project that has community members and public officials working together with local, national and international experts to tackle the challenges of climate change and ecological disaster around San Francisco Bay. Like the entire Bay Area, San Mateo County is at risk of sea level rise and seismic events.

“Climate change is real, by the end of the century there will be a sea level rise of 2 meters. Bay Area communities respond to this challenge in a multi-disciplinary approach to upgrade their general resilience” adds Nathalie de Vries, MVRDV co-founder. “We developed a flexible toolbox for San Mateo which helps the local community by revitalizing public spaces that collect and connect people and water.”

“San Mateo County is the perfect testing ground for solutions that could unlock potential for shoreline communities around the entire Bay Area,” adds Richard Mullane, principal at HASSELL, the Australian-based firm leading the HASSELL+ team.

Revitalized public spaces that collect and connect people and water.

For the collaborative research phase of the competition, HASSELL+ re-imagined a series of San Francisco waterfront communities as vibrant, fundamentally public places primed for everyday use – but also vital for environmental and emergency needs. Their response was inspired by the way the region’s communities used open spaces during both the 1906 San Francisco earthquake – one of the deadliest in US history – and the recent, devastating Northern California wildfires.

HASSELL+ envisioned a network structure of green spaces, creeks and revived high streets that would serve as points of collection, connection and water management from the ridgeline to the shoreline and across the bay via an enhanced ferry network. Recharged ‘connectors’ – streets and creeks – and new ‘collectors’ – responsive, adaptable open spaces – would become places for everyday gathering, big events and disaster assembly. Together, they could ultimately make the Bay Area more physically and socially resilient.

Sites and programs co-designed with the local community.

The team now has the opportunity to apply its ‘collect and connect’ toolkit to proposed sites in South San Francisco. At Colma Creek, HASSELL+ has imagined a new Shoreline Park. Meanwhile, Grand Avenue will become a vital community hub with a drop-in storefront people can visit during the design phase. The team’s design process will draw heavily on local voices and insights to ensure that design solutions – which will be presented in May – reflect the community’s needs. In addition to the drop-in centre, city residents will be able to access a digital platform to learn about adapting for resilience and get involved in decision making.

Since the challenge launched last May, it’s received an outpouring of support from elected officials across all nine counties in the Bay Area. San Mateo County Board of Supervisors President Dave Pine sees it as an opportunity to draw on the technical expertise of design teams, think creatively, and ultimately, create lasting change in the county.

The team headed by HASSELL are one of ten teams selected by Resilient by Design, modelled after the successful Rebuild by Design challenge that addressed infrastructure needs in New York, New Jersey, and Connecticut following the devastation caused by Hurricane Sandy. The program is tied to The Rockefeller Foundation’s 100 Resilient Cities network, which aims to support 100 cities to build resilience for the 21st-century.