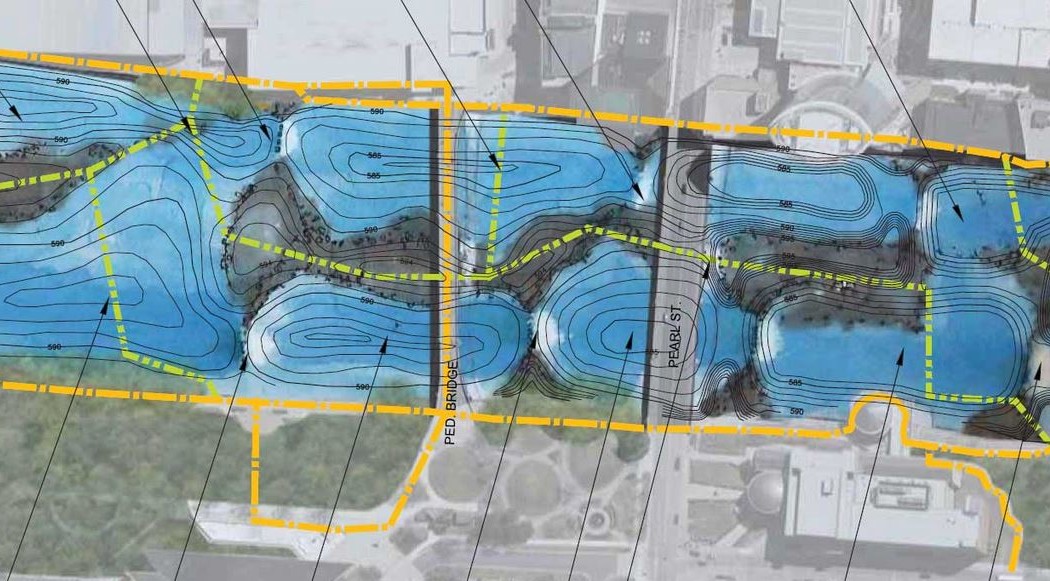 I thank Jay Steffen (Assistant Planning Director at the City of Grand Rapids) and Steven Guitar (Communications Director) for supplying this information. It’s not often one encounters a city that’s wise enough to create a strategy for economic revitalization and quality of life enhancement based on the restoration of its natural resources.

The fact that one of my favorite non-profits–The Trust for Public Land–is involved is just icing on the cake. Congratulations, Grand Rapids!

“Restoring the rapids to the Grand River will be an important catalyst for the continued revitalization of the region’s downtown. The City is pleased to be a partner in this historic effort,” says Grand Rapids Mayor George Heartwell.

Grand Rapids Whitewater has released a preliminary plan to restore the rapids to the Grand River in downtown Grand Rapids. The plan is based on two years of scientific and engineering studies that evaluated the river bottom, sediment, wildlife and other factors to understand the river. The plan illustrates opportunities for recreation and rapids habitat restoration from Ann St (N) to Fulton St (S) and will create a one-of-a-kind centerpiece for our city.

In its Final Report, the GRRSC recommended that the Grand Rapids City Commission authorize a transitional role for a successor to the Steering Committee and suggested it be named the Grand River Corridor Revitalization Committee (GRCRC). It also suggested that the new GRCRC work with key partners including the City of Grand Rapids and Grand Rapids Whitewater to develop a Memorandum of Understanding with Trust for Public Land (TPL) to secure private philanthropic funding to support the Grand River Corridor Revitalization Committee’s work, act as interim fiscal agency, and provide project management of the rapids restoration project. 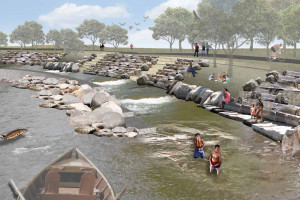 Assistant Planning Director Jay Steffen told the Commission that the Steering Committee further recommended that the new Grand River Corridor Revitalization Committee, supported by TPL, should explore the future formation of a “conservancy-like” organization to operate, maintain and sustain the improvements in the river and on the banks, and the establishment of a complementary “recreational authority”-like organization inclusive of key government jurisdictions upstream and downstream of Grand Rapids. “The entity or entities assigned to manage the oversight and coordination of the river corridor projects must work in partnership with others to closely monitor water quality and support both regional and local efforts to minimize pollutants to the Grand River,” Steffen said.

In accepting the report, a grateful Mayor Heartwell said that the River Restoration Steering Committee played a vital role in assuring coordination between river restoration and the GRForward visioning process for the downtown and river corridor. “The Steering Committee has played a critical role in assuring a common vision that advances broad and diverse community interests and the effective alignment of various projects related to river restoration,” Heartwell said. “This Steering Committee served as a resource to advise the City Commission regarding the Grand Rapids White Water plan, permits, funding, project staging, construction, maintenance, and operations of any projects associated with the Grand River.”

GRWW cofounders, Chris Muller and Chip Richards, have spearheaded a plan to restore the rapids to the river driving positive economic, environmental and educational opportunities for the region and enhancing recreational enjoyment of the river for everyone. Muller said, “We fully support the Steering Committee’s recommendations and look forward to working with the Grand River Corridor Revitalization Committee and, ultimately, the Trust for Public Land to maximize the economic, environmental, educational and recreational opportunities down the road.”

The Steering Committee, co-chaired by Fred Keller and Joe Jones, also included leaders from local, state, tribal and federal governments, businesses, community groups, river user groups, conservation and environmental organizations. During 11 meetings, the group appointed two work groups; an Organizational Models and a Water Quality work group. It speaking today to the Commission about the Grand River Restoration Project, Co-chair Keller said, “It’s truly a wonderful project and will impact the city for a long, long time. I’m absolutely convinced, as a citizen of this community that this project will go very smoothly. Our committee identified all of the potential future issues and identified at least all of the plans for addressing those issues.”

Fellow Co-chair Jones also shared his enthusiasm about the project in the future. “From the very beginning, we recognized the multiple opportunities that are at play here with all of the plans for development of the river and worked diligently to ensure the different plans were coordinated. This has been a very complex planning process with a lot of moving parts. I’ve said it before and I will say it again, that going forward, we will leave no stone unturned in our effort try to find the necessary resources to provide for the proper restoration of our Grand River.”