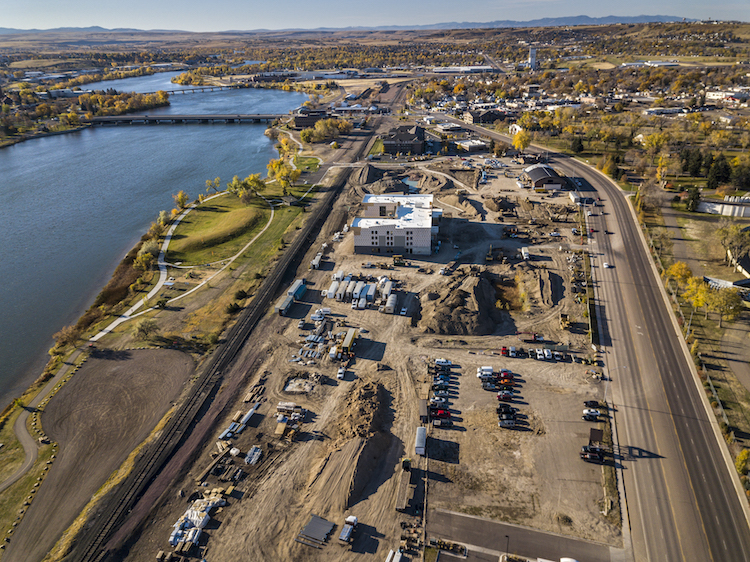 West Bank Landing is a riverfront brownfields redevelopment in Great Falls, Montana. This mixed-use project is being spearheaded by West Bank LLC and supported by the Great Falls Montana Development Authority.

The Great Falls Montana Development Authority (GFMDA) has been working to revitalize the entirety of the 65-acre riverfront area for more than 15 years. The economic development group assembled public and private partners and secured an EDA grant that drew business to the area and inspired investment while remedying the economic contamination of the land.

In an interview with REVITALIZATION, Brett Doney, the CEO of GFMDA said “Perseverance was key. The contamination challenge was compounded by multiple property owners, some of whom were difficult to track down.”

“Renewed confidence in the local future was the turning point. The Great Falls economy had been stagnant for decades, so private developers saw little upside to local property investment. But steady economic progress in recent years has raised optimism about the future of the area, and that made this property more attractive. Local spending power has also increased, which raised the quality and price points of the residential units,” he continued.

Once complete, the site will include 75,000 square-feet of retail space, more than 100,000 square-feet of office space anchored by a 132-unit, four-story Marriott Springhill Suites hotel and a 15,733 square-foot historic building renovation into The Peak at West Bank Landing, a boutique fitness center. 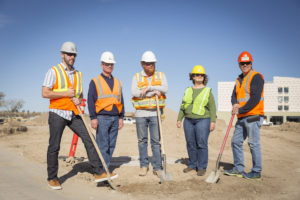 On October 23, 2017, developers broke ground on a new 33,468 square-foot, $5.5 million mixed-use retail/office building at West Bank Landing. Slated for completion in July 2018, the new building is part of a $65 million multi-phased effort to revitalize this 12.5-acre former industrial site along the Missouri River.

“With the addition of this new office and retail space in West Bank Landing, we are making good on our commitment to transform the riverfront into a vibrant, dynamic area,” says Brett Doney, president of the Great Falls Montana Development Authority. “The West Bank Landing location will soon become a must-see landmark for Great Falls and help boost tax revenues in the region.” 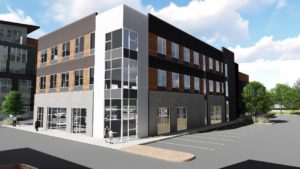 Nestled between Third Street Northwest and West Bank Park, the site was previously the location of an oil refinery in the 1930s that contaminated the property with gasoline, diesel fuel and chemicals. Other industrial users left additional hazardous wastes.

“Our investors are all long-time residents of Great Falls with a desire to clean up and enhance the west bank of the Missouri River, which runs through our city. We saw a need for a project that brought together professional office space, condominium-style living, a fitness center, boutique markets and casual dining,” says Jeremiah Johnson, marketing and promotion director for West Bank Landing.

A group of investors making up West Bank, LLC, including Spencer Woith, Joe Aline, Brad Talcott and Linda Caricaburu, came together in June 2014 to buy the property from Cascade County.

They used tax increment financing (TIF) funds and grants from the Environmental Protection Agency’s Brownfields Program to help finance the cleaning of the site. The Great Falls Montana Development Authority provided a free brownfield assessment for the site, valued at over $150,000, and provided a $2.2 million bridge loan package for the cleanup and site infrastructure. All of this helped reduce risk for the private developers.

“We’ve been working concurrently with the Montana Department of Environmental Quality and the U.S. Environmental Protection Agency over the past year to clean up the site,” continues Johnson. “We’ve moved nearly 18,000 cubic yards of contaminated soil to develop an enticing location on the riverfront for businesses, tourists and residents.”

Mike Hollern, a landscape designer, sculptor and artist, was enlisted to beautify the exterior with materials including stones, repurposed metal and native Montana plants. Architecture firm L’Heureux Page Werner developed the master design plan for the site including an internal road and six different mixed-used buildings. 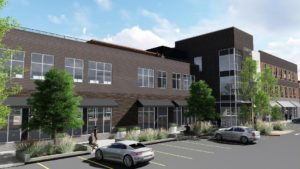 “Since 2002, we’ve been working diligently to revive the whole waterfront,” continues Doney. “We supported the development of West Bank One on the river in 2008 using a bridge loan and since then redevelopment has been booming, as exemplified by the construction at West Bank Landing. It’s truly a success story for Montana and there are many more waterfront redevelopment sites available.”

Construction on West Bank Landing is expected to be complete by 2022.

Founded in 1992, the Great Falls Montana Development Authority is an economic development organization that works to create higher paying jobs and promote growth and diversification throughout the Great Falls region of Montana. The public-private partnership includes a trade area of 13 counties that extend from the Eastern slope of the Rockies to the Canadian border. The Great Falls Montana Development Authority sees its role as engaging, leading, guiding and facilitating regional efforts to build a prosperous and sustainable future for its community.