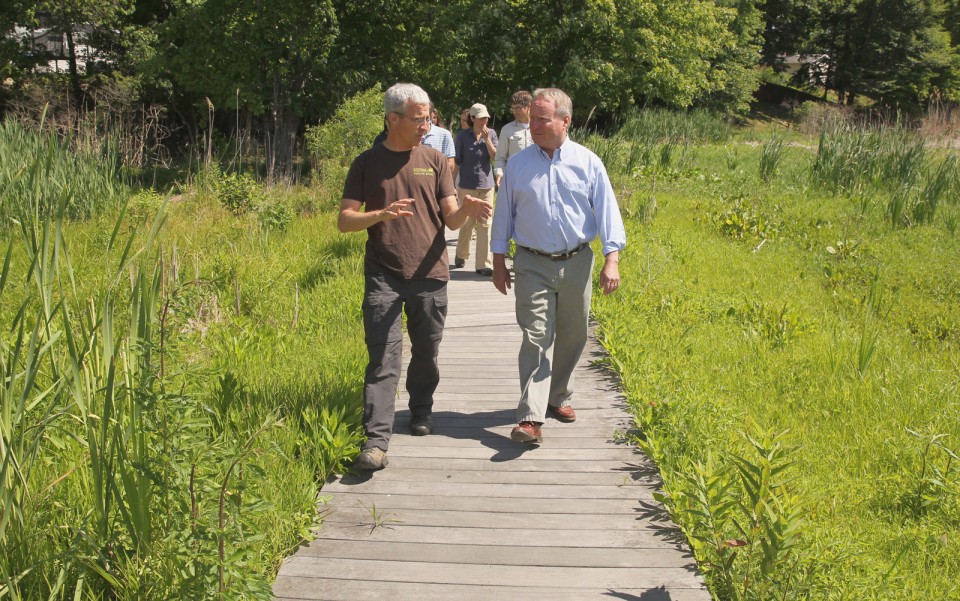 Nature is surprisingly resilient, and a prime example of a successful natural habitat restoration is underway at the once-devastated Mentor Marsh in Mentor, Ohio.

In the past few weeks alone, fish surveyors found 30 species of fish, including yellow perch and Northern pike potentially breeding at Shipman Pond.

And a photographer captured shots of a river otter on the boardwalk at the Wake Robin Trail that extends about 100 yards into the marsh.

On July 7, 2016, a group of the key people responsible for the restoration project gathered on the boardwalk to revel in how far the marsh has come over the past few years, and to discuss how far the marsh still has to go to reach its original pristine state.

In the coming years, the restoration team hopes to use $650,000 of federal grant money from the Great Lakes Restoration Initiative to buy and plant thousands of water-loving trees, such as Freeman maples, to replace the forests destroyed by salt that flowed from mines that lie about a half-mile under the area.

The phragmites and narrow-leaf cattails can survive in salty conditions that the native plants cannot tolerate.

Abe Bruckman, Mentor’s grants coordinator, said the marsh restoration could end up saving the city millions of dollars in losses that otherwise would have been suffered during the periodic fires that have struck the marsh 12 times since 1979, the last in 2003.

The marsh restoration actually began about eight years ago when Jim Bissell, the curator of botany and coordinator of natural areas for the Cleveland Museum of Natural History, supervised the removal of phragmites along the boardwalk.