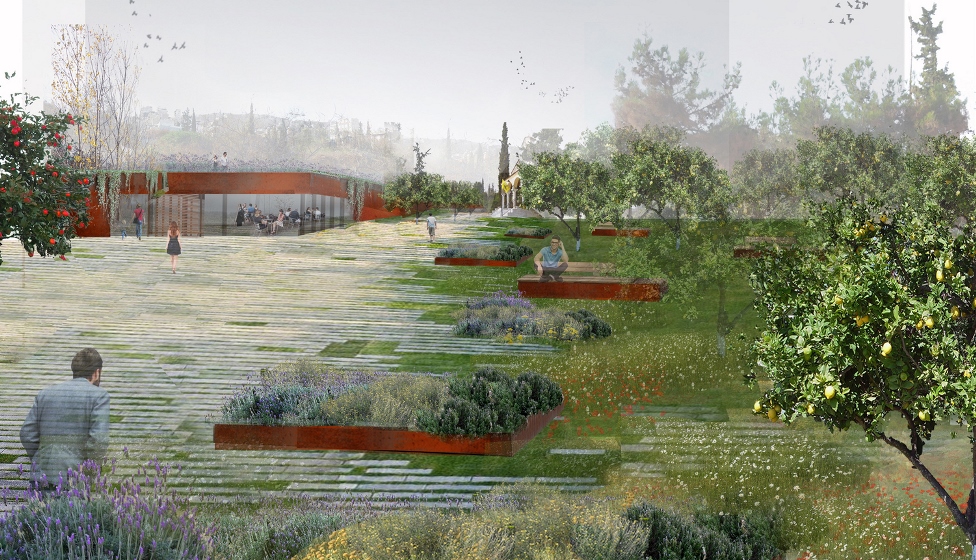 Katerina Andritsou, Panita Karamanea, and Thanasis Polyzoidiscomprise a team of architects and landscape architects that calls itself Topio7.

They’ve been doing some wonderfully regenerative work lately, such as their winning of a competition to reuse an abandoned Greek coal mine. Their design will turn it into an ecological corridor (documented in the previous issue of REVITALIZATION). 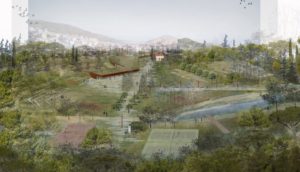 Now, the team has won another competition in Greece, this one to repurpose a former cemetery in Nikea, just west of central Athens. Topio7 was awarded 1st Prize at the competition for the “Regeneration and Reuse of the former Cemetery of Neapoli – Athens”.

They’ve proposed a number of green buffer zones – what the designers call “the elastic limit” – are utilized to frame a procession-like journey from the bustle of the city to the calm of the park’s landscape.

Highlighting the importance of the site’s previous use, the architects explain that the “main objective of the project is the creation of an open, accessible public space, a contemporary urban park with ecological-bioclimatic character, with special emphasis on the social dimension and the site’s memory.”

The competition’s site has a special importance for the city’s collective memory because of its past use as a cemetery. It is an enclosed and introverted space, characterized by isolation and melancholic memories, a place inaccessible to public use. In contrast to this current condition, the proposal envisions a mutual ‘osmosis’ between the park and the city, an ‘osmosis’ that will contribute to the revitalization and growth of the whole neighbourhood. Main objective of the project is the creation of an open, accessible public space, a contemporary urban park with ecological-bioclimatic character, with special emphasis on the social dimension and the site’s memory. Symbolically the idea regenerates space, proposing an “active ground”, a vivid natural park, a dynamic scenery that changes during the four seasons.

The park is organized by a series of successive circular zones that gradually lead the visitor from the city’s buzz to an enclosed landscape of recreation. At the border a perimetric promenade with entrance plazas is located and right afterwards a green buffer zone: the “elastic limit”. This filter of greenery leads to the main area of the park – a large clearing of rest areas and recreational zones, with a cafe-restaurant in the centre with corten steel fachades. It is an embedded in the topography landscape building, with a meadow for distant views at the roof. 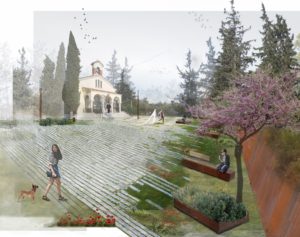 The linear cemetery axes are kept as a memory reference and constitute the main connecting promenades of the project. There are composed of cobblestone pieces with green joints covered with a mix of lawn and wildflowers. At the central square the existing cypresses are maintained and water jets are located as a symbol of rebirth. Various thematic landscape zones and uses are proposed, such as the Church plaza, the spectacles’ area where an amphitheatre is embedded in the landscape, Mediterranean gardens with rest areas, fruit trees gardens, clearings for outdoor uses and a small wetland.

In the “elastic” green zone the interconnection and ‘osmosis’ with the urban fabric is continuous. Various activities and uses are located at the shaded areas under the trees. New planting zones complement the existing vegetation, creating a green protecting filter from the city noise, a filter that also offers aesthetic visual delight. New proposed uses are: sports area with courts, playgrounds and outdoor gyms, picnic areas, α mountain bike track, domestic animals’ farm and a ‘Green Point’. Light construction versatile kiosks are proposed, in order to host various activities and needs: an information point, an animals’ nest, a small shop for open air – bazars.

At the limits between the green buffer zone and the central part of the park a path for wandering, jogging and cycling is located. It has a serpentine form and is made of stabilized soil. It runs through the different landscape zones and offers a slower walking experience of the constantly changing space.

Through landscape design and ecological practices, the design attempts to reconquer an inactive space and transform it to a vivid contemporary park.