This Guest Article for REVITALIZATION is by Päivi Raivio.

Just do an image search online on future cities and you will see that future cities are proposed to look much greener in addition to the futuristic architecture and high-tech solutions. 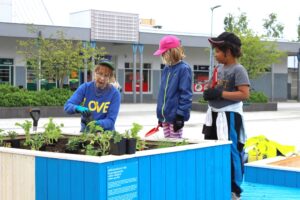 Zooming out towards the future cities indeed brings to mind some bold visions and large scale solutions, which seem out of reach, massively expensive and difficult to grasp.

Zooming closer, from a city vision into the neighborhood level scales big visions and solutions down to something much more obtainable and tangible.

The focus on neighborhoods in the field of city-making is gaining ground. Working on the neighborhood level, change in our cities can be much faster and inspire more action.

For example, the recent Oslo Architecture Triennale chose neighborhoods as the key themes for this year’s triennial.

“What’s interesting about the neighborhood scale is that it’s a scale you can actually affect. We can all take action to change our neighborhoods,” says Christian Pagh, the director and chief curator of the Oslo Architecture Triennale during a recent interview.

When the neighborhoods change, so does the city as a whole.

Where is the neighborhood?

According to Wikipedia, the neighborhood  is “a geographically localized community within a larger city, town, suburb or rural area, sometimes consisting of a single street and the buildings lining it.”

I think a sense of community, co-living and sharing can be localized in many, big or small, public places, whole blocks or even to the shared porch between two households. Instead of planning for efficiency and function-oriented, we should design housing and buildings for living – thus increase the sense of “neighborhoodness” in our cities. 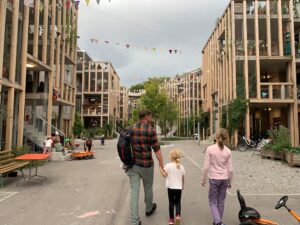 This is the case, for example, in the Huebergass housing block in the city of Bern, Switzerland which was designed with everyday life in mind. The social housing project has won many awards – and more importantly is highly liked and appreciated by the residents.

On our recent visit to the neighborhood, one could really feel the sense of community just by walking through the alley-like courtyard, with signs of everyday life everywhere.

And amongst it: cleverly placed mini-parks for shade and coolness, trees, planters for urban gardening, grooves for directing rainwaters into the green patches, wines climbing up the walls here and there. The greenery binds the different parts of the courtyard together.

Adding more plants and greenery is one of the key objectives in our placemaking and urban design projects for many reasons. First of all, citizens in most cities wish for more greenery in their living environment in urban areas.

Even in a fairly green city such as Helsinki, where the proximity to small parks and forests is close, residents want more green in their courtyards, streets, open squares and roof tops. 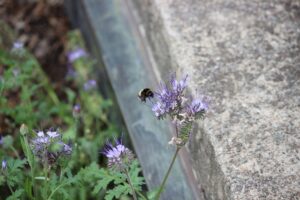 Pollinator on the rooftop of a power plant.Photo: Päivi Raivio.

Adding more greenery and rewilding of urban spaces and neighborhoods is responding to the needs and wishes of the people and supporting urban nature.

Plants and greenery have many other known benefits from supporting biodiversity of urban areas with native, pollinator friendly plants to having a cooling effect and managing some of the urban run-off waters.

Greening grey urban spaces is an effective way to repurpose land plots that have no other use and the collaborations can be surprising too: we worked with the Helsinki Energy company to turn an empty 800 sq. meter rooftop of a heating plant into a meadow with native plants. It’s a great example of how a “non place” can suddenly become vital.

Urban gardening is a great way to increase participation between the city and its residents: what most interests me is the interaction with the city and the place and how people collectively can turn a place around.

To see a fast change in our close environment and take active part in shaping our environment can be an empowering experience – an effective way to revitalize urban districts and places of all sizes. 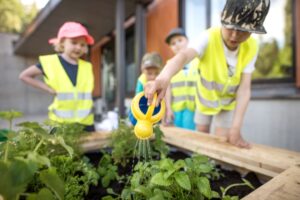 Connecting communities through local food and by learning about edible plants is a way to rethink what cities could be. A small neighborhood garden can be a link to one of the big city visions such as an edible city, where local food is grown in vast amounts.

Plants and trees are sparking what I like to call an instinctive interest in children. Children like to look, touch and smell plants – and discover small treasures like strawberries or ladybirds and observe the small miracles of growing something from a seed to a plant you can eat.

It’s crucial that our cities have plants one is allowed to touch and that are not there for only decoration: plants inspire play too and can even improve the immune system. According to a Finnish study, contact with soil and plants improved children’s immune system in just a month.

This is one more, and very important, reason to integrate plants and gardening to school and kindergarten yards as we did in the Green Kindergarten Yards -project during European Green Capital Year in Lahti.

Over the years, we have worked in many different types of urban spaces: streets, squares, waterfronts, yards and wastelands. Each project, space and community teaches us something more about creating more livable cities and we believe this knowledge could be integrated much more in the city planning processes and projects. 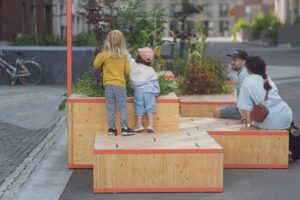 We have, for example, worked with a new district in Kalasatama, where we piloted our new concept of modular outdoor furniture, which enables more greenery including small trees in different sized urban spaces.

With modular solutions it is possible to reimagine and change urban environments without large scale, expensive solutions. Fast actions and experiments can also set the direction for long term development.

What we found out was that even a relatively small pocket park can connect new neighbors together in a new area where people are still getting to know each other.

The nearby residents also told us that they appreciated the new greener window views and families with small children started to visit the pocket park daily to, for example, follow the growth of the weird and wonderful watermelon. The small trees provided enough shade for a cooler moment and people collected herbs to cook with at home.

All this achieved with about 10 square meters of more seating and greenery. I find this an inspiring example of how we can work towards more liveable cities by turning small places around and repurposing different sized urban spaces. The key changing our cities is to work with scalable solutions and keep thinking big.

Portrait photo of Päivi Raivio is by Iiris Sjöblad.

Päivi Raivio is an urban designer and placemaker who works towards more inclusive and liveable cities by transforming public places with participatory methods.

She is the co-founder of the RaivioBumann creative placemaking studio and Parkly, a company which offers circular and modular outdoor furniture for green and welcoming public places.

Päivi has recently been awarded with the Helsinki Design Award 2022 for her work in urban design and she is a Leader in the Placemaking Europe network.