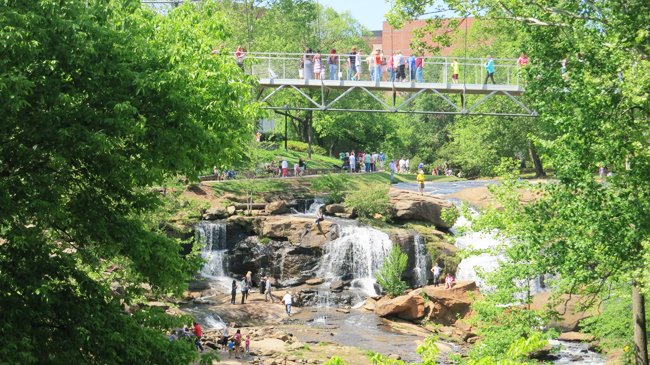 Note from Storm: This 11-year-old project isn’t new, but its lasting success makes it a great model for other communities. In my global travels as a speaker and consultant on both urban revitalization and nature restoration, I’m constantly surprised by the number of cities that ignore wonderfully-restorable natural features that could catalyze the rebirth of their downtowns.

Granted, some of these features aren’t even visible: sometimes a search of old city plans, historic photographs, or interviews with elderly residents is needed to discover that a now-buried stream used to run through a neighborhood. Others are more obvious, such as the straight, ugly, concrete-lined ditches that civil engineers long-ago created out of beautiful, meandering creeks.

Few activities can add as much to add quality of life to a downtown–making it a magnet for residents and businesses alike–than a restored natural feature, preferably with flowing water. Nature is beautiful wherever it is, but there’s something magical and the unexpected juxtaposition of the natural and built environments in densely-populated urban areas.

From the article: Located in the center of downtown Greenville, South Carolina, in the foothills of the Blue Ridge Mountains, Falls Park on the Reedy is an urban oasis and centerpiece for the city— thanks to the transformation of a forgotten 40-foot tall waterfall and overgrown river valley.

Development of the 26-acre park included replacing a four-lane vehicular bridge built directly over the falls with an elegant, curving, pedestrian suspension bridge designed by Boston-based Rosales+Partners. The award-winning bridge appears to float above the river, offering a dramatic overlook of the falls, and it has become a signature of the park and city.

The park, completed in 2004, is the realization of a vision that began with a 1907 “Beautifying and Improving Greenville, South Carolina” report sponsored by the local municipal league that identified the river falls and gorge as “the most distinctive feature in the topography and landscape of Greenville.”

Liberating the falls and creating a park was advanced by the Carolina Foothills Garden Club, which led an effort to establish the park beginning in 1967 and engaged Washington DC-based landscape architect Andrea Mains in 1987 to complete a master plan.